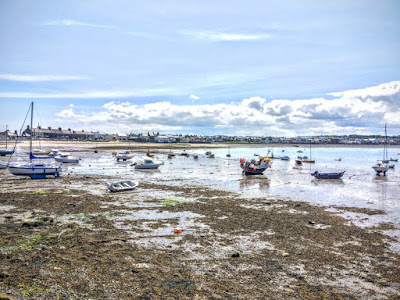 Summer sunshine and summer afternoons should provide more time for enjoying sailing and cricket. Just because I’m beyond taking part does not make me lazy. I had an enjoyable, relaxing Sunday afternoon today [14 June 2015], walking along the beach at Skerries, walking around the harbour, and then spending a little time watching Sunday afternoon cricket in Rush.

Earlier in the morning, I was in Christ Church Cathedral, where I was deacon at the Cathedral Eucharist, reading the Gospel (Mark 4: 26-34) and assisting with administration of Holy Communion.

The celebrant was the Revd Garth Bunting, the preacher was the Precentor, Canon Peter Campion, and the setting was the Missa Brevis S. Johannis de Deo by Franz Josef Haydn (1732–1809), sung by the Cathedral Choir

There was music too from Mozart, Orlando Gibbons, and Arthur Brown’s tune ‘Saffron Walden’ for the Communion Hymn, ‘Just as I am’ by Charlotte Elliott:

Just as I am, of that free love
The breadth, length, depth and height to prove,
Here for a season, then above,
O Lamb of God, I come.

I suppose I have come to love this hymn not only because of its associations with Saffron Walden, one of my favourite towns in East Anglia, but because of its incarnational call to acceptance of present limitations and gifts. 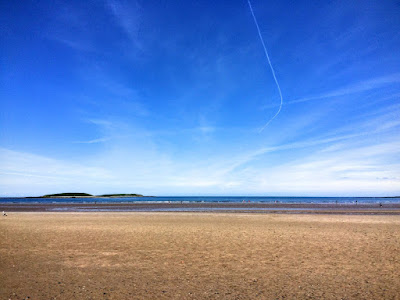 Walking on the beach in Skerries this afternoon (Photograph: Patrick Comerford, 2015)

Those words, ‘Here for a season,’ were an important reminder to accept the gifts of the present moment. After coffee in the crypt, instead of having lunch in the city centre, two of us drove out to Skerries, and had lunch in the garden courtyard behind the Olive before going for a walk on the beach.

The tide was out, the temperature had gone above 20, the skies and sea were blue, and families were enjoying the sand and the summer.

We cut back in behind the Sailing Club out onto the harbour, and around the pier. Out beyond the harbour, a small crew were rowing parallel to shore. Inside the harbour, one woman was paddling on a surfboard, a man was enjoying the pleasures of a small kayak, a seal was basking in the water, and one man was stretched out, enjoying the solitary pleasure of sitting in the sun alone on a small yacht tied up to the pier. 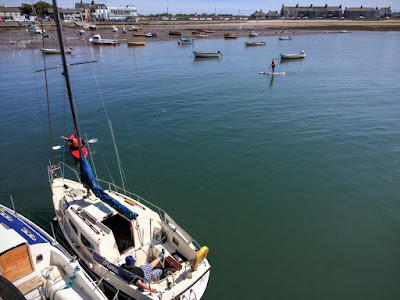 They were innocent pleasures, but it brought me back to the summer of 1966 and Sunny Afternoon by the Kinks, which went to No. 1 in the British Singles Chart on 7 July 1966, remaining there for two weeks, and to No 1 in Ireland on 18 July 1966:

The tax man’s taken all my dough,
And left me in my stately home,
Lazing on a sunny afternoon.
And I can’t sail my yacht,
He’s taken everything I’ve got,
All I’ve got’s this sunny afternoon.

Of course, the words by Ray Davies are a parody of the protests by the rich against the taxes introduced by Harold Wilson’s Labour government in the 1960s. They are not meant to evoke sympathy for the rich but to depict their contempt or even failure to understand the basic needs of the working class and the impoverished.

But lazing on a sunny afternoon in the summertime, watching those who might think of sailing away … or not sailing away … was a real pleasure in the warmth of summer this afternoon.

Later in the afternoon, we stopped to watch play at Rush Cricket Club, across the road from Kenure Parish Church.

Cricket is first mentioned in Fingal in the diaries of Margaret Taylor in 1830, when the Taylors of Ardgillan Castle, outside Balbriggan, played the Palmers of Kenure Park, Rush. Other estate teams in Fingal were associated with the Talbots of Malahide Castle and the Cobbes of Newbridge House, Donabate, in a day when teams were made up from the families, staff and tenant farmers and their sons.

The Fingal Cricket League started in 1926, but Rush Cricket Club was not formally founded until 1931. It has played on its current ground since 1969, when the former Palmer Estate in Kenure was broken up because of heavy taxation in the 1960s.

The present grounds are humble in appearance, surrounded by concrete walls on three sides, and with 50-ft netting to prevent sixes flying over the short boundary into the houses along the fourth side.

On a summer afternoon like today, it may seem to the outsider that there is little remarkable about Rush Cricket Club, a Division Two team in the Leinster League. During the dark ages in Irish cricket in the 20th century, it was clubs like this that kept the flame alive. Cricket has stubbornly remained an important part of sporting life in North County Dublin.

But Rush has a unique role in the 2015 World Cup. It is a club that can claim to have developed two captains in the tournament. The new England captain, Eoin Morgan, grew up playing for Rush, his local club, and the Ireland skipper William Porterfield honed his game here in 2006/2007.

I could have lingered longer in Rush this afternoon … or in Skerries. Summer afternoons should be filled with more time for cricket and sailing.

As I left Rush this evening, I found myself recalling the words of this morning’s Offertory hymn ‘All my hope on God is founded’ by Robert Bridges (1844–1930), to the tune Michael by Herbert Howells (1892–1983):

Lord, you have taught us
that all our doings without love are nothing worth:
Send your Holy Spirit
and pour into our hearts that most excellent gift of love,
the true bond of peace and of all virtues,
without which whoever lives is counted dead before you.
Grant this for your only Son Jesus Christ’s sake.

Posted by Patrick Comerford at 20:54 No comments: 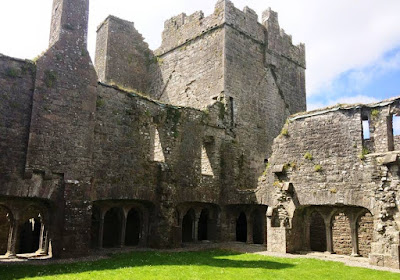 Bective Abbey, on the banks of the River Boyne … the second Cistercian foundation in Ireland (Photograph: Patrick Comerford, 2015)

The Station House Hotel in Kilmessan, Co Meath, provided a good base this weekend for exploring the Boyne Valley, and yesterday afternoon I spent an hour or so visiting the ruins of Bective Abbey (Mainistir Bheigthí), a Cistercian abbey on the banks of the River Boyne.

Bective Abbey was founded by the King of Meath, Murchad O Maeil-Sheachlainn, in 1147 as a daughter house of Mellifont Abbey, which had been founded just five years earlier. This was the second Cistercian foundation in Ireland and the new abbey was dedicated to the Blessed Virgin Mary.

Hugh de Lacy, the Anglo-Norman Lord of Meath who built Trim Castle, was murdered in Durrow in 1195. The Abbey of Saint Thomas in Dublin and Mellifont Abbey wanted his body to be buried with them. Finally it was decided to bury his body at Bective and his head in Dublin.

The decision caused feuding between the monks of the two abbeys, and ten years later in 1205 the Bishop of Meath and two other judges decreed that the head and body should be reunited and buried together in Dublin.

In 1228, Bective Abbey was fortified and used as a safe haven for the English and visitors from Europe. 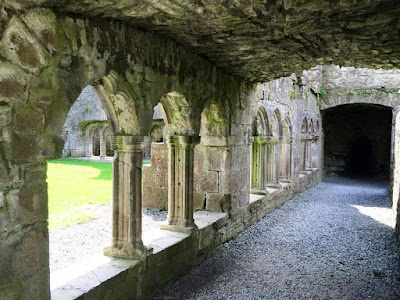 Bective Abbey was rebuilt and fortified in the 15th century (Photograph: Patrick Comerford, 2015)

The lands were first rented to Thomas Asgarde, an English civil servant, and was bought by Andrew Wyse in 1552. Bective then passed to the Dillon family and later to the Bolton family. The complex was converted into a great mansion with the insertion of new fireplaces, chimneys and large stone windows. However, the abbey and the great mansion later fell into ruin.

But the best preserved parts of the building are two surviving sections of the 15th century cloisters, with some beautiful arches that are still intact, including a pillar with the figure of mediaeval bishop or abbot carrying a crozier. Some sources say this is Saint Brendan, but it is difficult to understand why an old Irish saint would be given such prominence in an Anglo-Norman foundation. Perhaps he was the abbot responsible for building the cloisters. 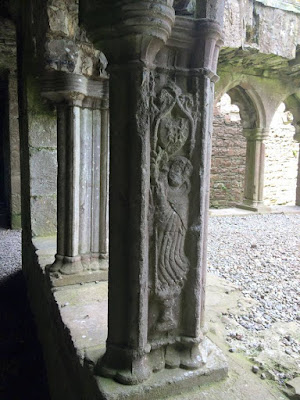 A carving in the 15th century cloisters … is this Saint Brendan or the abbot responsible for building the cloisters? (Photograph: Patrick Comerford, 2015)

Bective Abbey was used as a location during the filming of Mel Gibson movie Braveheart in 1995, and the cloisters were used for the scene with the Princess and her maid.

Today the ruins of the abbey are set in the middle of pasture on the banks of the River Boyne. In 2012, the Office of Public Works bought some of the land from the farmer and converted it into a carpark, laying out a footpath leading to the abbey. 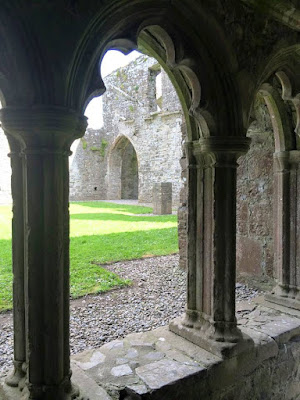 In the cloisters in Bective Abbey (Photograph: Patrick Comerford, 2015)