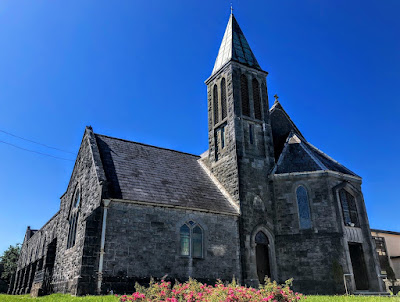 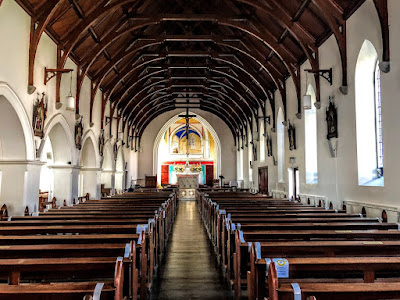 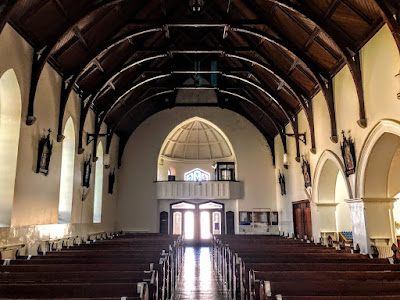 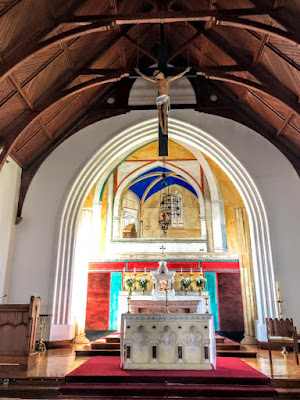 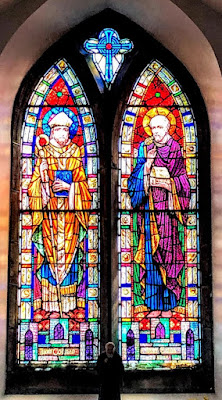 Praying in Ordinary Time 2021:
63, the Church of Panagia Deksia, Thessaloniki 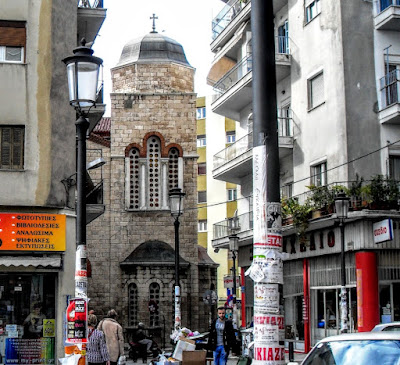 The Church of Panagia Deksia seen through the narrow streets near the Arch of Galerius and the Rotunda in Thessaloniki (Photograph: Patrick Comerford)

This week’s theme is seven churches in Thessaloniki, and to bring this theme to a close my photographs this morning (31 July 2021) are from the Church of Panagia Deksia, near the Arch of Galerius on Egnatia Street. 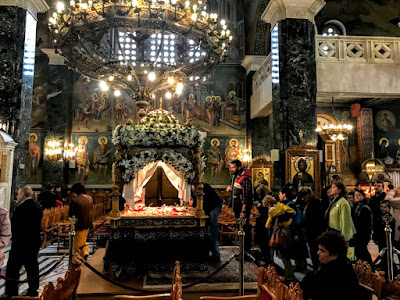 Inside the Church of Panagia Deksia on a recent Good Friday (Photograph: Patrick Comerford)

Thessaloniki is rich in Byzantine treasures, including churches, buildings, towers, walls and arches. Many of these have survived through the Turkish occupation, countless earthquakes and the Great Fire of 1917.

However, the Church of Panagia Deksia is one of the many newer churches in the city, and its relative newness is emphasised by the surrounding area, which is at the heart of the university life in the city.

Although not it is not as historic as the Byzantine churches that attract the attention of visitors and tourists, it has many colourful icons and frescoes, and local traditions and stories say one icon is miraculous.


The Church of Panagia Deksia, about 150 metres south of the Rotunda, was built 65 years ago in 1956 on the site of an older church, Saint Hypatia the Miracle Worker. Although this is a modern church, its style of architecture is mostly Byzantine, with some neo-classical embellishments such as arcades resting on columns and barrel vaults.

The name of the church is believed to come from an icon in the church connected with many myths and legends. The icon depicts the Virgin Mary holding the Christ Child on the right side rather than the traditional left, and so is called Deksia, Deksa or Dexiokratousa, right-handed or right side.

The interior of the dome depicts Christ the Pantocrator holding the New Testament in his left hand and blessing with his right hand.

One fresco depicts three women: Saint Irene, Saint Catherine and Saint Barbara. In icons and frescoes in Greek churches, saints are often found together in traditional groupings, such as the Apostles Peter and Paul, as an icon of Church Unity, Saint Paul and Sant Barnabas, the Cappadocian Fathers and the Three Holy Hierarchs.

Saint Irene is one of three saints and sisters, Irene, Agape and Chione, who were born in Thessaloniki and who were martyred there for their faith in the year 304 AD. Their feast day is on 3 April.

Saint Catharine of Alexandria was a daughter of Constus, Governor of Alexandria in the reign of the Emperor Maximian (286-305). A vision of the Virgin Mary and Christ Child had convinced her to become a Christian at the age of 14. When the persecutions began in the reign of Maxentius, she rebuked the emperor for his cruelty.

The furious emperor condemned Catherine to death on a spiked breaking wheel, but, at her touch, it shattered. Maxentius ordered her to be beheaded. Catherine herself ordered the execution to commence. A milk-like substance rather than blood flowed from her neck. Angels transported her body to Mount Saint Catherine, next to Mount Sinai, where Saint Catherine’s Monastery was founded by the Emperor Justinian in the sixth century.

Her popularity grew with the reported rediscovery of her body at Mount Sinai around the year 800. Her principal symbol is the spiked wheel, which has become known as the Catherine wheel. Her feast day is on 25 November.

Saint Barbara, whose Feast Day is 4 December, is known in the Orthodox Church as the Great Martyr Barbara. Accounts place her in the third century in the Greek city of Nicomedia in Anatolia, or in Heliopolis of Phoenicia, present-day Baalbek in Lebanon.

Her biographers say Saint Barbara was the daughter of Dioscorus, a rich man who guarded her from the outside world by keeping her locked in a tower. She secretly become a Christian and rejected a forced marriage arranged by her father. When she was condemned to death by beheading, her father carried out the death-sentence. But he was struck by lightning on the way home and his body was consumed by flame. It is said she was martyred on 4 December in the reign of emperor Maximianus and Prefect Marcien (286-305).

Alongside Saint Catherine of Alexandria, Saint Barbara is known as one of the ‘Fourteen Holy Helpers.’ The lightning that killed her father has caused her to be invoked against lightning and fire. She is also the patron of artillery and mining.

To outsiders, the Orthodox Church can sometimes be seen as behind the times in its attitude to women, exemplified in debates about the ordination of women or the exclusion of women from Mount Athos. But the exclusion of women from Mount Athos is more about protecting and honouring the celibacy of the men in the monastic communities, and I am confident that because the debate about the ordination of women is theological rather than misogynistic that it is capable of moving forward in time.

On the other hand, the Covid-19 pandemic and the consequent ‘lockdown’ has resulted in a reported rise in domestic violence in Ireland. Irish society today needs to root out misogyny and gender-based violence today, just as it set about rooting out racism and class discrimination and prejudice in the past.

The three women in this fresco – Saint Irene, Saint Catherine of Alexandria and Saint Barbara – emerged as strong figures in their own right. They continued to adhere to their principles and their insistence on the truth when they were betrayed and sexually mistreated by the men in their own family circles. They were brutalised and faced court cases in which their truthfulness and their self-worth were publicly doubted. Their public humiliation finally led to their deaths. Yet it was the men in their lives who were the real perpetrators of injustice, while the women retained their integrity and their own values, no matter what men said about them or projected onto them. 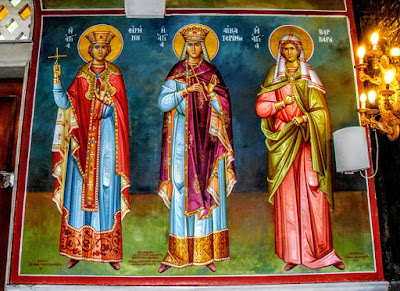 14 At that time Herod the ruler heard reports about Jesus; 2 and he said to his servants, ‘This is John the Baptist; he has been raised from the dead, and for this reason these powers are at work in him.’ 3 For Herod had arrested John, bound him, and put him in prison on account of Herodias, his brother Philip’s wife, 4 because John had been telling him, ‘It is not lawful for you to have her.’ 5 Though Herod wanted to put him to death, he feared the crowd, because they regarded him as a prophet. 6 But when Herod’s birthday came, the daughter of Herodias danced before the company, and she pleased Herod 7 so much that he promised on oath to grant her whatever she might ask. 8 Prompted by her mother, she said, ‘Give me the head of John the Baptist here on a platter.’ 9 The king was grieved, yet out of regard for his oaths and for the guests, he commanded it to be given; 10 he sent and had John beheaded in the prison. 11 The head was brought on a platter and given to the girl, who brought it to her mother. 12 His disciples came and took the body and buried it; then they went and told Jesus.

The Annunciation in a double fresco in the Church of Panagia Deksia (Photograph: Patrick Comerford)

The Prayer in the USPG Prayer Diary today (31 July 2021) recalls that today is International Friendship Day and invites us to pray:

Let us give thanks for friendship and the many forms it takes. May we remember all of our friends across the world church. 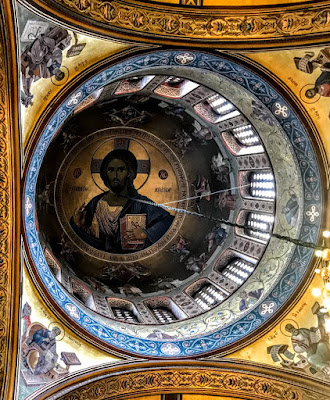 Christ the Pantocrator in the dome in the Church of Panagia Deksia (Photograph: Patrick Comerford) 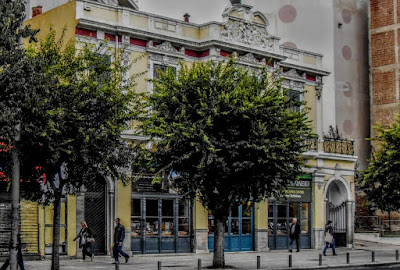 The offices of Mount Athos in Thessaloniki (Photograph: Patrick Comerford)