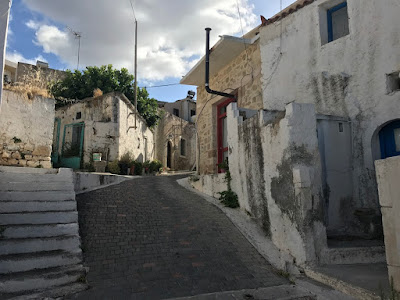 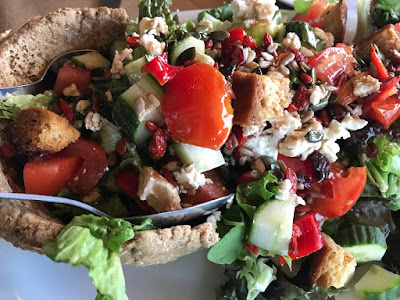 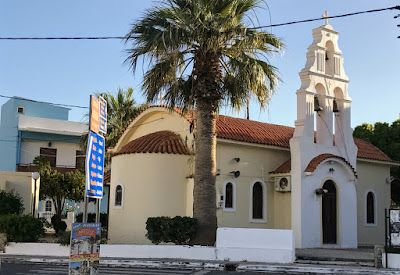 The Greeks have a word
for it: (7) thálassa, the sea 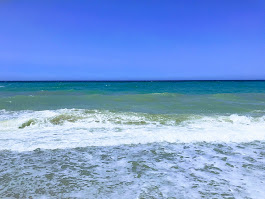 Blue skies and the blues of the sea at the beach in Platanes (Photograph: Patrikck Comerford, 2017)

I spent much of the afternoon yesterday [3 July 2017] on the beach at Platanes, a little east of Rethymnon, looking out at the sea in all its shades of blue. The red flag was up, and the sea was too choppy even for the silliest of people to venture in and try to swim. But I sat there for some time, enjoying the changing colours and shades of blue in sea and sky.

The Greek word θᾰ́λᾰσσᾰ (thálassa) refers to the sea, but can also refer specifically to the Mediterranean Sea.

Some common Greek words like thallasos for sea, and υάκινθος (hyákinthos) for hyacinth or bluebell, are survivors of early language that is now known to linguists as Eteocretan or Pelagian.

About half a dozen of these inscriptions have been found in eastern Crete. Although they are written in Greek alphabets, they are clearly not Greek. These inscriptions date from the late seventh or early sixth century down to the third century BC. The language, which is not understood, is probably a survival of a language spoken on Crete before the arrival of Greeks.

Was it derived from the Minoan language preserved in the Linear A inscriptions of a millennium earlier? Who knows? Since that language remains untranslated, we do not know whether Eteocretan and Minoan are related.

The term Eteocretan is sometimes used for the Minoan language or languages written more than a millennium earlier in so-called Cretan hieroglyphics and in the Linear A script.
.
When Odysseus returns home, he pretends to be a grandson of Minos, and tells his wife Penelope about his alleged homeland of Crete:

There is a land called Crete in the midst of the wine-blue sea,
a beautiful and fertile land, seagirt; in it are many
people, innumerable, and there are ninety cities.
Language with language is mingled together. There are Akhaians,
there are great-hearted Eteocretans, there are Kydones,
and Dorians in their three clans, and noble Pelasgians.

The wine-dark sea, or even the wine-red is often the traditional English translation of οἶνοψ πόντος (oinops pontos). A literal translation might be the ‘wine-face sea.’ The only other use of the word οἶνοψ (oinops) in the works of Homer is for oxen, where it seems to describe a reddish colour, which has given rise to various speculations about what it could mean about the blue seas.

The terms for blue and green have changed completely in the transition from ancient Greek to modern Greek. Ancient Greek had γλαυκός (glafkós) for clear light blue, contrasting with χλωρός (chlorós) for bright green. Kυανός, which became cyan in English, means either a dark blue substance or just blue. Modern Greek has πράσινο (prásino) for green and γαλάζιο (galázio) or θαλασσί (thalassí, sea coloured) for light blue or sea blue. The recent loan μπλε (ble, French bleu) is also used for blue.

In Modern Greek, there are additional names for light and dark blues and greens:

As a rule, the first two words of the list are accepted as shades of blue, and the rest as shades of green. Also there is βιολέ (violé) or βιολετί (violetí) for violet blue, which in Greece is, however, usually considered as a shade of purple, rather than blue.

Sitting under the blue skies and watching the blue waters of Crete yesterday afternoon it was interesting to muse that a language that today has at least four words for blue has to borrow from English the words for grey (γκρί) and brown (καφέ) brown. 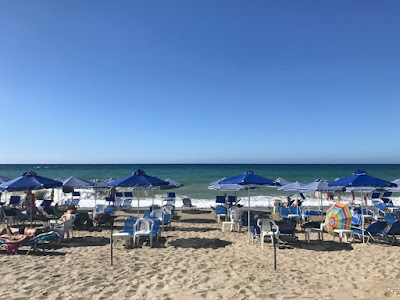 A sea of blue by the beach in Platanes near Rethymnon (Photograph: Patrick Comerford, 2017)