Bread, in all its shapes and sizes,
remains the staff of life in Greece 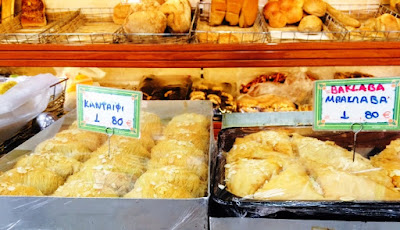 Do you know your baklava from your kataifi? (Photograph: Patrick Comerford, 2015)

Do you know your baklava from your kataifi?

One of the benefits of staying in Julia Apartments in Platanes, outside Rethymnon, this week is that there is a fine traditional Greek bakery or fournos downstairs at the corner, just beside the taverna.

I was there first thing this morning to buy bread for breakfast, and was taken away by the variety of breads, pastries, pies and cakes that have been available since dawn.

Of course, Greeks eat bread (psomi) at every meal, and for them it literally is the sustenance of life, as well as having religious significance. There is a special bread for every feast in the Church calendar – name days, fasting days, days of remembrance, feast days, and holy days including Christopsomo for Christmas and a Tsoureki for Easter.

Bread comes in all shapes and sizes, but none of these is random. Each shape and size has a significance associated with a different meal, a different day or a different celebration. So, for example, Christopsomo will either be in the shape of a cross or have a cross marked on top. Tsoureki is made of three strands braided together to represent the Holy Trinity. Other shapes include star shaped bread, circular ring shapes and knotted bread. 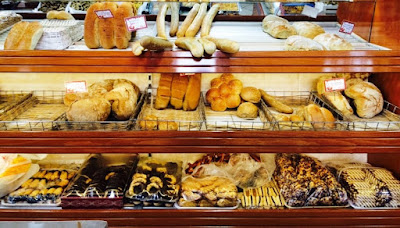 Bread in a variety of shapes and sizes in my local bakery this morning (Photograph: Patrick Comerford, 2015)

As for sweet treats, baklava and kataifi are among the most popular and delicious Greek desserts.

Baklava (μπακλαβάς) is a rich, sweet pastry made of layers of filo, filled with chopped nuts and sweetened and held together with syrup or honey. It is found through the lands of the former Ottoman Empire, including Greece, Turkey, Syria, and as far away as Central and South-West Asia.

The word baklava is first found in English in 1650, but the name sounds the same in the different languages of the Mediterranean and Middle East. Greeks and the Turks still argue over which dishes are originally Greek and which are Turkish.

Different scholars find the origins of the word in different languages, including Turkish, Arabic Persian and even Mongolian, and trace its story back to Roman placenta cake, Byzantine cuisine, or the Persian lauzinaq.

There are similarities between baklava and the Ancient Greek desserts gastris (γάστρις), kopte sesamis (κοπτὴ σησαμίς), and kopton (κοπτόν). But the current form of baklava may have been developed in the imperial kitchens of the Topkapı Palace in Istanbul, where the Sultan is said to have presented trays of baklava to the Janissaries on 15th day Ramadan each year in a ceremony known as the Baklava Alayı.

In Greece, baklava is supposed to be made with 33 dough layers, referring to the years of Christ’s life.

Kataifi (κανταΐφι or καταΐφι) was once described to me by an Irish tourist in Greece as “shredded wheat with honey.” It is made with a special type of pastry called kataifi or kadaifi. The pastry is like angel hair pasta and when rolled up resembles shredded wheat. A delectable nutty centre is rolled inside crisp, thread-like strands of pastry, baked, then soaked in a sweet syrup.

Like many Greek dessert recipes, a sweet syrup is poured over the cooked sweets, which keeps them from drying out.

This too is found in Turkey and other Mediterranean Middle East countries. Some traditional Greek recipes use only almonds, others use a mixture of almonds and walnuts, or even pistachios.

Last night, after dinner, I also enjoyed tiropita or tyropita, a Greek layered pastry pie of a feta cheese filling, and dressed with honey and cinnamon.

Greek cuisine is rich and with many variations, and has improved over the decades since I started coming here.

But bread remains the staff of life, in all its varieties, shapes, sizes and colours. 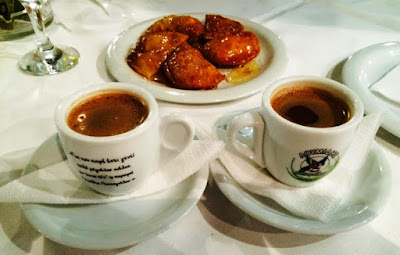 Posted by Patrick Comerford at 15:10 No comments: