The Armenian cross in the grounds of Christ Church Cathedral, Dublin, remembers the people who died in the Armenian Genocide (Photograph: Patrick Comerford, 2016)

Between the Choral Eucharist in Christ Church Cathedral, Dublin, on Sunday morning, and the ordination of two new priests on Sunday afternoon [25 September 2016], I took time to look at the memorial cross in the cathedral grounds that was dedicated late last year as a memorial to people who died in the Armenian Genocide or ‘Mez Yeghern’ that began in 1915.

The traditional Khachkar or stone cross memorial, close to the south porch of the cathedral, was dedicated last December by the Primate of the Armenian Apostolic Church of UK and Ireland, Bishop Hovakin Manukyan. He was joined by the Church of Ireland and Roman Catholic Archbishops of Dublin, Archbishop Michael Jackson and Archbishop Diarmuid Martin, the President of the Methodist Church in Ireland, the Revd Brian Anderson, and Father Godfrey O’Donnell of the Romanian Orthodox Church.

The Khachkar is part of the Armenian Christian identity and these crosses are generally carved from volcanic stone. The one that now stands in the grounds of Christ Church Cathedral was designed by Aram Hakhumvan, who lives in Ireland, and was carved in Armenia by Arta Hambardzumvan. It features a Celtic Cross with an Armenian Cross standing out of it and the rest of the stone has many Irish and Armenian details, including shamrocks and grapes.

The Dublin Khachkar is the 167th memorial in 52 countries around the world to mark the Armenian genocide. The inscription reads: ‘In memory of the victims of the Armenian Genocide.’

The scriptural text on the cross reads:

Yet this I call to mind and
therefore I have hope:
because of the Lord’s
great love we are not consumed,
for his compassions never fail.
They are new every morning;
great is your faithfulness.

Details on the Khachkar Cross in the grounds of Christ Church Cathedral (Photograph: Patrick Comerford, 2016)

The top of the frieze of the Khachkar is decorated with a fragment of design from a mediaeval cemetery as a reminder of the recent destruction of Armenian cemeteries and churches in Syria, Iraq and other parts of the Middle East.

The dedication of the cross marked the centenary of the beginning of the Armenian Genocide. At the time , the Dean of Christ Church, the Very Revd Dermot Dunne, explained why the cathedral was chosen: ‘Christ Church Cathedral lies at the spiritual heart of Dublin. It is the mother church of the Dioceses of Dublin and Glendalough. The Armenian Church and community are very close to the dioceses and it felt fitting that the Khachkar should be located here both as a memorial to the victims of the genocide and as a visible sign of the link between our two Churches.’

Armenia claims that in 301 it became the first country to have adopt Christianity as its official religion. Throughout the centuries, Armenia has been invaded by successive imperial powers, and this has made the Armenians fierce protectors of their culture, their language, their traditions, their autonomy and their expression of Christianity.

After the wars between the Russian and Persian Empires in 1826, the parts of Armenia under Persian rule passed to the Tsarist empire, while other Armenians found themselves living under Ottoman rule.

Armenians in the Turkish Empire tended to be better educated and wealthier than their Turkish neighbours, but had few political and legal rights. Within a couple of months in 1915-1916, a massive population vanished, with overwhelming numbers deported and murdered.

The project that led this cross being erected in the grounds of Christ Church Cayhedral was inspired by a lecture given by the late Dr Hilary Richardson, the archaeologist and anthropologist who died almost a year ago [7 November 2015]. She was a parishioner of Saint Bartholomew’s, Ballsbridge, and many of her books and journal collections in the fields of Patristics, Byzantine studies and church history have been shared generously with me by her family.

She had studied archaeology and anthropology at Cambridge, and the History of Art at University College Dublin, and was was a lecturer at the Department of Archaeology in UCD. In 1985, she was the first recipient of an exchange fellowship sponsored by the Royal Irish Academy and the USSR Academy of Sciences, which allowed her to continue her studies in Armenia and Georgia.

She died at the age of 85 only weeks before the Khachkar was dedicated, and her funeral was attended by representatives of the Armenian community in Dublin. 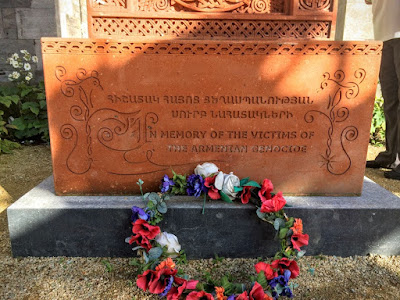 The dedication on the Dublin Khachkar (Photograph: Patrick Comerford, 2016)