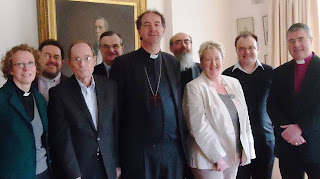 The following photograph and news report are published in the Church of Ireland Gazette in today’s edition [15 February 2013]:

Bishop Michael Burrows (front row, centre) recently hosted official Church of Ireland - Moravian Church talks at the Bishop’s House, Kilkenny, and is pictured with the other participants in the dialogue (from left) Canon Helene Steed, the Revd Paul Holdsworth, Bishop Graham Rights, Canon Ian Ellis, Canon Patrick Comerford, the Revd Sarah Groves, the Revd Philip Cooper and Bishop John McDowell. The Standing Committee of General Synod had authorised participation in the bilateral talks to explore the possibilities of a closer relationship between the Church of Ireland and the Moravian Church in Britain and Ireland, basis of the Moravian-US Episcopal Church agreement, Finding our delight in the Lord, which had been the basis of full communion between the two Churches. Bishop Rights (Moravian) had travelled from North Kilkenny for the two-day meeting in Kilkenny. Following the meeting, Bishop Burrows described it as having ben “a warm, thorough and fruitful examination of the issues facing our Churches if a relationship of full communion is to be achieved between.”

Posted by Patrick Comerford at 20:30 No comments:

The new Archbishop of Canterbury, Dr Justin Welby, has strong family links to Ireland, with ancestral roots that trace him back to Lord Edward Fitzgerald, the British aristocrat and revolutionary and one of the leaders of the 1798 rebellion against British rule in Ireland, according to recent research by the eminent Church of Ireland Historian, Canon Patrick Comerford, published in the February edition of The Church Review, Dublin and Glendalough’s monthly diocesan magazine.

Canon Comerford lectures on Liturgy and Church History in the Church of Ireland Theological Institute and is an Adjunct Visiting Professor at Trinity College Dublin.

Canon Comerford’s investigations revealed the new archbishop’s strong Irish roots through his mother’s descent from a well-known Co. Kildare family whose ancestral home was Celbridge House, now known as Oakley Park and part of a special needs school run by the St John of God order.

“I knew Archbishop Welby and his mother, Jane Gillian Portal, were related to the former Tory politician, R.A.B. Butler,” Canon Comerford told the editor of The Church Review, the Revd Nigel Waugh. “However, when I traced Butler’s ancestors, I was surprised to find that they had no verifiable connections with the Butler families of Ireland.”

Canon Comerford then went in search of Irish ancestors among the Portal family, ancestors of Archbishop Welby’s mother, Lady Williams.

“I found that the archbishop’s maternal grandmother was Rose Leslie Napier,” Canon Comerford explained, “and then I realised that there had to be a strong Irish connection.

“I was familiar with the story of Sir Charles James Napier, an Irish general who was Governor of Kephalonia and who played a role in the Greek War of Independence. He was a first cousin of the 1798 leader Lord Edward FitzGerald and I wondered whether Rose was descended from the same family.”

After Christmas, Canon Comerford visited Celbridge, Co. Kildare, and his subsequent research confirmed, he says, “that Archbishop Welby is a direct descendant of Lady Sarah (Napier) Lennox, a sister of both Lady Emily Lennox, Duchess of Leinster and mother of Lord Edward FitzGerald and Lady Louisa Lennox, wife of Thomas Conolly of Castletown House, Co Kildare.” 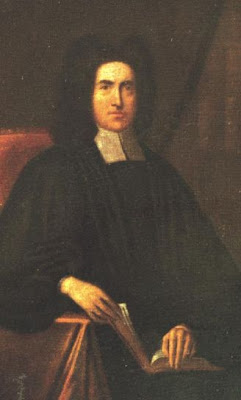 The Revd Dr Thomas Bray (1658-1730), an Anglican priest who spent time in Maryland as a missionary, was the founder of both the Society for the Propagation of the Gospel (SPG, now the United Society or Us) and the Society for Promoting Christian Knowledge (SPCK). He is commemorated on this date [15 February] in several Churches in the Anglican Communion, including the Church of England and the Episcopal Church.

The local bishop took notice of young Thomas and felt that with his bright mind he should receive a good education. The bishop sponsored him and paid for his education. Thomas Bray He was educated at Oswestry School, matriculated at All Souls’ College, Oxford, as a “poor boy” on 12 March 1675, and graduated BA in 1678. He later received the degrees MA at Hart Hall (now Hertford College) in 1693, and BD and DD at Magdalene College, Oxford, in 1696.

Thomas Bray was ordained priest in 1682, and he was curate at Bridgnorth before becoming a private chaplain and then Vicar of Over Whitacre and from 1690-1695 Rector of Saint Giles, Sheldon, in Warwickshire, in the Diocese of Lichfield. There he wrote his Catechetical Lectures, which was dedicated to William Lloyd, Bishop of Lichfield. While he was in Warwickshire, he married is first wife, Eleanor.

He appears to have been widowed by 1695, when the Bishop of London, Henry Compton, appointed him as his commissary to organise the struggling Anglican presence in the colony of Maryland.

But his visit to Maryland was long delayed by legal complications, and during that delay, the widowed Thomas Bray married Agnes Sayers of Saint Martin’s-in-the-Fields in Lincoln’s Inn Chapel, Holborn in 1698.

Thomas Bray eventually set sail for America in 1699 for his first and only visit. Although he spent only ten weeks in Maryland, Bray was deeply concerned about the neglected state of the Church in America and the great need for the education of the clergy, the laity people and children.

At a general visitation of the clergy in Annapolis before his return to England, he emphasised the need for the instruction of children and insisted that no clergyman be given a charge unless he had a good report from the ship he came over in, “whether … he gave no matter of scandal, and whether he did constantly read prayers twice a day and catechise and preach on Sundays, which, notwithstanding the common excuses, I know can be done by a minister of any zeal for religion.”

Back in England, he raised money for missionary work and influenced young Anglican priests to go to America. But his efforts to secure the consecration of a bishop for America were unsuccessful.

In England, he also wrote and preached in defence of the rights of enslaved Africans, and of Indians deprived of their land. He also worked for the reform of prison conditions, and for the establishment of preaching missions to prisoners. He persuaded General James Oglethorpe to found a colony in Georgia for the settlement of debtors as an alternative to debtors’ prison.

In response to his experiences, Thomas Bray was instrumental in establishing both SPCK in 1699 and SPG in 1701.

From 1706 until his death in 1730 he was Vicar of Saint Botolph Without, Aldgate, London, where he continued his philanthropic and literary pursuits. He served the parish with energy and devotion, while continuing his efforts on behalf of African slaves in America and in founding parish libraries.

Thomas Bray’s most widely circulated work is his four-volume A Course of Lectures upon the Church Catechism, published in 1696.

O God of compassion, who opened the eyes of your servant Thomas Bray to see the needs of the Church in the New World, and led him to found societies to meet those needs: Make the Church in this land diligent at all times to propagate the Gospel among those who have not received it, and to promote the spread of Christian knowledge; through Jesus Christ our Lord, who lives and reigns with you and the Holy Spirit, one God, for ever and ever.

Canon Patrick Comerford is Lecturer in Anglicanism and Liturgy, the Church of Ireland Theological Institute, and an Adjunct Assistant Professor, the University of Dublin (Trinity College Dublin).