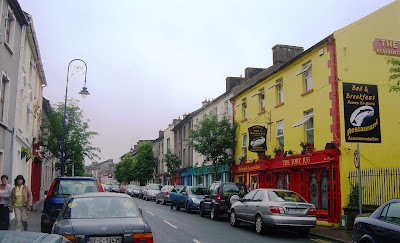 The Cappoquin Thomas McCarthy recalls in his poetry is the Cappoquin I too loved in my childhood (Photograph: Patrick Comerford)

I remember how, as a child, Saint Patrick’s Day on 17 March came as a break in Lent. Not only was this my name-day, which always had a feeling of being a second birthday, but it was also a day when adults and children alike put aside their Lenten fasts, abstinences and discipline.

Many of my childhood memories come back to me when I read the poems of Thomas McCarthy. And so, this morning, in my choice of a Poem for Lent, I have selected ‘St Patrick’s Day with Neil,’ by Thomas McCarthy.

Thomas McCarthy was born in Cappoquin, Co Waterford, in 1954. And the Cappoquin he recalls in his poetry is the small town I remember when I was on my grandmother’s farm at Moonwee, a miles outside in the 1950s and 1960s: the Glenshelane woodland walk; the boathouse – used for dances and plays as well as rowing; summer cricket; the railway station that closed in 1967; and the Desmond Cinema, which closed in 2005. 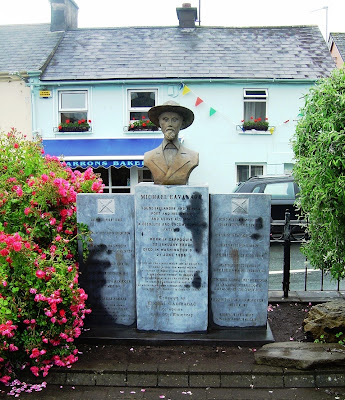 I grew up thinking of Cappoquin as a town of poets … a monument to Michael Cavanagh in The Square (Photograph: Patrick Comerford)

I grew up thinking of Cappoquin as a town of poets. This was the birth place of Michael Cavanagh (1822-1900), whose Fenian activities, including an attack on the barracks (the site of Walsh’s Hotel) in Cappoquin in 1849, forced him to emigrate to America. The poet John Walsh was born in 1835 at Belleville Park, Cappoquin, where his father was a steward – later the house was home for many years to the writer Molly Keane. Bishop Frederick MacNeice, the father of the poet Louis MacNeice, began his clerical life as the Church of Ireland curate in Cappoquin.

From Saint Anne’s School in Cappoquin, Thomas McCarthy went on to University College Cork, where he was part of a resurgence of literary activity inspired by John Montague. His contemporaries there included Theo Dorgan, the late Sean Dunne, Greg Delanty, Maurice Riordan and Bill Wall.

He began to publish poems while he was still an undergraduate and won awards at an early age, including the Patrick Kavanagh Award in 1977 when he was just 23. Since then, eight collections of his poetry have been published by Anvil Press: The First Convention, The Sorrow Garden, The Non-Aligned Storyteller, Seven Winters in Paris, The Lost Province, Mr Dineen’s Careful Parade (which includes today’s poem), The Last Geraldine Officer and Merchant Prince. He has also written a prose memoir, Gardens of Remembrance, and two novels, Without Power and Asya and Christine, as well as editing The Cork Review and Poetry Ireland Review.

He is married with two children and has spent most of his working life as a librarian in Cork City, with occasional teaching sabbaticals in the US, including a year at Manchester College, Minnesota, which is recalled in today’s poem. 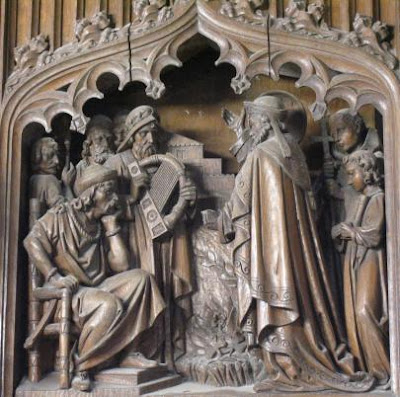 Saint Patrick preaching at Tara to King Laoghaire and his chiefs on Easter Day, 433AD … a panel on the Comerford pulpit from Carlow Cathedral

We start this day in an embarrassment of March,
St Patrick’s Day. My wide-awake displeasure
is not of interest to you. After a year
in the US you think Bill Clinton is Taoiseach.
You still hope for the yellow truck from Schwans.
What is your nation? It’s still unclear.
Are you from Cork or the Minnesota Twins?
Don’t decide, not on this day of green beer

and things gone haywire for the umpteenth time.
You lie in our bed for comfort and praise,
the fresh weave of a blanket on your delicate face.
St Patrick’s Day in bed with the radio on.
Their public façade, their cupla focail. Your turtle-
head clears the eiderdown. You wait for the storm
of rain that always comes; then leave the place
of refuge abruptly. We’re the rejected Church

and watch you leap across the shaggy room.
St Patrick’s Day begins in kilts of heavy rain.
You were first to hear the pluralist hailstorm
and the noise of life beyond the eiderdown.
And there you speed, hero of daylight,
head forward into the day’s Fontenoy:
the battle is yours, brilliant, irredentist boy.
No panel on the radio could get this right –

how one small boy in his native country
(Prince William at Eton, Sheridan Lowell in Mass.)
can define completely his parents’ place.
I rise and follow you to better see
what you make of the drenched and native earth:
only to find you before me at the kitchen door
laughing with the daft warmth of a Celt,
your plastic beaker held aloft in the downpour.

This day you carry with an air of confidence.
I know it’s because you’ve something hoarded,
a cup full of hailstones in a freezer,
salted away like a trust fund offshore.
I watch you, bare-headed in a teeshirt,
holding the blue beaker to a bountiful sky.
The grey hail of St Patrick’s Day
bounces like nuts of wisdom on your head.

The freezer, then, has a kind of inner knowledge
that you have rights over. I can understand
from my own boyhood the strength of a hoard.
I hid coins and copies of the Hotspur
from enemies of boys. My hoard was concealed.
The loose brick in Nanna’s wall had a Swiss number.
But I never had the audacity to hide, like you,
the mysteries of weather, a hoard of hail.