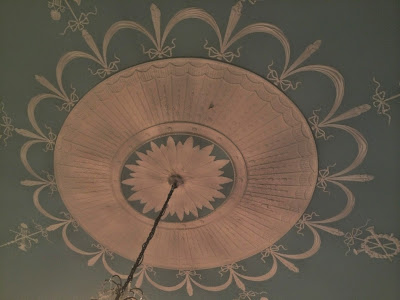 AS November draws to a close, and Advent begins tomorrow morning [30 November 2014], the evenings seem shorter and dusk falls earlier and earlier each day.

Before I knew it, it was late afternoon today, with just an hour or so of daylight left in the day, two of headed across to Marlay Park in Rathfarnham, thinking we would get a good coffee in the courtyard, and stroll through the stalls at the Farmers’ Market before darkness fell.

I had forgotten that the Marlay Craft Fair was on all this weekend, from Friday to Sunday [28 to 30 November], and we were about to change our mind and keep going on to Bray when we surprised upon a parking space.

From the car park to the courtyard, the pathway was lined with an array of craft stalls and charity tents. But we dallied only a little, for the stalls were beginning to close in courtyard, and I really needed that double espresso.

The Farmers’ Market in the courtyard at Marlay Park hosts a wealth of local producers each Saturday from 10am-4pm and Sunday from 11am-4pm. There is a broad range of artisan produce, including specialty foods.

Spruced up by two double espressos, we ended up buying a rich variety of olives, a tub of pesto-flavoured humous, fresh bread baked with dates and walnuts, and a raspberry and custard pie. 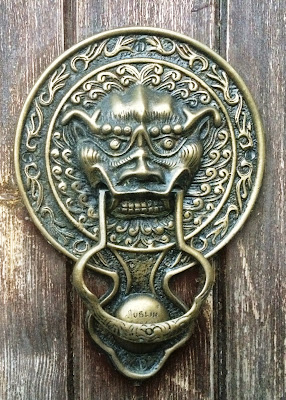 ‘Is there anyone at home?’ … a door knocker in the courtyard in Marlay Park (Photograph: Patrick Comerford, 2014)

For some years, the courtyard at Marlay has been home to a number of small craft industries and workshops, including weaving, glass cutting, bookbinding, furniture restoration, copper craft, pottery and embroidery. One of the original artists in residence was Evie Hone, whose stained-glass workshop was located in the library of Marlay House itself.

The courtyard is now being restored, and Dun Laoghaire Rathdown Council hopes to have new tenants in 20 new units by the middle of 2015. 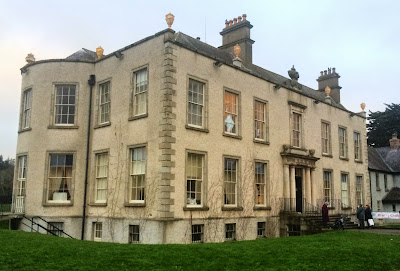 As darkness closed in and the stalls began to fold up in the courtyard this afternoon, we realised the Craft Stalls lining the pathway were just an overflow from the venue in the house itself, and this provided an opportunity to see a fine architectural gem lit up and its best.
The stucco decoration by Michael Stapleton in the Georgian house built by the La Touche family in Marlay Park (Photograph: Patrick Comerford, 2014)

The house built by the La Touche family at Marlay Park is a fine example of Georgian architecture, with many of the original elaborate features still intact, including the decorative plasterwork by the master stuccodore Michael Stapleton (1747-1801).

The crafts on the stall inside the house, all the crafts were made in Ireland by creative crafts people and small craft businesses, all delighted of the chance to sell their wares in such fine Georgian surroundings.

The Marlay Craft Fair continues tomorrow [Sunday, 30 November 2014], from 10 am to 5 pm. But I plan to be in Christ Church Cathedral for most of the day, marking the beginning of Advent, with the Cathedral Eucharist and the Advent Procession. 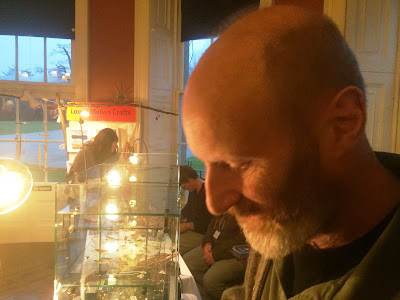 Posted by Patrick Comerford at 21:26 No comments: