Ramadan Iftar at the Moroccan Embassy 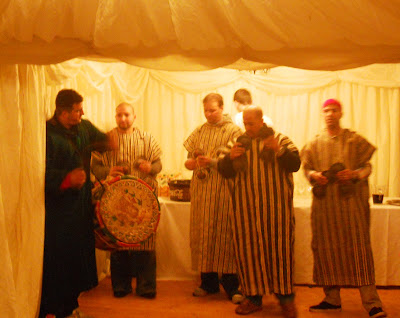 I was invited to the Moroccan Ambassador’s Residence in Dublin last night for Ramadan Iftar to mark the Moroccan National Day.

Large batches of sweets such as sellou and chebekiaare are traditionally prepared in advance for use throughout the month.

Eid Al Ârch or Fête du Trône (Throne Day) on 30 July is an annual celebration marking the accession to the Moroccan throne of Mohammed VI in 1999. The Moroccan royal family is descended from the Alaouite Dynasty, founded by Moulay Ali Cherif, who became Sultan of Tafilat in 1631.

Sidi Muhammad Ben Yusuf, who was Sultan of Morocco from 1927 to 1953, became a focal point of nationalist aspirations when Morocco gained independence from France and he then ruled as king from 1957 to 1961.

At last night’s reception, which began at sunset, there was plenty of traditional Moroccan iftar food. The guests included diplomats, judges, politicians, academics, charity and aid workers, and both members of the Muslim community and church leaders – a healthy and practical exercise in Christian-Muslim dialogue.

And before the evening ended, we were entertained by traditional Moroccan drummers.