A book launch with Colm Tóibín in Enniscorthy 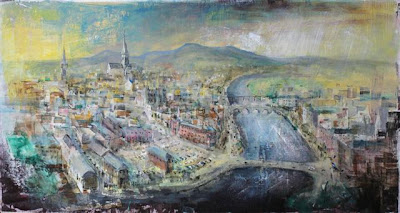 Peter Pearson’s Enniscorthy 1500, which illustrates the cover and endpapers of the new book, is also available in a limited print edition for €65

I was in Enniscorthy last night for the launch of a new book, A History of Enniscorthy, edited by the acclaimed author Colm Tóibín. I first got to know Colm when I was living in Wexford and he was living in Enniscorthy. He was a student at Saint Peter’s College, Wexford, and later at UCD, and hitched-hiked to some of the early poetry readings I organised in both Wexford and Gorey in the early and mid-1970s.

After returning to Ireland from Spain in 1978, Colm worked as a journalist in Dublin, and from 1982 to 1985 he was the editor of Magill. But he has always been loyal to his Wexford roots, and his “Wexford” novels, The Heather Blazing and the The Blackwater Lightship, use his native Enniscorthty and Co Wexford as narrative material. Last year he published Brooklyn, which tells the story of a woman who emigrates from Enniscorthy to Brooklyn – the book was listed for the Booker Prize and was awarded the 2010 Costa Prize.

He now teaches at Princecton, but last night, Colm was back in Enniscorthy for the launch of A History of Enniscorthy, which he has edited and which is published by Wexford County Council Public Library Service as part of the celebrations marking the 1,500th anniversary of Enniscorthy Town.

The illustration on the cover and endpapers is Peter Pearson’s Enniscorthy 1500, which is also available in a limited print edition for €65. The print is a memento of this year’s 1500 celebrations – 250 signed copies are available for sale from Enniscorthy Library, Wexford Library and Enniscorthy Town Council’s offices in Market Square, at €65 for individuals and €100 for institutions. 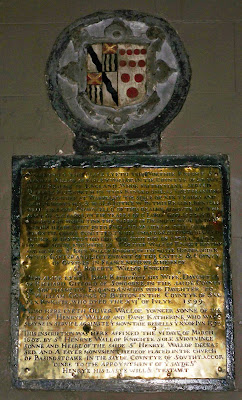 My contributions to this book (pp 122-123) are a photograph and a description of Sir Henry Wallop’s monument in Saint Patrick’s Cathedral, Dublin. Wallop bought Enniscorthy Castle, manor and friary lands in 1586, and they became the principal Irish estates of his descendants, the Earls of Portsmouth.

Enniscorthy’s Town Clerk, Padraig O’Gorman, was the MC for the evening. The Wexford County Manager, Eddie Breen, spoke of his pride in reading the contributions made to the work by Enniscorthy and Co Wexford historians. Colm Tóibín emphasised the way modern history has reclaimed the stories of the ordinary men and women from the past, and spoke too of how this book celebrates the institutions and individuals who created the society of today. 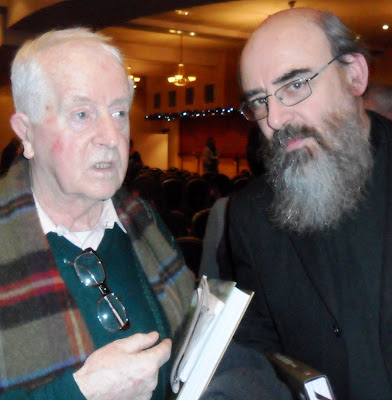 Many of the authors and photographers were at last night’s launch, and it was good to meet Colm and Celestine again and to spend time with some old friends and colleagues, including historian Nicholas Furlong (we once worked together on the Wexford People and the Enniscorthy Guardian), Billy Colfer, Seán Whelan of the Enniscorthy Echo, Pat O’Connor of the Wexford People, Bernard Browne, Father Richard Lawless of Saint Aidan’s Cathedral, Enniscorthy (Pugin’s great Irish gem), and my cousin Father Bernard Cushen of Adamstown.

As I was leaving, Michael Freeman from Galbally was still recalling those poetry readings and many late-night debates in School Street and High Street, Wexford, in the mid-1970s about the theologies of Teilhard de Chardin and John Robinson.

Posted by Patrick Comerford at 17:08 No comments: