Does Winnie the Pooh also suffer
from Vitamin B12 deficiency? 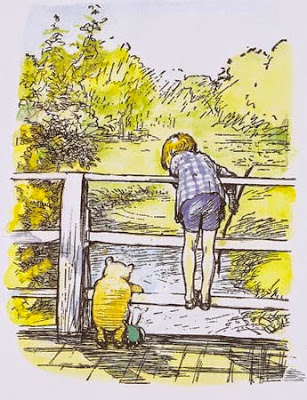 Winnie the Pooh ... suffering from the symptoms of Vitamin B12 deficiency?

One of my favourite television programmes is the BBC’s Have I Got News For You? It makes a cutting connection between humour and current affairs and each week provides some of the sharpest observations of political life in Britain.

Flaking out last night in front of the television after a long and demanding day at the General Synod of the Church of Ireland, humour and reality came to the fore when the panellists’ attention was brought to a recent news story about students who are asking questions like:

● Does Winnie the Pooh have a B12 deficiency?

● How many lies could Pinocchio tell before it became lethal?

● Is it really possible to enter a room on a wrecking ball, Miley Cyrus-style?

Third-year natural science undergraduates at the University of Leicester have wrestled with these bizarre dilemmas and more as part of a project on submitting research to peer-reviewed science journals.

For example, one question asked: How many lies could Pinocchio tell before it became lethal?

The answer was that Pinocchio could only sustain 13 lies in a row before the maximum upward force his neck could exert could no longer sustain his head and nose. The head’s overall centre of mass shifts over 85 metres after 13 lies, and the overall length of the nose is 208 metres.

The researchers concluded: “Lengthy, extensive lies are advised against, for the health and well-being of Pinocchio.”

But personally I was more interested in the work of the students who observed characteristics in Winnie the Pooh that appear to correlate with a B12 deficiency. They point out: “Such a condition is common in those with restricted diets, such as vegetarians and vegans, coinciding with anaemia where the patient is often tried, easily fatigued and shows a paling of the skin.”

I was particularly interested in this topic, which sounds humorous but is a serious one for me as I suffer from Vitamin B12 deficiency and require monthly B12 injections.

I was diagnosed with this condition almost six years ago, brought about by being a vegetarian for over 40 years, since my late teens. The combination of the symptoms of Vitamin B12 deficiency and the symptoms of sarcoidosis can be particularly debilitating at times, and I love with constant lower joint pains and persistent, painful tingling under my feet and at the tips of my fingers. 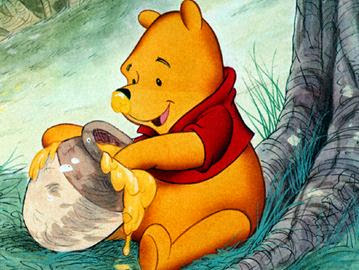 Winnie the Pooh ... students at the University of Leicester are asking whether he has a B12 Deficiency

With great humour but some sharp insight, they say decades of research studying the unique behaviour of Winnie the Pooh has provided a strong indication that a honey-specific diet could be causing a vitamin deficiency.

They say that in 1958 a bear was first observed in the Hundred Acre Wood displaying anthropomorphic characteristics, including a preferred attire of a red T-shirt and “significant bipedalism,” which, over a number decades, has grown as a household name as Winnie the Pooh, or simply Pooh Bear, both for its ambiguous evolutionary origin and charming personality.

Despite his joyous demeanour, they say, physiological changes have been noted throughout its lifetime, likely linked to a honey-specific diet. “This has given rise to concern that vitamin deficiencies, particularly in B12, are now putting his health at risk.”

They say that his symptoms have been identified throughout an extensive period of observation from 1988 to 2002. They acknowledge data from “Walt Disney and his research group” and “Alan Alexander Milne for his pioneering work in first discovering this unique species of Ursidae.”

AA Milne tells the stories about the adventures of Christopher Robin and the toy animals Pooh, Piglet, Kanga, Roo, Tigger, Rabbit, Owl, and Eeyore in his enduringly popular Winnie-the-Pooh (1926) and The House at Pooh Corner (1928). They were illustrated by Ernest Howard Shepard, who also illustrated The Wind in the Willows by Kenneth Grahame.

The symptoms the students have identified in Pooh Bear that infer potential health problems include a characteristic yellowing of the skin. They found this by comparing initial photographs of the animal and those taken at a later date. They also observed a “restricted gait” which “can be seen to show limited lower joint movement.”

They say the symptoms they have observed in Winnie the Pooh appear to correlate with a B12 deficiency and that this condition “is common in those with restricted diets, such as vegetarians and vegans, coinciding with anaemia where the patient is often tried, easily fatigued and shows a paling of the skin.”

But, despite the obvious good humour these undergraduates show, Vitamin B12 deficiency is no laughing matter. Typically, the first sign is anaemia, which can lead to a host of symptoms, such as diarrhoea, fatigue, loss of appetite, pale skin, problems in concentrating, shortness of breath, and a swollen or red tongue or bleeding gums.

Over time, should vitamin B12 levels get really bad, other cells are interfered with, such as nerves and white blood cells – a key part of the human immunity system. Signs of this are dementia, depression, loss of balance, numbness and tingling of the hands and feet.

Research has shown vitamin B12 deficiency can lead to anaemia and hypotension. Some studies have even shown that those diagnosed with Alzheimer’s disease have been found to have severely low levels of vitamin B12.

B12, or Cobalamin, is the largest and most complex vitamin we know currently. It plays a key role in the normal functioning of the brain and nervous system. B12 can only be manufactured by bacteria and can only be found naturally in animal products.

The human body needs B12 to make red blood cells, nerves, and DNA. According to a study at the Harvard Medical School, the average adult should get 2.4 micrograms of B12 each day. In the US, the National Health and Nutrition Examination Survey recently estimated that 3.2% of adults over the age of 50 have a seriously low vitamin B12 level, and up to 20% may have a borderline deficiency.

Like most vitamins, B12 cannot be made by the body. It must be obtained from food or supplements. The foods highest in vitamin B12 include shellfish, liver, fish, crustaceans, beef, low fat dairy, cheese, and eggs. People who have eliminated these sources from their diets need to take professional advice from their GPs and nutritionists.

As for Miley Cyrus, the students decided the singer would be unable to “come in like a wrecking ball” without sustaining “significant injury.”

Their study at the University of Leicester focussed on the lyrics of the singer’s hit single Wrecking Ball on her album Bangerz. David McDonagh, a 24-year-old student from Brighton found that she would be unable to gather sufficient momentum to have “impacted” on either “love, or the walls of someone’s house,” as her lyrics suggest.

He concludes that she would need to be travelling at around 316 mph to demolish a wall – meaning she would need to be propelled by an outside force. “Based on these findings, it is clear that a human being cannot possess the characteristics of a wrecking ball without sustaining significant injury, and other objects should be sought as an analogy,” he concluded.

And as for me, I like this quote from Winnie the Pooh: “If ever there is tomorrow when we’re not together, there is something you must always remember. You are braver than you believe, stronger than you seem, and smarter than you think. But the most important thing is, even if we’re apart, I’ll always be with you.”

If, like me, you suffer from the symptoms of either Vitamin B12 deficiency or the symptoms of sarcoidosis, then I hope you can take courage. I have these symptoms, but they will never have me.

Posted by Patrick Comerford at 20:00 4 comments:

Email ThisBlogThis!Share to TwitterShare to FacebookShare to Pinterest
Labels: B12, Humour, Living with sarcoidosis, Science, Wind in the Willows, Winnie the Pooh

‘What we are doing here
is an ecumenical spring’ 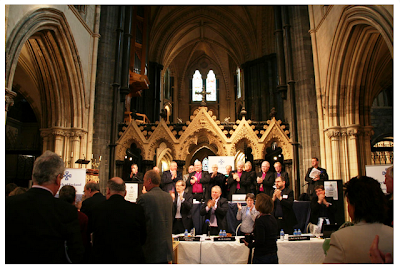 A standing ovation for the President of the Methodist Church, the Revd Dr Heather Morris, at the General Synod of the Church of Ireland this morning

As one of the hosts for ecumenical guests at this year’s Church of Ireland General Synod, I was sitting in the front row this morning beside the President of the Methodist Church, the Revd Dr Heather Morris, when the synod passed the final vote that now clears the way for the inter-changeability of ministry between the Church of Ireland and the Methodist Church in Ireland.

The Bill passed its third and final stage this morning in Christ Church Cathedral, Dublin, and has been enacted. It was proposed by Dean Nigel Dunne of Cork, who said this was an historic moment in the Church’s journey of faith. It was seconded by Bishop Michael Burrows of Cashel, Ferns and Ossory.

Speaking to those within the Church of Ireland for whom the passing of the bill will be difficult and who feel that this is a step beyond our Catholic heritage, he said if he had felt for one moment that his understanding of historic episcopate would be changed he would not have supported the move. He hoped that those who have felt hurt by the move understood that those who have been in favour of it do not hold them in any less regard. “You will always be loved in the Church of Ireland,” he said.

Bishop Harold Miller of Down and Dromore quoted the pioneering ecumenist, Father Michael Hurley, who once said we had been through an ecumenical winter. “What we are doing here is an ecumenical spring,” Bishop Miller said.

The Methodist President, Dr Heather Morris, said this was a great moment and she was thankful to God for the privilege of being at the Synod for this moment. “It is a great moment and it is also a moment that makes great demands on us,” she said. “The gift of receiving could be the biggest challenge ... The challenge is that we allow our traditions to help each other.”

It was a privilege to be beside her as she received a standing ovation.

To my right during this debate and vote was the Revd Dr Heinz Lederleitner, who brought greetings to Synod from the Old Catholic Churches. He said he had been warmly welcomed by members and the discussions of Synod had a certain weight but they were warm and friendly.

Posted by Patrick Comerford at 16:11 No comments:

In the ‘Church of Ireland
notes’ this morning 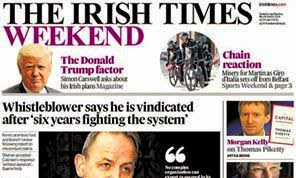 On Monday Canon Patrick Comerford will be at Lichfield Cathedral, giving a lecture and leading a tour of the Cathedral Close .The Close is an integral part of cathedral life in Lichfield, and includes the houses of the bishop, the dean, the residentiary canons, the cathedral offices and bookshop, as well as two smaller courts, each known as the Vicars’ Close, which once housed the vicars choral. Many of the houses date back to the 14th century or earlier, and famous residents in past include the poet Anna Seward and the medical pioneer Erasmus Darwin, grandfather of Charles Darwin. Professor Comerford is Lecturer in Anglicanism, Liturgy and Church History, the Church of Ireland Theological Institute. His lecture and tour, ‘Cathedral Close Stories,’ which starts at 7 p.m., have been organised by a local history society, Lichfield Discovered.

Canon Comerford will be speaking again on Wednesday evening when at 8 pm he will be co–launching, with Professor Patricia Lysaght, a new publication, The Moravian Burial Ground at Whitechurch, County Dublin, by Dr Rosemary Power, in Whitechurch Old Schools. The launch will be preceded by a tour of the graveyard at 6.30pm.

Posted by Patrick Comerford at 09:36 No comments: