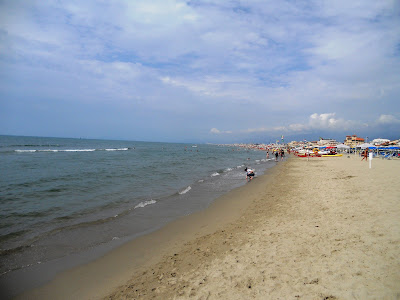 The beach at Viareggio ... when Shelley’s body was washed ashore, Byron had him cremated (Photograph: Patrick Comerford)

An Irish political party once ran a ‘Yes’ vote campaign in a referendum with the word ‘Yes’ in many European languages. But they left the accent off the Italian word “Sí” and so ran a “Si” or “but” campaign.

It was one of those “Yes, but ...” days for me in Tuscany yesterday [Thursday 30 August 2012] as my paltry Italian and my colour-blindness made it difficult for me to read Italian train timetables and I ended up taking the wrong train, not once, but twice.

And all I wanted to do was to have a walk on the beach ... perhaps even a shirt swim in the sea.

By the time the train pulled out of the next station, Montecatini Terme, I realised I was heading east towards Florence and not west towards the coast.

Where could we hop off? 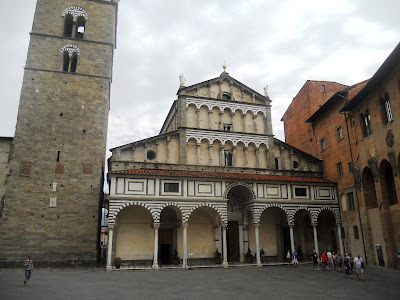 The Cattedrale di San Zeno in the Piazza del Duomo is at the heart of the centro storico in Pistoia (Photograph: Patrick Comerford, 2012)

We got off at Pistoia, and set a few hours exploring a delightful city, with its mediaeval ramparts and its centro storico.

We first visited the Piazza del Duomo and the Cattedrale di San Zeno, or Cathedral of Saint John, with its beautiful Pisan-Romanesque facade that is crowned with a lunette by Andrea della Robbia. Inside, in the Capella di San Jacopo in the north aisle is a silver altarpiece that took two centuries to erect and that was completed by Brunelleschi.

In the crypt, at the back of a simple chapel, are the tombs of many part Bishops of Pistoia, while the side walls above are decorated with monuments to many more past bishops, including Alessandro di Medici who later became Pope Leo XI and had a short reign of only 26 days.

After visiting the baptistry, we strolled through the maze of mediaeval sidestreets, visiting two other churches, before returning to the station and catching the right train –through Montecatini Centrale, Montecatini Terme and Lucca – to Viareggio and the coast.

When Shelley drowned at Viareggio in 1822 and his body was washed up on the beach, Byron had him cremated on the spot.

But there is nothing romantic about the beach at Viareggio. Instead it was disappointing. There is a beautiful long stretch of white sand, and it slopes gently into the sea. But the beach has been parcelled out and divided into lots by the local hotels, so that visitors and local people alike are corralled into a dirty corner at the end of the beach, beside the rocks.

This is Italian privatisation and dogmatic capitalism at their worst. There is even a sign warning that it is dangerous to swim because the lifeguard facilities are only for hotel guests. 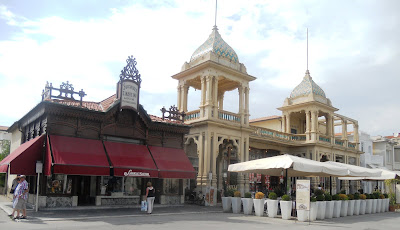 After a short swim we decided to give Viareggio a miss. We walked back along the tacky promenade at Viale Regina Margherita that looked more like Disneyland than coastal Italy – although we stopped to appreciate the Gran Caffè Ristorante Margherita, which had been a favourite of Puccini, and the Chalet Martini next door, dating from the 1860s.

It was back to Montecatini – if only we had boarded the right train towards Florence. We realised our mistake by time the train got to Pisa. There was no turning back, and it was just as well the train was going to Florence and not to Rome or somewhere more distant.

At Florence we found a train to Montecatini Centrale with little time to spare. As the train pulled out we caught another glimpse of the dome of the Duomo receding in the distance.

After a heavy day of travelling to nowhere and back several times, we had just enough time for a much-needed shower and to change. 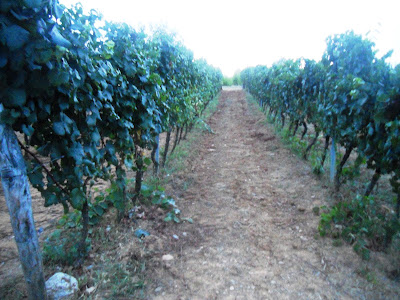 The vineyard on the slops at Fattoria il Poggia outside Montecarlo, near Lucca (Photograph: Patrick Comerford, 2012)

We joined a small group heading out for the evening to Montecarlo, near Lucca, to visit an olive grove and vineyard at Fattoria il Poggia. There were saw the olive presses used to press olive oil, drink wines from the grapes in the vineyard, and dined in the farmyard under the full moon.

We had soon put behind us all those missed trains and misread train timetables. As we raised our glasses, it was no longer “If” but “Yes.”

Posted by Patrick Comerford at 18:28 No comments: