Back to school, and a beach-side lunch in Bettystown

The Cooley and the Mournes, like blue mountains in a Paul Henry painting, seen from the beach at Bettystown, below the Relish Café, this afternoon (Photograph: Patrick Comerford, 2010)

After some rain, today [Monday] turned out to be a bright, sunny autumn day, even though we are now into the last week of October. This is a public holiday in the Republic of Ireland – known as Michael O’Leary’s holiday, even though it is about far away from May Day, and turns out this year to be a full week away from Halloween. As it was a public holiday, I ought not to have been working at home this morning. And so, after a few hours, I put away those books, closed down my laptop, and headed out for a walk on the beach.

Initially, two of us thought we would head to Skerries for a walk on the beaches there. But on the way I thought it would be a good time to take a look at my old school – after all, a holiday weekend would mean the place would be quiet, with few people around.

I lost my way off the M1 and almost ended up in the army camp ... well, the road layout has been radically altered, and both ‘The Cock,’ which claimed to be the oldest pub in Ireland, and the Gormanston Arms, which was completely off bounds in my days, have changed their names, and even though I was back there last year I was still a little confused. 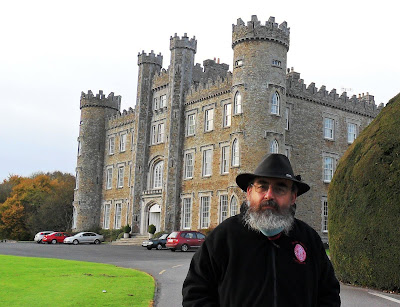 Back to school ... outside Gormanston Castle on a bright autumn afternoon

Eventually I found my way back, and was soon in the grounds of Gormanston College, where I was part of the year of 1969 ... and my eldest brother did the Leaving Certificate in 1964. Little has changed visibly, and I have happy memories of my school days there ... but I can’t imagine any of my teachers are still on the staff or that anyone there would remember me.

Gormanston Castle was built in 1786 by the Preston family, who held the title of Viscount Gormanston. The school buildings date mainly from the late 1950s and early 1960s, although the large outdoor bell in one of the quads is a reminder that the school has a tradition going back to the late 19th century when it was first established at Multyfarnham in Co Westmeath. 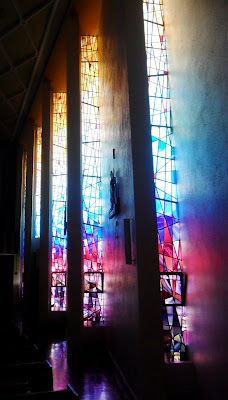 The design of the chapel in Gormanston was influenced by the newly-built Coventry Cathedral (Photograph: Patrick Comerford, 2010)

The design of the school chapel was influenced by Coventry Cathedral which had been built just a few years earlier. After visiting the chapel, we strolled around the castle, and around the grounds, which straddle the borders of Co Meath and Co Dublin. The grounds include a river, a mature wood, a nine-hole golf course, trees, woods, and several playing fields, in two different locations but contiguous with the college. 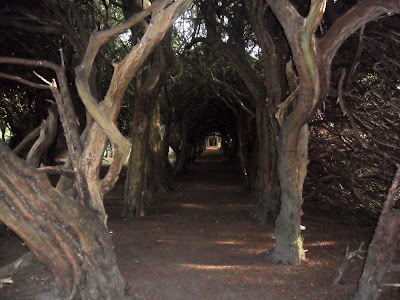 The Yew Walks in Gormanston were planted by the Preston family hundreds of years ago (Photographs: Patrick Comerford, 2010)

After walking around the castle, we walked down the yew walk, a foliage enclosed triangular area that was planted hundreds of years ago by the Preston family. The yew walk leads down to the graveyard, where several of the priests and some students are buried, including one boy who died at the age of 15 during my final year at school.

We walked back up past the golf course, around the front of the castle, down by a softly babbling brook and back to the chapel, where the car was parked in front of the swimming pool.

I wonder do they still show films in the theatre on Sunday nights? Do boarders still skip into Drogheda or Skerries? Do they still have debates with the same intensity and passion as when I was on the school debating team? Do they still play cricket on the beach on summer days?

The autumn sunshine was still holding, and the skies were still blue. There was still time for a walk on the beach. But instead of heading back to Skerries, we drove on to Julianstown, turned off to Laytown, and stopped in Bettystown.

The last time I was in Bettystown I complained that there were plenty of Chinese takeaways and chip shops, but that it was difficult to find a decent place to eat. But a little searching paid off wonderfully this afternoon. 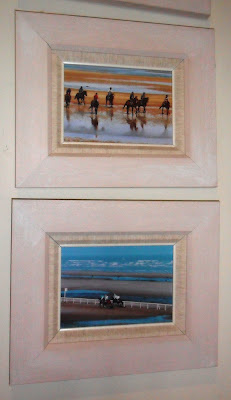 Paintings on the wall in the Relish Café in Bettystown, Co Meath (Photograph: Patrick Comerford, 2010)

Relish Café in Bettystown Village is set in a terrace of single story houses south of the Neptune Hotel looking out onto the beach. The courtyard is painted white and blue, giving the place a warm Mediterranean feeling. Inside the walls are filled with paintings, many of them of the summer races on the beach at Laytown and Bettystown.

The menu was exciting and attractive. I had goat’s cheese with a light pesto dressing on grilled Mediterranean vegetables in a filo basket and accompanied by couscous and garlic ciabtta; my friend had mixed bruschetta, with tomatoes, sweet onions and sun-dried tomatoes. We sat at a window looking onto the courtyard, but how I would like to return for dinner here in the evening, at one of the windows looking out over the beach and out to the sea.

From Relish, we strolled down onto the beach. The tide was out, and the sand stretched to breath-taking lengths. To the north, the Cooleys and the Mournes stood out in a blue silhouette, like mountains in a Paul Henry painting.

A brisk walk along the beach brought back happy memories of summer holidays here in the 1960s. We then headed north to Mornington at the mouth of the Boyne to see the the Maiden Tower and the Lady’s Finger, two unusual structures that were probably built as navigational aids for ships entering the River Boyne. The tower was already standing in 1582, when it was proposed to build a similar tower at Ringsend, a tower “of such height and strength as shalbe of a perpetual contynuance licke the towre at Drogheda.”

We headed on along the banks of the Boyne, past Drogheda Grammar School into Drogheda. As we drove along the Marsh Road, a train was heading south along the railway viaduct over the Boyne.

From the centre of Drogheda, we headed back through Julianstown and Gormanston, on through Balbriggan and Balrothery onto the M50. It was almost dark, and this unusual bank holiday had come to a beautiful end.
Posted by Patrick Comerford at 21:04 1 comment: