The Second Sunday of Advent: some notes
on this morning’s readings and hymns 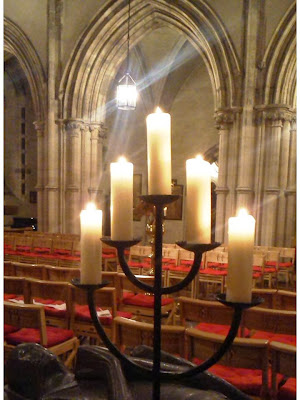 These readings are reflected in this morning’s hymns:

Processional Hymn: ‘Lo! he comes, with clouds descending’ (Irish Church Hymnal, 132) can be attributed to three writers. The original text is by John Cennick (1718-1755), who founded the first Moravian congregation in Ireland in Dublin in 1749 – and this hymn, inspired by Revelation 1: 7, was first sung in the Moravian Chapel in Dublin in 1750. Charles Wesley (1707-1788) rewrote the hymn.

The version we sing this morning owes much to later revisions by Martin Madan (1726-1790). The tune Helmsley may have been written by Thomas Olivers (1725-1799), but takes its name from a parish in Yorkshire where one of the earliest hymnals in the Church of England was published in 1767.

Gradual: ‘On Jordan’s bank the Baptist’s cry’ (136) was originally thought to be a mediaeval Latin hymn. But it was written by Charles Coffin, Rector of the University of Paris, and first appeared in the Paris Breviary in 1718. It was translated by the Revd John Chandler (1806-1876), Vicar of Witley.

Offertory: ‘Come, thou long-expected Jesus’ (119) was first published by Charles Wesley in 1745. The tune, Cross of Jesus, is from the cantata by Sir John Stainer (1840-1901), The Crucifixion, which was first performed in 1887. Stainer was the Organist and Master of the Choristers at Saint Paul’s Cathedral, London, and later Heather Professor of Music at Oxford. It was said of him that “he was one of the very few touched with the radiance of the inner life of sacred music.”

Communion Hymn: During the distribution and reception of Holy Communion, we sing ‘Jesus, remember me’ (617), by Jacques Berthier and the Taizé Community.

Post-Communion Hymn: ‘O come, O come, Emmanuel’ (135) is based on the Advent Antiphons or ‘Great Os’ from the ninth century or earlier. The version we sing this morning was translated in 1851 by John Mason Neale (1818-1866). The tune Veni Emmanuel was first published in 1854 by Thomas Helmore (1811-1890), who claimed it was based on a melody in a 15th century French Franciscan processional that he found in a library in Lisbon.

The French missal was never found, and it was suggested often that Helmore had written the tune himself until the late Dr Mary Berry of Cambridge found the tune in a 15th century processional used by French nuns.

Father in heaven,
who sent your Son to redeem the world
and will send him again to be our judge:
Give us grace so to imitate him
in the humility and purity of his first coming
that when he comes again,
we may be ready to greet him with joyful love and firm faith;
through Jesus Christ our Lord. Amen.

Lord,
here you have nourished us with the food of life.
Through our sharing in this holy sacrament
teach us to judge wisely earthly things
and to yearn for things heavenly.
We ask this through Jesus Christ our Lord. Amen.

Canon Patrick Comerford is Lecturer in Anglicanism and Liturgy, the Church of Ireland Theological Institute, and an Adjunct Assistant Professor, Trinity College, Dublin. These notes appear in the booklet prepared for this morning’s Eucharist.

Art for Advent (8): ‘The Peaceable
Kingdom’ by Edward Hicks 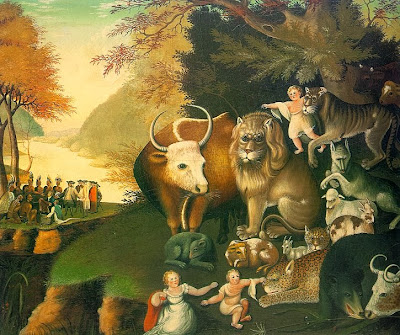 ‘The Peaceable Kingdom’ (1826) by Edward Hicks, The National Gallery of Art, Washington DC

6 The wolf shall live with the lamb,
the leopard shall lie down with the kid,
the calf and the lion and the fatling together,
and a little child shall lead them.
7 The cow and the bear shall graze,
their young shall lie down together;
and the lion shall eat straw like the ox.
8 The nursing child shall play over the hole of the asp,
and the weaned child shall put its hand on the adder’s den.
9 They will not hurt or destroy
on all my holy mountain;
for the earth will be full of the knowledge of the Lord
as the waters cover the sea.

Last Sunday, when I began this series, I chose as my first work of Art for Advent Noah’s Ark (1846) by Edward Hicks, which is in the Philadelphia Museum of Art.


This morning I return to the work of Edward Hicks, and have selected his ‘Peaceable Kingdom,’ which reflects this morning’s lectionary readings.

The Peaceable Kingdom paintings are the most recognisable works by Edward Hicks (1780-1849). In all, he painted 61 versions of this theme. My choice this morning was painted in 1826, and is now in the National Gallery of Art, Washington DC .

In his many versions of ‘The Peaceable Kingdom,’ Hicks depicts the lion as quick-tempered and wilful; the wolf is full of melancholy and reserved; the bear is sluggish and greedy; the leopard is buoyant. These were animal qualities with potential violence as well as rage, egoism and greed personified.

The peaceable kingdom slowly evolved as his signature subject. His symbols of the animals were joined to a quotation of Isaiah’s prophecy in this morning’s reading (Isaiah 11: 6), with Isaiah's words – at times paraphrased – lettered on the borders, or false frames, around the paintings, and the child placed centrally.

Later, he introduced the founders of American Quakerism, including William Penn signing a treaty with the Indians in Pennsylvania.

These paintings of the Peaceable Kingdom by Hicks portray a balance of difficult and unresolved issues. The lion-ego poses the greatest threat. The wild animals are domesticated and pacified by loving kindness.

A divided tree split by lightning is a major element in these paintings, representing the weaknesses of the wilful self, which is self-willed, egotistical, greedy and lustful, in conflict with the purer self, bathed in the Inner Light of Christ. At a more polemical level it may also represent the internal divisions that were splitting American Quakers into different branches and sects, some of which he saw as dead wood.

In our Gospel reading this morning, Saint John the Baptist declares: “Even now the axe is lying at the root of the trees; every tree therefore that does not bear good fruit is cut down and thrown into the fire” (Matthew 3: 10).

Edward Hicks allows us to see the Light of Christ, which we are anticipating at Advent, being poured out freely on all living beings and the world, speaking to that which shines within every one of us.