Summer begins on the banks of the Shannon 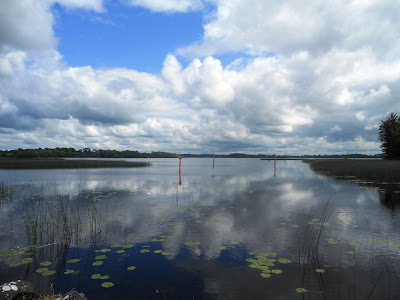 On the shores of Lough Derg and the Shannon at Portumna Harbour this afternoon (Photograph: Patrick Comerford, 2012)

The first day of June is traditionally the first day of summer in Ireland, although we have had some warm sunny, summer days for much of the month of May.

I woke to a dull start in Athlone this morning, but eventually it turned out to be a beautiful day by the River Shannon, visiting some monastic sites along the banks of the river in counties Westmeath, Roscommon, Galway, Tipperary and Offaly, all within a short range of each other. 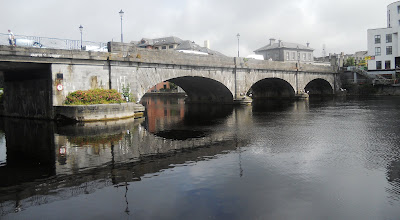 On the banks of the Shannon in Athlone earlier in the day (Photograph: Patrick Comerford, 2012)

At first, I went for a walk along the west bank of the Shannon, below Athlone Castle, and was delighted to come across Liturgical Book Restorers, a unique shop at 17 Main Street.

This part of Athlone has a continental charm about it, with an engaging little second hand book shop on the same terrace of houses and Sean’s Bar, which claims to be the oldest pub in Ireland, with the fantastic claim to date back to the year 900.

We climbed up the hill, and in Saint Paul’s bookshop I found two copies of a biography of Desmond Tutu I had written in 1987 – selling for 50 cent each.

In the Church of Saint Peter and Saint Paul, I enjoyed the Harry Clark windows, and on the way back to the car I was impressed by the variety of restaurants in the Athlone. 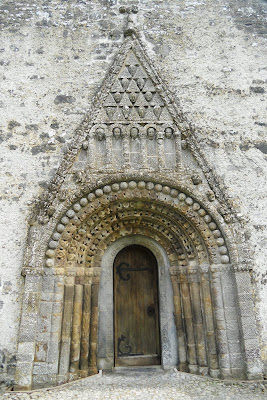 But it was still only noon, and we headed out west and then south to Clonfert in Co Galway to visit Saint Brendan’s Cathedral.

Clonfert Cathedral was listed by the World Monuments Watch in the 2000 World Monuments Watch. The soft sandstone structure has weathered severely and conservation efforts have not fully coped with all the problems. The deterioration has been compounded by substantial biological growth.

Nevertheless, the most startling sight at Clonfert is the cathedral’s Hiberno-Romanesque doorway. It is in six orders and has an amazing variety of motifs, including animal heads, foliage and human heads. Above the doorway a pointed hood encloses triangles alternating with bizarre human heads, and below is an arcade enclosing more human heads.

I expected the cathedral to be closed, but an Italian group of tourists was due, and the door beneath this Hiberno-Romanesque work was ajar. 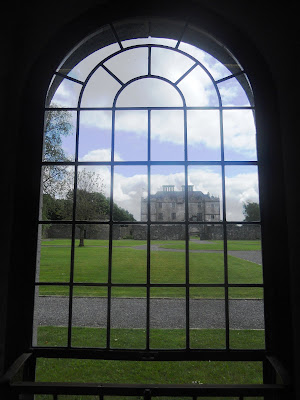 Portumna Castle ... seen through a a window in one of the gate lodges this afternoon (Photograph: Patrick Comerford, 2012)

From Clonfert we drove south to Portumna, on the shores of the Shannon and Lough Derg. Although no guides were available for a tour today, Portumna Castle was open, and I spent some time exploring this tastefully restored treasure from the 17th century, before wandering around the walled kitchen garden.

I was reminded of a connection between Portumna Castle and the Comberford family and Lichfield Cathedral. But this is another story for another day.

Beneath the slopes of the southern lawns of Portumna Castle, I whiled away some more time in the sunshine on the shores of Lough Derg, by the boats in the harbour and then by the reeds on the lakeshore. Fish were jumping, ducks were basking, and one swam was swimming between the jetties and the boats looking for bread. Summer has truly arrived, with boat owners tending their crafts, camper van owners preparing for a bank holiday weekend in the sun. 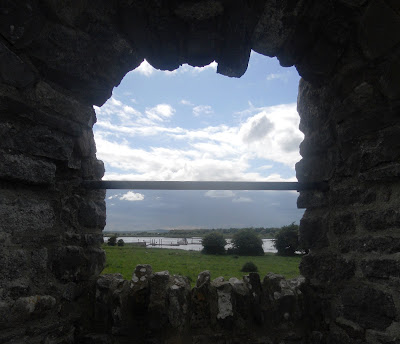 Looking out at the Shannon from the monastic ruins at Clonmacnoise in the late evening sunshine (Photograph: Patrick Comerford, 2012)

But it was time to move on, and – after stopping briefly at the ruins of Portumna Priory – we headed east across the Shannon, and then north again through the Tipperary and Offaly countryside, all the time keeping the Shannon on our left, until we arrived at Clonmacnoise.

This was my first time to visit this monastic foundation which dates back to the sixth century. The site stands on a bend on the river, and for an hour or two I was captivated as much by the beauty of the location as the history of the site and the grandeur of the buildings. But this too is another story for another day.