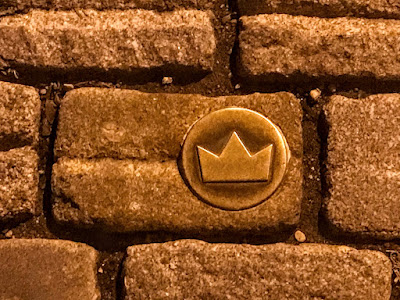 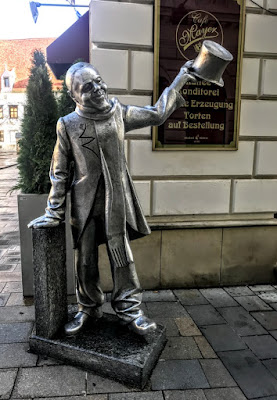 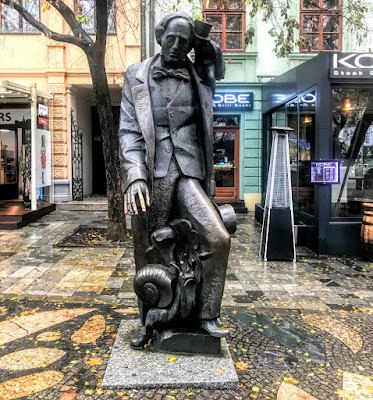 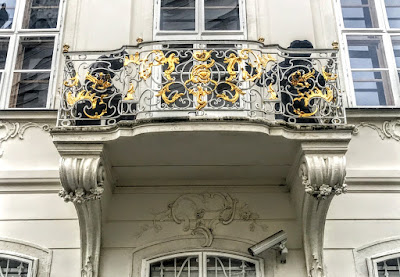 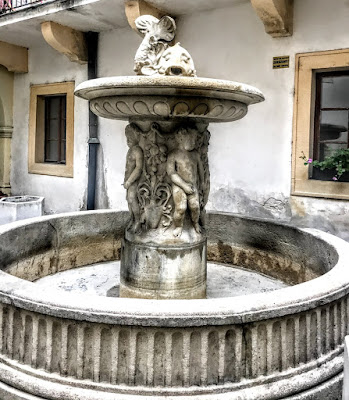 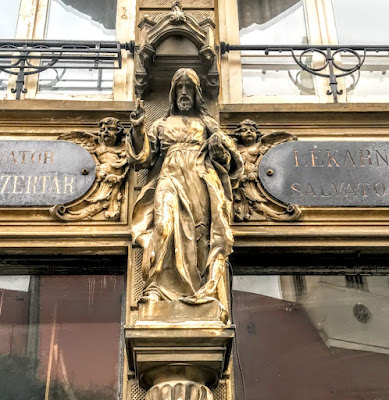 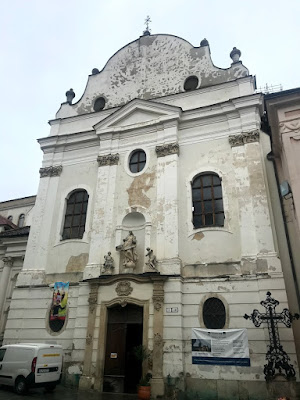 The Franciscan Church is the oldest surviving religious building in the Old Town of Bratislava (Photograph: Patrick Comerford, 2019)

Bratislava has more than 50 churches, cathedrals, chapels and places of worship. As I walked around the capital of Slovakia this week, I visited Saint Martin's Cathedral, one of the largest churches in Slovakia and the second most visited place in Bratislava.

However, I missed the Church of Saint Elizabeth, known locally as the ‘Blue Church’ and designed by the Hungarian architect Edmund Lechner.

The Franciscan Church is in front of the Arcadia Hotel, where I have been staying this week. This Gothic church, dating from the 13th century, is the oldest surviving religious building in the Old Town of Bratislava. It is said it was built by King Ladislaus IV of Hungary to commemorate his victory over King Ottokar II of Bohemia in 1278. It was built in the Gothic style and dedicated by King Andrew III of Hungary in 1297. 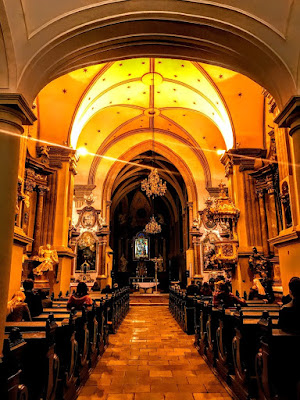 Inside the Franciscan church in Bratislava (Photograph: Patrick Comerford, 2019) 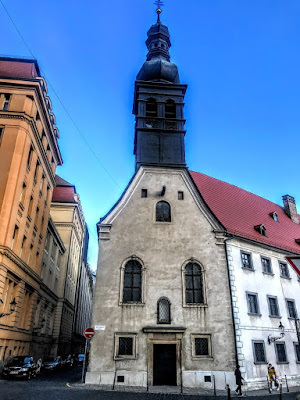 The Ursuline Church stands on the site of the first mediaeval synagogue in Bratislava (Photograph: Patrick Comerford, 2019)

The Ursuline Church, immediately east of the hotel, stands on the site of the first mediaeval synagogue in the city. This was a Protestant church until the 17th century, when the Ursuline nuns came from Vienna and Cologne to educate the daughters of local aristocrats and citizens. 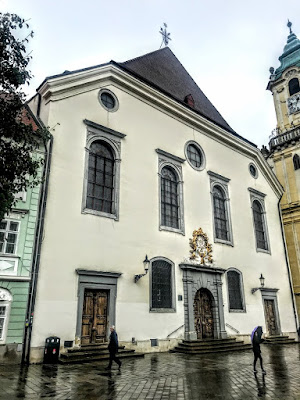 The Jesuit Church beside the Old Town Hall first built as a Protestant church in the 17th century (Photograph: Patrick Comerford, 2019)

The Jesuit Church of the Holy Saviour Church, to the south of the Franciscan church and beside the Old Town Hall, is just three minutes walk from the hotel. This too was a Protestant church in the 17th century.

The church was built in 1636-1638 for the growing number of German-speaking Protestants in Bratislava. Because a royal edict decreed the church could not resemble a Roman Catholic church, it was built without a spire or presbytery and without a street entrance. 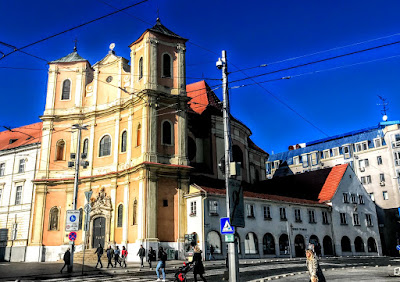 The Church of the Holy Trinity was built for the Trinitarian order in the 18th century (Photograph: Patrick Comerford, 2019)

The Church of the Holy Trinity was built in the baroque style in the 18th century for the Trinitarian order. Formally the Church of Saint John of Matha and Saint Felix of Valois, it stands on Župné Námestie Square.

The church was built on the site of the older Church of Saint Michael, demolished in 1529, along with the settlement of Saint Michael during the Ottoman wars, to reinforce the city defences against the attacking Turks.

The Trinitarian Order began building the church in 1717 and it was consecrated in 1727, although work in the interior continued throughout the first half of the 18th century. The church design was influenced by Saint Peter’s Church in Vienna.

The altarpiece depicts Saint John of Matha and Saint Felix of Valois ransoming prisoners from Turkish capture. The statues of Saint Agnes and Saint Catherine behind the main altar are attributed to the Bavarian sculptor Johann Baptist Straub.

When the Trinitarian Order was dissolved by the Emperor Joseph II in 1782, the monastery passed to the local government and became the administrative seat of the Pressburg county. The Great Hall was used for concerts by Franz Liszt and Johannes Brahms, and later for the Slovak National Councils until they moved into a new parliamentary building beside Bratislava Castle. 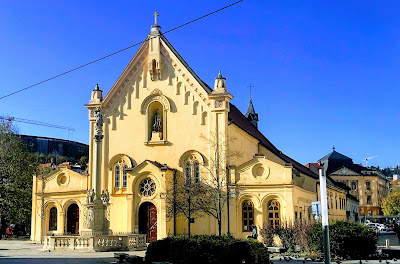 Saint Stephen’s Capuchin Church has a simple beauty. This church is dedicated to the first Hungarian king.

A Plague Pillar in front of the church, dating from 1723, is dedicated to the Virgin Mary. 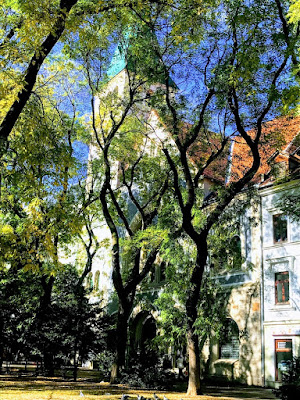 The Reformed Calvinist Church is part of a church in Slovakia that has 110,000 members in 205 parishes, 103 mission churches and 59 house fellowships. Unlike other Reformed or Presbyterian churches, this church, in the Hungarian style, had a bishop.

The Calvinist Reformation reached this part of Slovakia in the 1520s and four presbyteries was formed in Eastern Slovakia, Later they were later protected by the Princes of Transylvania, and until World War I these parishes in Slovakia were part of the Reformed Church in Hungary. A theological seminary was founded in Lucenec in 1925, and the church adopted new constitutions in 1950s and after the fall of communism. 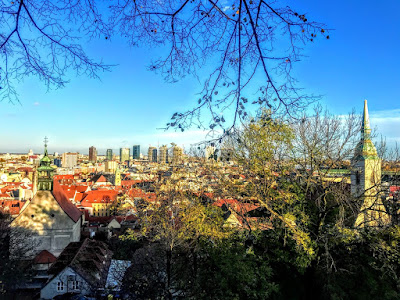 On my way down the hill from Bratislava Castle this week, I stopped to look at the locked Saint Nicholas Church, an Orthodox church built in 1661 by Countess Frances Khuen, the widow of Paul Pálffy (1589-1655), before she died 1672.

This early baroque church is simple, single nave church with a small wooden bell tower. It was built on the site of an earlier Gothic church dating back to the 11th century. After the castle area was incorporated into Bratislava, the church was administrated by a Catholic funeral society in Saint Martin's parish. 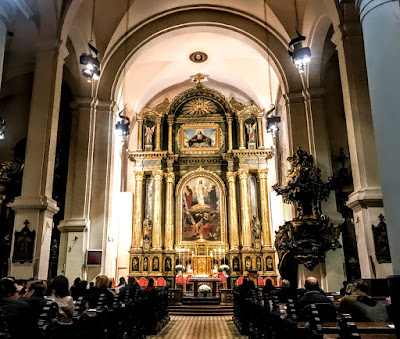 Inside the Jesuit church in the heart of the old city (Photograph: Patrick Comerford, 2019)