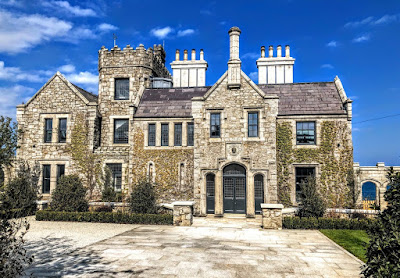 On the way back from Bulloch Harbour and a walk through Dalkey Village last week, Coliemore Road was lined with a number of elegant houses looking out to Dalkey Island and the Irish Sea. These Victorian Villas were built in the 19th century as summer residence for prosperous people who found the new railway line allowed them to escape to the sea airs while they continued their professional practices in the city centre.

They include houses such as Rockview, now on the market, Cliff Castle, recently sold, Inniscorig, built for a pioneer in Victorian medicine, and Queenstown Castle.

I have written in the past about Dakey’s mediaeval castles, but these romantic, castellated villas and mansions had no mediaeval historical background; instead, they were suburban statements of wealth by the post-Famine professional classes in Dublin.

Inniscorrig is one of these romantic mansions, with a spectacular and coastal position and its own private harbour. The working harbour is one of only two in private hands in Dublin and provides direct sea access.

Inside, there are sea views from all the principal rooms. The accommodation extends to 536 square metres, including a lodge house, and the grounds extend to 0.3 hectare (0.75 acre) along the shoreline, with panoramic coastal views that stretch from Dun Laoghaire over the bay to Howth Head, taking in the rocky seashore and Dalkey Island.

Inniscorrig was built in 1847 by the Dublin physician Sir Dominic Corrigan (1802-1880), who first diagnosed the heart condition known as Corrigan’s Pulse.

Corrigan was born in Thomas Street, Dublin, on 2 December 1802, the son of a dealer in agricultural tools, and was educated in Saint Patrick's College, Maynooth. There he was inspired to study medicine by the physician in attendance, and spent several years as am apprentice to the local doctor, Edward Talbot O’Kelly.

Corrigan studied medicine in Dublin, later transferring to Edinburgh Medical School where he received his MD degree in 1825. He then returned to Dublin and set up a private practice, first at 11 Ormond Street, later at 12 Bachelor’s Walk, and from 1837 at 4 Merrion Square West.

His work with many of Dublin’s poorest people led to him specialising in diseases of the heart and lungs, and he was a hard-working physician throughout the Great Famine. He was also physician to Maynooth College, the Sick Poor Institute, the Charitable Infirmary Jervis Street (1830-1843) and the House of Industry Hospitals (1840-1866).

Corrigan’s application to become a Fellow of the Royal College of Physicians of Ireland was rejected in 1846. But he was appointed physician-in-ordinary to Queen Victoria in Ireland in 1847, and he received an honorary MD from Trinity College Dublin two years later.

Corrigan challenged the opposition he had faced in the RCPI by sitting the college's entrance exam with the newly qualified doctors in 1855. He became a fellow in 1856, and in 1859 was elected president, the first Roman Catholic to hold the position, and ge was re-elected president an unprecedented four times.

He was given the title of a baronet, with the designation ‘of Cappagh and Inniscorrig’, in 1866, partly as a reward for his services as a Commissioner of Education. He was elected a Liberal MP for Dublin at a by-election in 1870. In Parliament, he actively campaigned for reforms in education in Ireland and the early release of Fenian prisoners. But his support for temperance and Sunday closing of pubs may have antagonised his constituents and he did not stand for re-election in 1874.

Corrigan married Joanna Woodlock, the daughter of a wealthy merchant, and sister of the Bishop Bartholomew Woodlock of Ardagh, in 1827. They were the parents of six children, three girls and three boys. Their eldest son, Captain John Joseph Corrigan, died on 6 January 1866 aged 35 years and is buried in Melbourne, Australia. His grandson succeeded him as the second baronet.

Corrigan died at Merrion Square, Dublin, on 1 February 1880, and he is buried in the crypt of Saint Andrew’s Church, Westland Row. A statue of Corrigan by John Henry Foley stands in the Graves Hall of the Royal College of Physicians in Ireland in Kildare Street, Dublin. The Corrigan Ward in Beaumont Hospital is named in his honour.

His title was inherited by his grandson, Sir John Joseph Corrigan (1859-1883), but he died at the age of 23 and with him the family title died too.

Prominent guests at Inniscorrig included King Edward VII and King George V. Their visits are commemorated by a crown and star set in pebbles into the patio terraces on either side of the front door along with elaborate plasterwork motifs throughout. Corrigan himself is commemorated in a granite bust over the front door.

The interior plasterwork includes Tudor roses and mosaics, and there is a fifth bedroom in the tower. The Italianate gardens link the house and grounds, with arched granite statue niches either side of the front door combining with a series of Gothic arches. They protect a ‘secret garden’ and frame the views of the islands and the sea.

A decked terrace off the sea-front elevation leads to a lawn terrace and to the harbour terrace. Protected from westerly winds, this large harbour terrace provides a harbour-side sanctuary and an entertaining plaza. There is a tidal swimming pool and a boathouse, and the harbour includes a working winch, and boasts a separate.

When this Gothic Revival mansion went on sale in 2015, it was described as Dublin’s latest ‘most expensive home,’ with an asking price of €10.5 million. Inniscorrig sold after two years on the market. 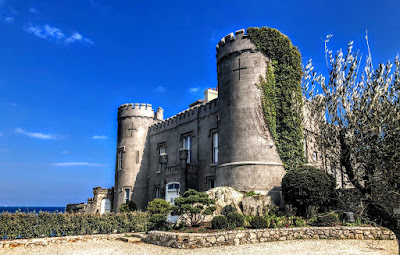 Neighbouring Cliff Castle sold at auction for more than £2.5 million in 1999. It was built as a private residence in the 1840s, and was a popular hotel until the 1980s. It was run by the McGettigans and earlier by the Phelans of the Miami Showband.

Cliff Castle was known as a venue for wedding receptions and 21st birthday parties, and, during the 1960s for its afternoon tea dances.

It has a floor area of around 6,000 sq ft, and is now a five-bedroom family home. The internal features include a turret room with a roundel of stained-glass set high overhead in the domed ceiling.

Cliff Castle, with its battlement towers, stands on three-quarters of an acre with extensive water frontage, its own harbour and a large suntrap garden behind high walls.

Rockview stands on a quarter-acre site and is on the market (Photograph; Patrick Comerford, 2021)

Rockview is another Victorian home on Coliemore Road with a sea-front site of about a quarter of an acre with direct shoreline access.

Rockview is a five-bedroom house and is on the market through Sherry FitzGerald, with an asking price of €5.25 million.

Queenstown Castle is a castellated Victorian property further up Coliemore Road. It is no longer a private residence for a single family but has been converted into five apartments. 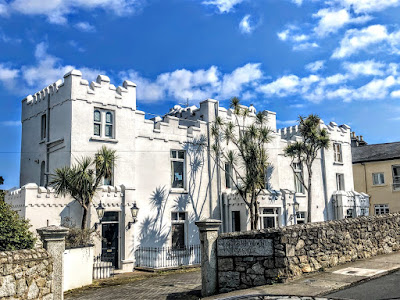 Updated: 24 April 2021; thanks to Georgina Sweetnam for coredctions to the dates for John Robinson, father and son. 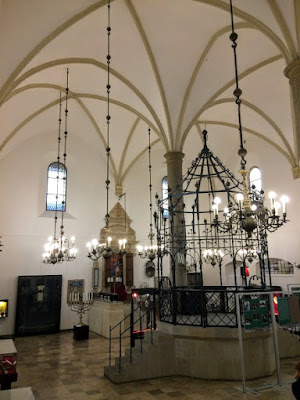 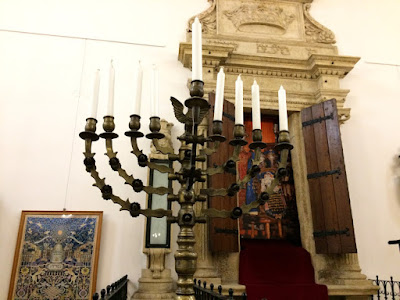 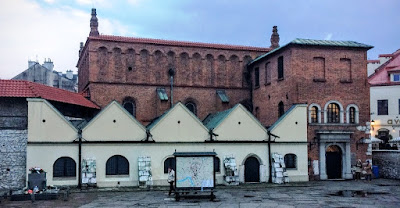 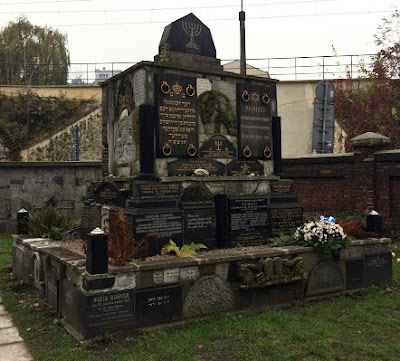