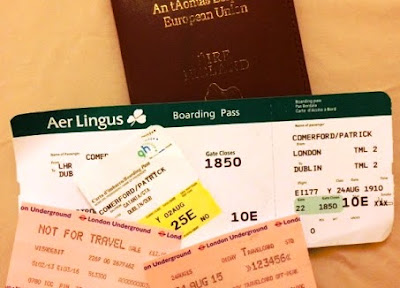 Why should I show my boarding pass at WH Smith’s in Heathrow? (Photograph: Patrick Comerford, 2015)

After a long working day in London yesterday [24 August 2015] I wanted to test the opportunity of refusing to show my boarding pass while buying newspapers at WH Smiths in Terminal 2 in Heathrow.

For the past few weeks, British newspapers have been reporting how air travellers are refusing to show their boarding passes at airport shops after revelations that the information is used by stores to avoid paying VAT, without passing on the discount to customers.

Like all frequent travellers, I find it tiring to be asked for my boarding pass when all I want to buy is the Guardian or the Economist.

I am constantly told, often through clenched teeth, that this is for security reasons. What security reasons? I have already been through all the security controls, checks and barriers, and have been photographed countless times.

I am never asked for my boarding pass when I’m buying a cup of coffee or a glass of wine. So why is the Guardian or the Economist a security threat, when a doubles espresso or a glass of Pinot Grigio is not?

I have always suspected that the reason my boarding pass is demanded is because retailers like WH Smith and Boots are scanning them for marketing reasons and phishing for details of customer habits. Yet every time they demand my boarding pass they do not offer an outline of their data control policies.

I sometimes wondered about the response if I refused to show my boarding pass until they gave me data control assurances, promising I would not receive unsolicited mailings or hand on my details to cold callers.

In the past, I have left my boarding pass with someone else while I went shopping in airports in Greece, and yet have been served with courtesy and understanding. Why does this not happen in airports in Britain?

Why can I buy a newspaper by putting money in an honesty box in Dublin Airport, but have to go through this rigmarole of fumbling for my boarding pass at Heathrow, Stansted and Birmingham.

But it turns out that the demand for boarding passes is not a marketing scam or phishing ruse, but part of a VAT rip-off.

Readers have been inundating English newspapers with threats to refuse to show their boarding cards in future, and there have been reports of protests at airport branches of WH Smith and Boots.

Airport retailers demand boarding cards from customers to avoid paying 20 per cent VAT on everything they sell to passengers who are travelling outside the EU, as there is no purchase tax due on such goods. Most of these outlets do not pass on the millions in savings to customers.

Shop staff regularly tell customers that we cannot buy something showing our boarding cards. The retailers claim a dual pricing system would be a practical impossibility and deny any suggestions that any chains are breaking the law. But telling the customers that the demand for boarding passes is for security reasons is bare-faced lying.

WH Smith, which operates several concessions in Dublin Airport, recently told The Irish Times that boarding passes are “requested from customers and not demanded” and there is no obligation on the part of consumers to comply with the request.

But in my experience at Heathrow, Stansted and Birmingham, it is always a demand.

In fact, boarding passes can only be insisted on when a customer is trying to buy duty-free products such as tobacco and alcohol. Newspapers, magazines and books do not attract VAT ratings.

Retailers in British airports are maximising their profits by scanning boarding passes and using the information to claim VAT back from passengers who travel outside the EU while refusing to pass the rebates back to customers. Under EU law, retailers can claim back VAT on sales to those leaving the EU but they have to process boarding cards in order to claim it.

But VAT is collected on behalf of the State and is not part of a retailer’s proper profit margin. VAT relief at airports is intended to reduce prices for travellers not as a windfall gain for shops. If a large number of VAT rebates cannot be processed because travellers like you and me refuse to show our boarding cards, then this is going to hit the retailers’ profits.

This was my sixth return flight between Dublin and English airports this year, and I have another later this week. I feel I have provided too much information for no reason whatsoever each time as I have queued with bags and newspapers and books for 10 minutes and then forced on demand to fumble for my boarding pass on the pretence that this is the law and this is for security reasons.

I have been tempted to move from paper boarding passes to mobile boarding passes, but have been hesitant because of high roaming charges on my phone. I would certainly not want to hand over my phone to WH Smith, not knowing what guarantees are in place for protecting any date they then have access to.

My meetings in London yesterday finished earlier than I had expected, and I had booked the last flight back to Dublin from Heathrow, Flight EI 183 at 21:19, due into Dublin at 22:40.

I was too late to catch the tube from Southwark to Westminster Abbey for Evensong at 5 p.m. I could have stayed in central London, and had an early dinner there. Instead, I decided to stay on the Jubilee Line to Green Park, and change to the Piccadilly Line and continue on to Heathrow.

I would be three hours early, but I could eat in comfort and without haste, do some work on my laptop … and I could see whether it was now possible, after all that media coverage and those protests to buy a newspaper at WH Smith while refusing to produce my boarding pass.

I had already printed out my boarding pass, Terminal 2 was reasonable quiet, and there were no queues at the Aer Lingus checkout desks. And then I wondered, just wondered. There were two earlier flights to Dublin: EI 177 at 19:10 and EI 179 at 20:10. There was less than an hour to go for the first of these flights, but the second one held the promise of being home an hour earlier.

The Are Lingus check-in-staff in Zone C could not have been more helpful or friendlier. Yes, they could change my booking, even though I had checked in online and printed out my boarding pass. No, there would be no charge. And yes, they could me on the earliest of those flights, they could see there were small queues at security and there were no problems ahead. 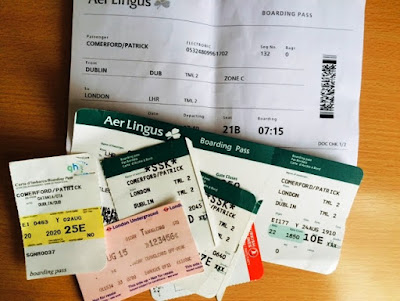 The experience at check-in in Heathrow last night was markedly different from that in Catania three weeks earlier (Photograph: Patrick Comerford, 2015)

What a difference to my experience of trying to check-in with Aer Lingus at Catania in Sicily earlier this month [2 August] on Flight EI 463, when the queue stretch for over an hour, out of the airport, and when we were left standing, waiting for almost 45 minutes, without explanation or polite words when boarding was delayed!

I was through security last night in no time. In normal circumstances, had I arrived at an airport less than 50 minutes before departure, I would have been panicking. I was certainly glad that Aer Lingus had moved to Terminal 2, and the long, dreary, wearying trek at Terminal 1, ending at poor and ramped facilities at the departure gates, has been a thing of the past since July last year.

But there was no time for even a double espresso or glass of Pinot Grigio, and certainly no time for a meal. My flight was boarding, and I was going to be home two hours earlier than planned, thanks to the staff of Aer Lingus at Heathrow. 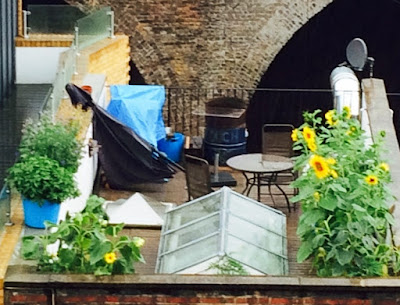 A glimpse of summer through the rain and thunderstorms … sunflowers on a roof garden in London (Photograph: Patrick Comerford, 2015)

I spent a long working day in London yesterday [24 August 2015] at meetings in the offices of Us (the new name for the Anglican mission agency USPG), discussing trusteeship, governance and corporate responsibility in the charity sector and the relevant legislation.

Even in a busy, working part of south London, surrounded by commercial and industrial buildings, busy railway tracks, hotels and building sites, there were glimpses of the attractions of ‘tourist’ London with a sight of the London Eye, and glimpses of summer through the August rain and thunder showers with a roof garden displaying bright blooming sunflowers immediately below the room where we were meeting. 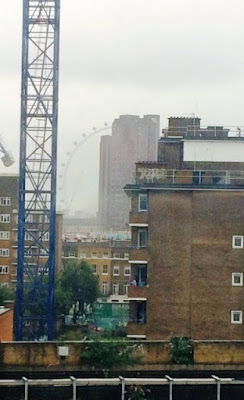 The London Eye in the distance … through the rain, the towers and the cranes (Photograph: Patrick Comerford, 2015)

We opened with prayer, and as Monday was Saint Bartholomew’s Day our Gospel reading (John 1: 43-51) was the story of the calling of Nathanael, who is generally said to be the same disciple as Bartholomew:

In other words, from the beginning, the Gospel tells us Christ breaks down the barriers between Jew and Greek or between Jew and Gentile, ethnic , social and cultural divisions are torn down by Christ from the very beginning, and this task is one of the first demands in mission.

Almighty and everlasting God,
who gave to your apostle Bartholomew grace
truly to believe and to preach your Word:
Grant that your Church
may love what he believed
and preach what he taught; through Jesus Christ our Lord,
who lives and reigns with you and the Holy Spirit,
one God, for ever and ever. Amen. 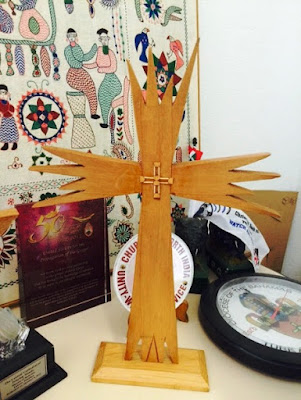 Praying and talking about mission in the offices of Us (the new name for USPG) in London yesterday (Photograph: Patrick Comerford, 2015)