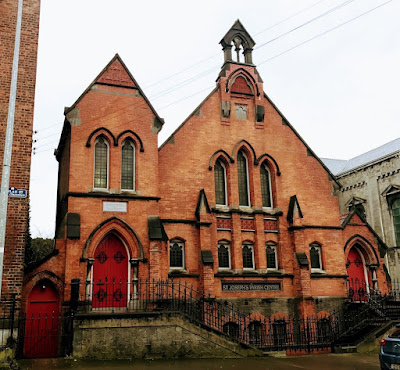 I had hopped off the bus at the corner of Upper O’Connell Avenue, because I wanted to begin researching the story of Limerick’s Jewish community, which was once based in the street now known as Wolfe Tone Street. But I was distracted by the story of another religious minority in the city, the Baptists.

The former Baptist Church on O’Connell Avenue was built in 1894. It was designed by the Dublin-born architect George Palmer Beater (1850-1928) and was built by a local building contractor, MP Kennedy who lived nearby at 3 Military Road, now O’Connell Avenue).

The new church was built to seat up to 300 people and also included a lecture room and several classrooms under the church. It was built in redbrick, dressed with limestone, and cost over £2,000 to build.

The Irish Builder reported on 15 April 1894: ‘The Baptist Church Limerick is now in course of erection. It is of red brick with limestone dressings. Under the church itself is a fine lecture room, several class rooms, and other minor apartments. The church will seat about 300 and will be heated by a Grundy’s apparatus.’

To the right and left of the front façade, there were separate entrances for men and women.

The architect George Palmer Beater (1850-1928) was born in Dublin, a son of Orlando Beater, of Glenarm, Terenure, who was chairman of Arnott & Co Ltd. He was educated in Dublin and then articled to the architect Alfred Gresham Jones.

Beater’s career spanned a period from 1873 to 1926, and at various times he worked from Molesworth Street, Dawson Street and Leinster Street. At the time the Baptist Church was built in Limerick, Beater’s practice was based in Lower Sackville Street, Dublin, now O’Connell Street.

Beater supported many charities in Dublin, and was a Governor of the Royal Hospital for Incurables and the Old Men’s Home on Leeson Park. He was a fellow of the both the Royal Institute of Architects in Ireland (member, 1878; FRIAI, 1919) and the Royal Society of Antiquaries in Ireland (FRSAI, 1898).

Beater died at his home at 9 Brighton Road, Rathgar, on 8 February 1928, and he was buried in Mount Jerome Cemetery. His obituary in the Irish Builder said he was ‘a kindly, courteous gentleman, liked and respected by all who knew him.’

This ornate red brick Gothic Revival church is enriched with an elaborate façade treatment and its small scale contrasts with the Georgian terrace to the north and the classical style early 20th century Saint Joseph’s Church to the south. This building adds to the variety of this section to the end of O’Connell Avenue and marks the end of the early 19th century city and the beginning of the early 20th century suburbs.

This is a free-standing, rectangular plan, double-height over raised basement, red brick and limestone gable-fronted church, built in the Gothic Revival style. There is a two-storey gabled entrance bay to the north and a single-storey gabled entrance porch to the south, approached by two flights of steps flanked by railings.

About 60 people attended the last service in the Baptist Church on Upper O’Connell Avenue in 1992. A new Baptist church was completed in Caherdavin soon afterwards.

A carved stone over one of the paired main doors recalls: ‘This centre was purchased by the people of St Joseph’s Parish in 1995 during the administration of Very Rev Donal McNamara.’

Sadly, there is no mention of the past life of this former Baptist Church, or of its architect. Perhaps Limerick Civic Trust may rectify this in the near future. 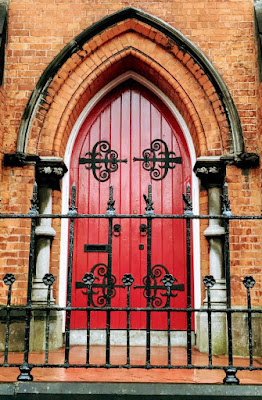 One of the paired entrance doors in the former Baptist Church on Upper O’Connell Street, Limerick (Photograph: Patrick Comerford, 2017)

Posted by Patrick Comerford at 09:30 3 comments: 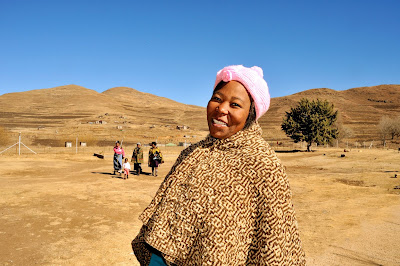 ‘Give thanks for the generosity of those who share out of their abundance’ … Agnes who had her baby at Saint James's Hospital in Mantsonyane, Lesotho, which is supported by USPG (Photograph: Leah Gordon, USPG)

This week, from Sunday (12 March) until today (18 March), the USPG Lent Prayer Diary is following the topic ‘How shall we live.’ The topic was introduced on Sunday in an article in the Prayer Diary by Maropeng Moholoa, of the Anglican Church in Southern Africa, who oversees a USPG-supported community development programme in Lesotho.

Give thanks for the generosity of those who share out of their abundance. May we remember those whose circumstances mean they might struggle to share as much.