Who can identify the Earley and Powell
statues on the façade of Mount Argus? 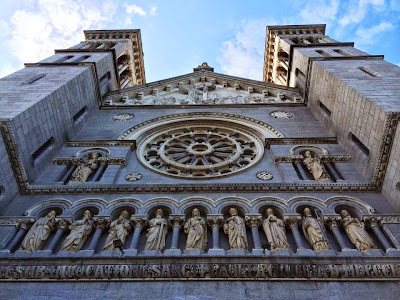 The statues on the façade of JJ McCarthy’s church in Mount Argus are the work of Earley and Powell (Photograph: Patrick Comerford, 2014)

I was at the Passionist church in Mount Argus, near Harold’s Cross, on Sunday evening for a Mass organised by some family members.

Sunday was the Second Sunday after Trinity in the Calendar of the Church of Ireland, but traditionally 29 June also marks the Feast of Saint Peter and Saint Paul, recalling their martyrdom in Rome.

Their feastday is also an ecumenical occasion, for their unity and diversity symbolise the unity the Church should strive for.

As I photographed the interesting statuary on the façade of the monastery church afterwards, I realised that in the group of nine statues above the main doors Saint Peter and Saint Paul stand on either side of Christ depicted as the Sacred Heart.

The church at Mount Argus is one of the rare examples of North Italian Romanesque architecture by James Joseph McCarthy (1817-1882), who preferred the Gothic style of his mentor, AWN Pugin.

The foundation stone of the church was laid on 19 June 1866, work started in 1873, and the church opened on 28 April 1878. Although it took almost 12 years to complete the building work, McCarthy, saw the project through to the end. The contractor was Meade, but the church was built by direct labour. All the sculptures and paintings are by the partnership of Earley and Powell.

The Earley and Powell partnership of church decorators worked in Dublin from 1864 until 1893. The business was initially established by Thomas Earley and the brothers Edward and Henry Powell in 1853 as a branch of the Birmingham firm of church decorators, John Hardman & Co, which is closely identified with the work of AWN Pugin.

The original Dublin premises of Hardman’s were at 48 Grafton Street, and by February 1860 they had a workshop at 1 Upper Camden Street. Hardman’s gave up their connection with the Dublin business in 1864.

Thomas Earley was born in Birmingham in 1819, the eldest son of James Earley, a bricklayer who, according to family tradition, came from Drumshambo, Co Leitrim.

Thomas worked as a decorative painter for AWN Pugin and the Birmingham-based church decorating firm of John Hardman & Co in England, France and Belgium. He set up a Dublin branch of Hardman’s in 1853, and was soon joined by John Hardman’s nephews, Edward and Henry Powell.

Their original shop was at 48 Grafton Street, and in 1857 they opened a workshop at 1 Upper Camden Street. The Grafton Street shop was abandoned between 1860 and 1863. At about the same time Thomas Earley’s younger brother, John Farrington Earley, also joined the firm.

In 1864, Hardman’s gave up their connection with the Dublin business, but it continued until the 1890s under the name of Earley & Powells, and later as Earley & Co.

Thomas Earley lived at 51 Lower Clanbrassil Street from ca 1863 to 1875. He was in failing health for some time before he died at the home of his old friend, Father James Baxter, parish priest of Clondalkin, on 28 June 1893. He left the business to his nephew, John Bishop Earley, son of John Farrington Earley.

Henry Powell, who was born in England in 1835, was a nephew of the Birmingham church decorator John Hardman, the younger, and a brother-in-law of Edward Welby Pugin’s sister, Anne, who was married to John Hardman Powell. Henry lived at 25 Elm Grove, Ranelagh, and died on 17 November 1882 at the age of 47.

The figure at the top of the façade is Saint Michael the Archangel, who was once the principal patron of the Passionist order. Under that statue is a relief showing Saint Paul of the Cross preaching to the crowd from a mission platform, with the angel whispering in his ear as he preaches.

Below the relief, on each side of the great Rose Window, are two further statues: the Virgin Mary with the Christ Child (to the viewer’s left) and, I imagine, Saint Joseph (to the viewer’s right).

Immediately below what I think is a grouping of the Holy Family is a collection of nine statues in a row.

But who are the other saints in this collection? One of the mitred bishops is holding a crozier and may possibly be Saint Patrick. The other may be Saint Laurence O’Toole, included because he is the patron saint of Dublin. But can anyone identify the other saints in this interesting collection by Earley and Powell? Identifying them would help develop the story of Pugin’s disciples and their work in Ireland.

Posted by Patrick Comerford at 23:05 2 comments: