Mothering Sunday in the cathedral and on the beach in Portrane 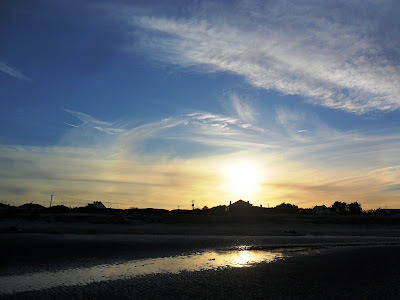 Sunset on the beach at the Burrow in Portrane this evening (Photograph: Pastrick Comerford, 2011)

The choir was in beautiful form at the Sung Eucharist in Christ Church Cathedral, Dublin, this morning. The Revd Garth Burning was presiding and the Revd Canon Dr John Bartlett was preaching. The setting was the Missa Petre ego te rogavi by Alonso Lobo (1555-1617), and the Communion Motet was Lobo’s Funeral Motet, Versa est in luctum cithara mea (“My harp is turned to mourning”).

Once again, we began with one of the verses of the Lent Prose, and the Post-Gospel Hymn was Bishop Walsham How’s It is a thing most wonderful, set to the tune Herrongate, an Essex folksong adapted by Ralph Vaughan Williams.

Over coffee in the crypt, it was interesting to look at Nathaniel Sneyd’s monument, which has been cleaned and restored in recent weeks.

The memorial, which is the mutilated tomb of Nathaniel Sneyd, is generally regarded as being Kirk’s masterpiece. The memorial says Sneyd, who died died in 1833, “perished by the indiscriminating violence of an unhappy maniac” – he was shot in Westmoreland Street by John Mason, the brother of a Dublin clergyman. The monument represents him lying dead with a female figure weeping over him. 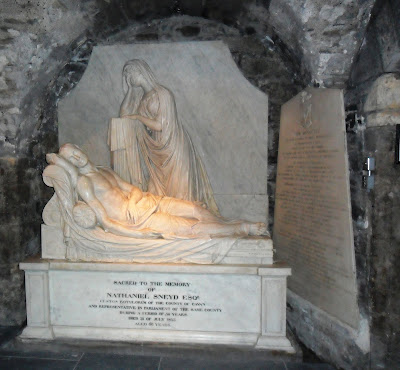 The Sneyd monument at the West End of the Crypt in Christ Church Cathedral, Dublin (Photograph: Patrick Comerford, 2011)

Sneyd lived at Chesterfield House on Cross Avenue, Blackrock. He was an eminent wine merchant, MP first for Carrick and then for Co Cavan, Custos Rotulorum for Co Dublin and Deputy Governor of the Bank of Ireland. In 1805, he voted voting against the Catholic Petition to abolish the Penal Laws.

In Dublin on 29 July 1833, 66-year-old Sneyd was strolling along Westmoreland Street to his townhouse in Sackville Street (now O’Connell Street), when he was attacked by John Mason outside the Bank of Ireland on College Green. Mason discharged a loaded pistol at his head, and Sneyd fell immediately to the ground. He was then hit by a second shot and a violent blow from the butt end of the pistol. Mason put up no resistance, nor did he attempt to escape.

Sneyd was buried in Lord Downes’s family vault in Saint Mary’s churchyard in Dublin and the handsome monument was erected in Christ Church Cathedral by public subscription.

The inscription reads: “Inscrutable are the dispensations of Providence. This man so blameless in all the relations of his being so respected and so beloved perished by the hand of violence but it was the indiscriminating violence of an unhappy maniac while the universal sentiment of profound and poignant sorrow excited by the afflicting event amongst all classes of his fellow citizens supplied the truest and the most expressive tribute to those virtues of which it is the purpose of this memorial to preserve the record and to perpetuate the remembrance.”

There is another Sneyd family connection with Ireland. In 1773, Honora Sneyd, the daughter of Edward Sneyd, married the Irish politician, writer, inventor and rake, Richard Lovell Edgeworth (1744-1817), in Lichfield Cathedral. Richard Edgeworth was then living at Stowe House in Lichfield, and Honora, who had grown up in the Bishop’s Palace, was a close friend of the writer Anna Seward, the “Swan of Lichfield,” whose father, Canon Thomas Seward performed the wedding.

Honora died on 30 April 1780, and within eight months Richard married Honora’s younger sister, Elizabeth, on Christmas Day 1780. In all Richard was married four times, and the Sneyd sisters from Lichfield were both step-mothers to the Irish writer Maria Edgeworth.

It was a curious story to recall on Mothering Studio. It was more surprising, as I sat to lunch in La Dolce Vita in Cow’s Lane, to notice that the hair studio across the street is called Gillian Edgeworth.

Today was Mothering Sunay, and back in Christ Church Cathedral, as I led the intercession at Choral Evensong, I remembered with thanks Mary, the Virgin Mother, Mother Church, mothers, and those who gave a mother’s love to many who were not their children.

The settings for the Preces and Responses were by Bernard Rose (1916-1996), and it was so appropriate that they were sung by Jean Finch as cantor – for he was once her tutor when she was an undergraduate at Magdalen College, Oxford.

I had coffee afterwards in Toffoli, a sweet little botega in Castle Street, half way between Christ Church Cathedral, Dublin, and Dublin Castle.

The tide was out at the Burrow and the sun was still shining this evening in Portrane (Photograph: Patrick Comerford, 2011)

But the rain had held off all afternoon, and with the extra hours in these evenings it was good to head out to Portrane, to visit my cousin Mary Lynders at The Quay and to take a walk on the beach at the Burrow.

The sea was calm and deep blue, the views were sharp and clear, the tide was out and the sand ranged in colour from deep brown through yellow and bright gold, folded in ripples and intersected by tiny rivulets of remaining water.

It was a calm evening as the sun began to set – a calm that was interrupted only by one lonely helicopter above, searching for the two missing fishermen from Skerries. Keep their families in your prayers too.
Posted by Patrick Comerford at 22:21 No comments:

Affirming Catholicism has announced the details of its 2011 residential conference at Liverpool Hope University from 29 June to 1 July on the theme, “Praying the Kingdom.”

I have been invited to lead a workshop on “Prayer, mission and building the kingdom: the work of USPG.”

Announcing the programme, the conference organisers said: “We live in a world which desperately needs the transformative power of the kingdom. But working to bring about social justice, to alleviate debt, to preserve the environment are not simply a matter of social action: they are integral to the mission of the church and they must be rooted in prayer.”

They say the conference brings together speakers and workshop leaders from across the Anglican Communion and from sister churches to reflect on the theme of prayer and the mission of the church through keynote addresses, workshops, worship and prayer.

The opening service at 5.30 p.m. on Wednesday 29 June will include a welcome address by Bishop James Jones of Liverpool. The keynote speakers are key thinkers and actors in the life of the church.

Bishop Stephen Cottrell of Chelmsford speaks on Wednesday evening on “Be careful what you pray for: the psalms, the kingdom and the struggle for justice.” Bishop Cottrell is a well known writer and speaker on evangelism, spirituality and catechesis. He was a founder member of Springboard, the Archbishop of Canterbury’s evangelism team. His best-selling book, How to Pray (London: Church House Publishing) has recently been re-issued.

The writer of prayer and poetry, Janet Morley, will speak on Thursday morning [30 June] on: “ ‘It is dangerous to read newspapers’ (Margaret Atwood): risk, hope and the practice of praying the kingdom.” She is the author of several books of prayers, including All Desires Known and Bread of Tomorrow – praying with the world’s poor. She is currently preparing for SPCK an anthology of poems, with reflective commentaries, for use in Lent and Eastertide.

On Thursday afternoon, the Revd Professor Sarah Coakley speaks on: “Healing the Broken Body: Prayer and the Overcoming of Division.” Dr Coakley is the Norris-Hulse Professor of Divinity, and a Fellow of Murray-Edwards (previously New College) at the University of Cambridge. She has taught at Lancaster, Oxford, and Harvard, and has worked and written on the relationship between prayer and leadership.

On Friday morning [1 July], Bishop Musonda Trevor Mwamba of Botswana speaks on: “Dancing in a rainbow of prayer: the magical journey to wholeness.” Bishop Trevor Mwamba is the best-selling author of Dancing Sermons. He also appears as himself in a number of Alexander McCall Smith’s bestselling books, The No.1 Ladies’ Detective Agency, as well as in the movie. He was a priest in Notting Hill, London, and his native Zambia before moving to Botswana.

I have been asked to lead one of the workshops at the conference in Liverpool Hope University. These workshops run on Thursday morning and afternoon, and I am leading one on: “Prayer, mission and building the kingdom: the work of USPG.”

The other workshop leaders and themes include:

● The Revd Dr Mark Chapman, Vice-Principal of Ripon College Cuddesdon, Oxford, Reader in Modern Theology in the University of Oxford, and Visiting Professor at Oxford Brookes University: “The Kingdom and the Big Society: responding to the current crisis.”

● The Revd Canon Cynthia Dowdle, Vicar of Saint Mary’s, Knowsley, Prescot, and Dean of Women’s Ministry in the Diocese of Liverpool: “Mission and multi-tasking: the challenge of growth in multi-parish benefices.”

● The Revd Dr Helen-Ann Hartley, Director of Biblical Studies and Lecturer in New Testament, Ripon College Cuddesdon, Oxford,: “The kingdom of God is here but is not yet: signs of the kingdom in the New Testament.”

● The Revd Canon Robert Jones, Diocesan Director of Training and Development, the Diocese of Worcester: “Praying the liturgy through music from the world Church.”

● The Revd Ian Mobsby, an Anglican priest working full-time with Moot in the Diocese of London, an associate Missioner of the Archbishops’ Fresh Expressions Team, and an associate lecturer at a number of ordination training institutes: “Be(com)ing: catholic and contemplative Fresh Expressions.”

● The Revd Regan O’Callaghan, a New Zealand-born artist and icon writer now living in London: “Images of the kingdom? Icons and the spiritual journey.”

Speakers are to be confirmed for workshops on “Proclaiming the Kingdom in the current situation of the Anglican Communion,” “The Church: hindrance or help in the vision of transformation?” and “The Iona Community”

The Closing Eucharist will be celebrated in the Lady Chapel at Liverpool Cathedral, when Professor Coakley is the preacher.

This promises to be rich and stimulating conference. The cost of the conference is £245 per delegate, and bursaries are being offered for theology students. More details are available at:

Canon Patrick Comerford is Director of Spiritual Formation, the Church of Ireland Theological Institute, a canon of Christ Church Cathedral, Dublin, and a director of USPG Ireland and a member of the Council of USPG
Posted by Patrick Comerford at 06:30 No comments: