Camberley House, Churchtown: the home of
a revolutionary widow and a former school 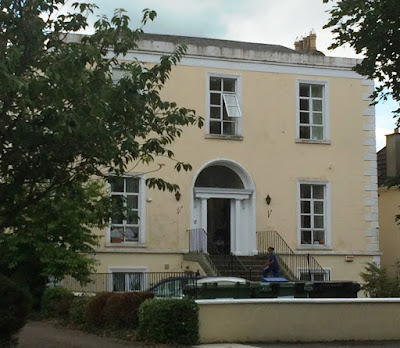 In my walks around the Churchtown and Rathgar area in recent weeks, I was surprised to see for the first time Camberley House at 78 Upper Churchtown Road. This house, which was also known in the past as Inish More and as Inish Ealga, is an elegant Georgian house, with all the appearances of a country house, and the surprise on seeing it for the first time is added to by its setting in the midst of modern housing estates, behind SuperValu and other shops in this part of Churchtown.

A house on this site is recorded as early as 1768 when the house was sold by Francis Minchin to James Towers. At one time, the house may have been known as Barn Elms, a name that is now associated with house further west along Upper Churchtown Road.

The present house does not date back that far, but was probably built in the first decade of the 19th century, when it replaced an earlier house on the same site.

The Minchin family also had a house at Woodville, Co Wexford, and remained in the Churchtown and Dundrum area in the 19th century. The parish records of Taney Parish note the burials of Anne Minchin (1819), William Minchin (1825), and their father William Augustus Minchin (1841).

The name of Camberley House, which was on the old gate piers, seemingly does not appear in the official records. So where did the name come from?

Camberley is a town in Surrey, 50 km south-west of central London, close to Surrey’s borders with Hampshire and Berkshire, and the main town in the borough of Surrey Heath. However, Camberley did not exist before the 19th century, and the area for long was known either as Bagshot or Frimley Heath. A new town grew up around the Royal Military College, which was established there in 1812 and would later become the Royal Military Academy, Sandhurst. By 1831, the new town was known as York Town, but it later took a new name from the Cambridge Hotel, built in the mid-19th century.

The town was known unofficially as Cambridgetown, but had to be renamed renamed Camberley in 1877 at the request of the GPO to avoid confusion with Cambridge. It is a composite name: Cam- or Camb- is taken from the original name of Cambridgetown; -ber- means river, because there are many rivers in the area; and -ley, meaning a clearing in a woodland, is a common ending for placeames in the area.

The Ceannt family seems to have acquired the property from the O’Neills around 1915. Eamon Ceannt was one of the signatories of the 1916 Proclamation and a rebel leader in the South Dublin Union on Easter Monday 1916. He was executed in Kilmainham Gaol on 8 May 1916.

When the Ceannt family moved into the house, they used both names of Inish More and Inish Ealga for the house. The name Inish Ealga was used in Irish literature as a type of poetic name for a Gaelic Ireland, “the Island of the Brave.”

For many years, the house was the home of his widow, Aine Ceannt. She was born Frances Mary O’Brennan and in 1905 she married Eamon Ceannt. Four years later, in 1909, she changed her name to Áine b. É. Ceannt. Áine was a sister of the prominent republican activist Elizabeth (‘Lily’) O’Brennan and the playwright Kathleen O’Brennan, and the three sisters were at the centre of the women’s republican movement in the 1910s and the 1930s.

She was vice-president of Cumann na mBan from 1917 to 1925, was a Sinn Fein magistrate during the War of Independence and was later jailed for a year during the Civil War as an anti-treaty activist. She went on to be a co-founder of the Irish Red Cross. From the 1930s, Aine Ceannt lived at Inis Mor, and in the 1940s, she commissioned the building of a substantial gate lodge for the property.

Shortly after the end of World War II, Churchtown started to become the bustling suburb we know today. It soon became obvious that needs in this developing area included schools. Archbishop John Charles McQuaid asked the Notre Dame Sisters to look after the needs of girls in the area and the De La Salle Brothers, who were already based in the area, to do the same for boys.

Both orders looked at various properties in the area. The nuns bought Fernbank, a large house on Upper Churchtown Road near the original turn-off for Dundrum, from a Quaker family. The De La Salle Brothers then started investigating the possibility of buying a neighbouring house, Woodstock, from the Switzer family, who owned Switzer’s shop in Grafton Street. However, Archbishop McQuaid thought that it would be unseemly for the two schools to be so close and that this would create a scandal. He suggested the De La Sale Brothers should look for another site for the boys’ school.

The brothers then began negotiating with Aine Ceannt, and eventually they bought Inish More House and most of the grounds. Aine Ceannt and her son Ronan moved to the extended Gate Lodge, retaining part of the grounds for her own use, and a new gateway was built to give access to the new school. The school was blessed and officially opened by Archbishop McQuaid in 1952.

In the years that followed, however, the house could not cope with the increasing numbers at the school, and the present college buildings were erected on the site of the former Landscape House. In 1957, the secondary school moved to its present location further west on Upper Churchtown Road and the preparatory school became a separate entity at Camberley House. Around the same time, the brothers opened a primary school nearby on Whitehall Road.

When the house was sold in the mid-1990s, the new owners renovated it from top to bottom, and it became a four-bedroom detached property with floor space totalling 2,422 sq ft. The accommodation included a reception hall with the original terrazzo floor, a kitchen with a range of maple units, and a dining room with a sandstone fireplace, oak floor and double doors leading out to the rear garden. The house also had a study/library, a large sitting room and lounge. Upstairs there were four bedrooms, including one with its own dressing room and study.

The house was sold once again in 2014, and today this three-storey, 19th century detached house has been split into six two-bedroom apartments, and offers temporary emergency accommodation for families. Referrals come to Sophia through the Homeless Executive. The team consists of a project manager, a support worker and three shift attendants. Staff are present throughout the week, and each tenant has a keyworker and there is a holistic care plan for all tenants. Practical support is also offered in a range of areas such as home management, budgeting, shopping and cooking.

It seems to be an ideal use for an elegant house like this and with this history.