A captivating cathedral concert
and a derelict country house 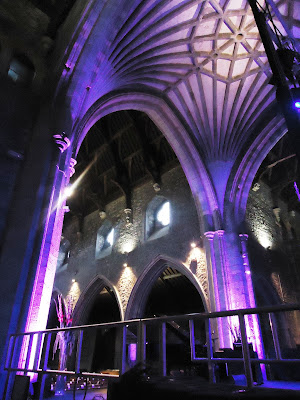 I was in Kilkenny last night for the opening concert of the Kilkenny Arts Festival in Saint Canice’s Cathedral – thanks to an invitation from the Dean, the Very Revd Katharine Poulton.

The cathedral was packed for the concert by Neil Hannon (aka The Divine Comedy), who wrote the theme music for both Father Ted and The IT Crowd, and the recent Dr Who theme.

After his breakthrough single, ‘Something for the Weekend,’ he was hailed as the Noël Coward of Britpop. But perhaps he is best known as the creator and frontman of the chamber pop group, The Divine Comedy. The band’s official website says, “The Divine Comedy is Neil Hannon,” he has told an interviewer: “The Divine Comedy will always be my band because ... I thought of it first!”

He has recorded a string of pop symphonies infused with lyrical intelligence and delivered with his deep, rich vocals. Over the years he’s performed in a range of magnificent venues from the Folies Bergère and the Royal Albert Hallto York Minster.

Recently, he has also worked with Thomas Walsh from Pugwash to create a cricket-themed concept album, The Duckworth Lewis Method. 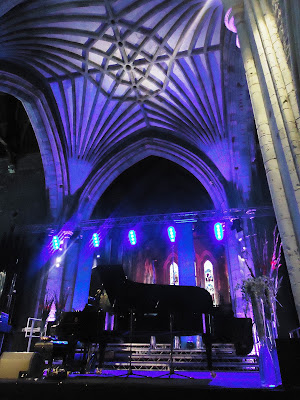 The Adelaide-born singer and multi-instrumentalist Margie Lewis was the supporting act last night. She was trained as a classical violinist and jazz vocalist, but experiments with a surprising combination of sounds, using a loop station, zither, violin and her own recordings of her own voice.

She was charmed – if not overwhelmed – by the grandeur and the setting of this gothic cathedral. But then, so too was everyone else in the audience last night.

It was after 11.30 when we spilled out of the cathedral and headed back on the road to Dublin.

We had lunch in Avoca in Rathcoole as we were leaving Dublin late in the afternoon.

On the way through the gold and green fields of Kildare, Carlow and Kilkenny, it was a busy evening in the August sunshine, with combine harvesters still at work late into the day. 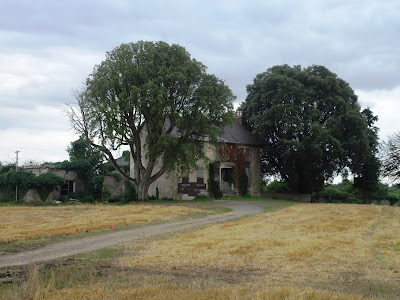 We stopped briefly on the outskirts of Kilkenny to photograph Hebron House, a once elegant house that is now in a sad state of neglect – an eyesore that I imagine most people pass on their way in out of Kilkenny without even noticing.

Hebron House is a detached, five-bay two-storey over part-raised basement country house with a dormer attic. It is set back from the Hebron Road roundabout in its own grounds, but originally this was a carefully selected site spanning the Pococke River, with grass banks to river.

The pitched slate roof has clay ridge tiles, there are rendered chimney stacks, and there are painted fine rough-cast lime-rendered walls over random squared rubble limestone construction with a stringcourse to the basement.

The square-headed window openings have cut-limestone sills, and concealed red brick dressings, including voussoirs. But the windows were also blocked-up, post-2003, with concrete block infill.

The two-storey outbuildings date from about 1800, are also falling into dilapidation. The house once had a walled garden, dating from about 1800, but I imagine this too has been lost, and the grounds are now unkempt.

Older descriptions of the house in the past also mention a three-arch rubble limestone rustic bridge built over the river around 1750. It had squared rubble limestone coping to the parapets and a series of three elliptical arches with dressed limestone voussoirs, and rubble limestone soffits. But I wonder whether this too has gone with the realignment of roads and the building of new roundabouts.

For most of the 18th century, Hebron House was owned by the Helsham family, who also owned a town house in Patrick Street, Kilkenny. At different times, their tenants included the Bambrick, Brownrigg, Watters, Enery and Jones families. By the 1850s, it was owned by the Murphy family, and included 151 acres. Later families living there included the Mansfield family.

The house was closed in 1998, and it is said locally that the interior fittings, including the fireplaces, were stripped out before the door and windows were blocked up about ten years.

This is a well-appointed, classically-proportioned, middle-size country that has been left to fall into a state of dilapidation and disrepair in the last decade, following a long period of neglect. But Hebron House is still an important landmark that enhances the rural landscape in this area east of Kilkenny city. 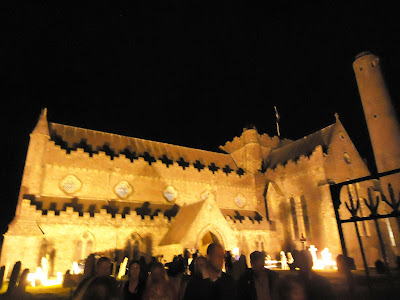 Posted by Patrick Comerford at 10:50 6 comments: