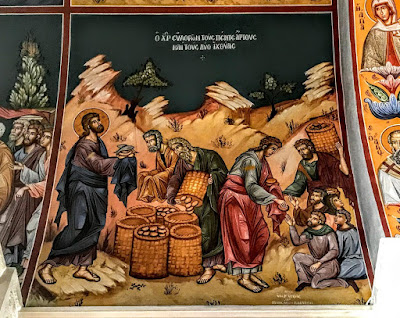 The miracle of the loaves and fishes in a fresco in Analipsi Church in Georgioupoli, Crete … there are only two fish, but the loaves of bread have already been multiplied (Photograph: Patrick Comerford)

We pray for the universal Church of God;

We pray for the bishops of the Church of Ireland
and the staff of the diocese and the Representative Church Body,
who have continued to work throughout this crisis.

We pray for our own bishop, Kenneth.

In the Anglican Cycle of Prayer,
we pray for the new Province of Alexandria,
created from the former
Diocese of Egypt with North Africa and the Horn of Africa
in the Episcopal Church of Jerusalem and the Middle East.

Throughout the Church of Ireland this month,
we pray for the Diocese of Dublin and Glendalough, for Archbishop Michael Jackson,
and for the people and priests of the diocese.

In the Diocesan Cycle of Prayer,
we pray for the vulnerable and anxious,
that they may experience the peace of Christ.

We pray for our neighbouring churches and parishes,
and pray for the Revd Bernie Daly as she prepares to
come to Saint Mary’s Cathedral, Limerick, as Dean’s Vicar.

‘Show us your marvellous loving-kindness,
O Saviour of those who take refuge at your right hand’ (Psalm 17: 7)

We pray for the nations of the world:

We pray for our own government and all governments
that have tried to find ways of dealing with this crisis,
thanking God for the blessings
of wise decision makers and advisers …

We pray for the local community:

In this time, known in the Church as Ordinary Time,
we give thanks for all the ordinary things
we have taken for granted.

‘As for us, we shall see your face in righteousness;
when we awake and behold your likeness’ (Psalm 17: 16)

We pray those in need:

We pray for those we have offered to pray for …

We pray for all who grieve and mourn at this time …
We remember, and give thanks for, the faithful departed …
including the Revd Canon Charles F Slagle …
We pray for the Casey and Byrne families
as they think about what should have been a special time …
may their families find comfort and support in the prayers of friends …
May their memories be a blessing to us …

As we learn to live with Covid-19,
we pray for its continuing suppression in our communities,
and we pray in these words in this diocese throughout this month:

Lord God, from whom all health and healing flows,
we give you thanks for the present low level
of Covid-19 infection in Ireland.

May your Holy Spirit inspire public health officials
to give sound advice,
guide our government to make wise decisions,
and show us all how to behave for the common good,
so that infection rates do not increase again
as our country reopens.
We ask this in the name of your Son, our Saviour, Jesus Christ.
Amen. 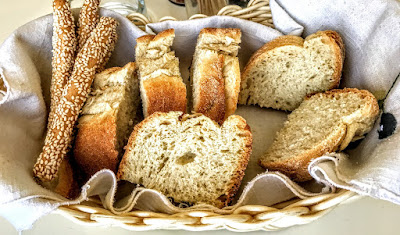 A variety of bread gathered in a basket in a restaurant in Panormos, near Rethymnon (Photograph: Patrick Comerford)

Christ seems to be having a tough time with the disciples in this morning’s Gospel reading. It is almost as though he has to wrestle with them to get them to share their five loaves and two fish with the multitude.

I cannot imagine how we would cope with thousands of people turning up, unexpected and uninvited, at church – even outside pandemic times – wanting to hear the Good News and share the Eucharist with us.

Would we too panic, and want to send them away, saying we do not have enough to share with them, send them back to their own villages?

It is almost impossible to imagine the scale of generosity involved in this Gospel story. By beginning to share those five loaves and two fish, the disciples eventually feed a multitude.

How many do you think were fed that evening?

If there were 5,000 men there that day, and one woman with each man and two children with each couple, then we are talking about the feeding of 20,000 people, or the population of a town like Wexford, Celbridge or Mullingar.

Professor Colin Humphreys of Selwyn College, Cambridge, challenges many early calculations and now suggests the number of men, women and children at the Exodus was about 20,000. So, in feeding the multitude, Christ is bringing all our wanderings, all our journeys, all our searches for God, to their fulfilment when we meet him in sharing the good news and break bread together.

But Christ only does this after almost wrestling with the disciples, getting them to share what meagre food they have brought along with them. And then, in sharing, we see Christ face-to-face, we see God face-to-face, find ourselves in God’s presence.

In the first reading (Genesis 32: 22-31), does Jacob in his sleep see God’s face? Does he find himself in the presence of God?

Jacob is on his way back to Canaan that evening, and he spends the night alone on a riverside. There he meets a ‘man’ who wrestles with him until daybreak. In the end, Jacob is given the name ‘Israel’ and blessed, while the ‘man’ refuses to give his own name. Jacob then names the place where they wrestle Penuel (פְּנוּאֵל), meaning ‘face of God’ or ‘facing God.’

Jacob is a foundational figure in the Biblical stories. But this does not mean he is a great leader. He is a follower, a bit of a sneak, all hinted at in the pronunciation of his name. He lies to his father Isaac, he is manipulated by his mother Rebecca, he steals his brother Esau’s blessing, he runs for his life, and then – as we heard last week – he ends up under the thumb of Laban, his father-in-law, for 14 years.

Now Jacob has not only two wives – Leah and Rachel – but he has accumulated many possessions, as well as having children and other women in his family grouping. He is on his way to visit his estranged brother Esau, hoping to be reconciled with him. He is crossing the Jabbok, the boundary into Canaan, we might say he is crossing ‘his Rubicon.’

But, what man, still fearing the vengeance of his brother, would send the women and children in his family ahead of himself, unprotected, while he stays behind on his own?

Who wrestles with Jacob?

The Hebrew text says Jacob wrestles with a ‘man’ (אִישׁ). But later Jacob identifies this ‘man’ with God, Elohim. Hosea confusingly says that Jacob wrestled both with God and with the angel (Hosea 12: 3-4). Later Jewish versions say Jacob had ‘seen the Angel of the Lord face to face’ (Targum of Onkelos, Targum of Palestine).

Some commentaries suggest Jacob has seen ‘God face to face’ or has seen the ‘Face of God.’ Others suggest an encounter with the pre-existent, eternal Christ. The Zohar describes Jacob’s struggle with the angel as symbolic of humanity’s struggle with our darker side.

The writer and scholar Rabbi Shmuel Klitsner says this episode opens us up to those things that keep us awake at night. ‘The things that you’re wrestling with are the things you’ve relegated to darkness. You can wrestle with things in the dark, but when the rise of dawn comes, that enlightenment is the most threatening part of this,’ he said last year. ‘Our ways of prevaricating, of lying to ourselves or deceiving others don’t withstand the light of day.’

After he prevails against the ‘angel’ and receives his desired blessing, Jacob is injured at the hip. The sun rises, and he is given a new name, Israel, which means ‘he who wrestles with God.’ The new name reflects not only his personal struggle, but the destiny of an entire people, says Rabbi Klitsner.

A new name, Israel, signifies a new stage in Jacob’s life, and gives meaning to his future. Jacob is no longer cunning, he now has a mission, he is now divinely commissioned and he is the father of God’s chosen people. Just as he has struggled with God, so does the nation. He is now protected by God, and God’s people now have a role in our unfolding story of salvation.

Sometimes I think Jacob – in all his weaknesses, in all his mistakes and blunders, with all his doubts and injuries, with his wounded ego – is a mirror of many of my own spiritual struggles. Sometimes I think the disciples – in all their weaknesses, with all their doubts and injured egos, as they wrestle with their consciences and with Christ about sharing the little meagre gifts they have – mirror many of my own struggles with God.

For, in all our struggles, even when we think we are turned away from God, God’s face is looking at us, and God calls us by name.

When we invite people into the Church, we have so much to share – much more that the meagre amount we may think we have to share.

As we hear the Good News and enjoy the party, share the Eucharist, we can find more than our imagination allows us to imagine, and, as our opening hymn promises, we may even see God face-to-face. 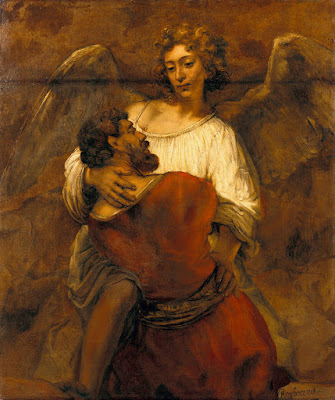 Jacob Wrestling with the Angel, Rembrandt, in the Rijksmuseum, Amsterdam (Wikimedia/Rijksmuseum)

13 Now when Jesus heard this, he withdrew from there in a boat to a deserted place by himself. But when the crowds heard it, they followed him on foot from the towns. 14 When he went ashore, he saw a great crowd; and he had compassion for them and cured their sick. 15 When it was evening, the disciples came to him and said, ‘This is a deserted place, and the hour is now late; send the crowds away so that they may go into the villages and buy food for themselves.’ 16 Jesus said to them, ‘They need not go away; you give them something to eat.’ 17 They replied, ‘We have nothing here but five loaves and two fish.’ 18 And he said, ‘Bring them here to me.’ 19 Then he ordered the crowds to sit down on the grass. Taking the five loaves and the two fish, he looked up to heaven, and blessed and broke the loaves, and gave them to the disciples, and the disciples gave them to the crowds. 20 And all ate and were filled; and they took up what was left over of the broken pieces, twelve baskets full. 21 And those who ate were about five thousand men, besides women and children. 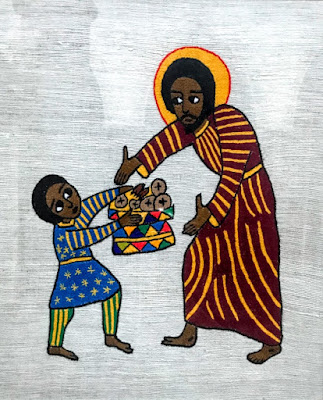 Strengthen for service, Lord,
the hands that holy things have taken;
may the ears which have heard your word
be deaf to clamour and dispute;
may the tongues which have sung your praise be free from deceit;
may the eyes which have seen the tokens of your love
shine with the light of hope;
and may the bodies which have been fed with your body
be refreshed with the fullness of your life;
glory to you for ever. 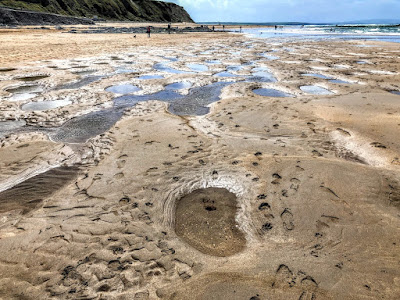 ‘My footsteps hold fast in the ways of your commandments’ (Psalm 17: 5) … footsteps in the sand at Ballybunion (Photograph: Patrick Comerford, 2020)