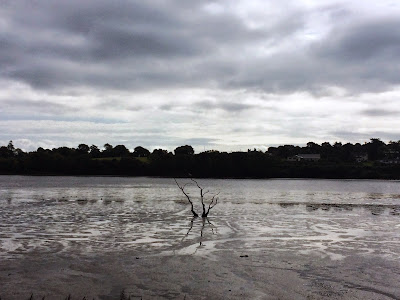 The mouth of the River Slaney at the Ferrycarrig Hotel, near Wexford, this morning (Photograph: Patrick Comerford, 2014)

I spent most of the day [6 September 2014] on the banks of the River Slaney, from the mouth of the Slaney Estuary at Wexford Harbour and the Quays along the front of Wexford Town, to Bunclody in north Co Wexford.

I was in Saint Edan’s Cathedral, Ferns, last night for the ordination of the Revd Caroline Farrar to the priesthood by Bishop Michael Burrows.

Two of us travelled down to Wexford in the early afternoon and had a late lunch in La Dloce Vita in Trimmer’s Lane, near Selksar Abbey. Although we are well into September, it was still warm enough to sit outside in Trimmer’s Lane as we had lunch in this authentic Italian restaurant run by Roberto and Celine Pons and their family.

We checked into the Ferrycarrig Hotel, three miles outside Wexford town, before returning to Ferns for Caroline’s ordination. 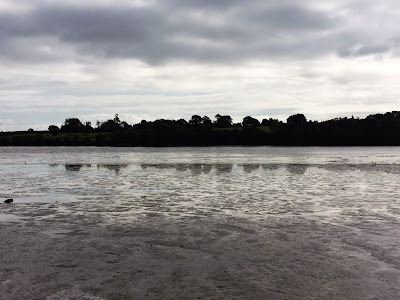 All bedrooms in the Ferrycarrig Hotel look out onto the River Slaney (Photograph: Patrick Comerford, 2014)

All the 102 bedrooms in the hotel look out onto the river and our room had a balcony with a dramatic panoramic view across the river estuary.

We sat on our balcony late into the night, gazing in wonder at the reflections on the night waters. I awoke this morning to the sound of birds waking on the river and the sight of a heron wading through the low tide.

In the tranquillity created by the morning mists, it is difficult to recall that the mouth of the river at this point once had great strategic significance, and that the first castle at Ferrycarrig was built by Robert FitzStephen to guard passage by river and road shortly after the Anglo-Normans arrived in Ireland in the late 12th century.

The present ruins represent a later castle built by the Roche family in the 15th century as a defence for the river ferry and other craft on the Slaney. 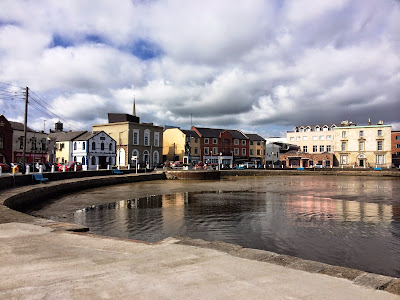 The Crescent on the Quays in Wexford this afternoon (Photograph: Patrick Comerford, 2014)

Later on the morning, we returned to Wexford town, parked near the “North Station” and walked in the autumn sunshine along the Quay between the railway line and the trawlers.

The plaza along the Quay replaced the old, narrower “woodenworks,” once synonymous with the town, in the 1990s. It and now provides Wexford with a beautiful waterfront that is a pleasant amenity and a place to stroll and watch the bustle of the town and the river.

From the Crescent, we walked out along the breakwaters, and in the bright sunshine had views to the west of Wexford Bridge, to the north to Raven Point, and to the south of Rosslare. 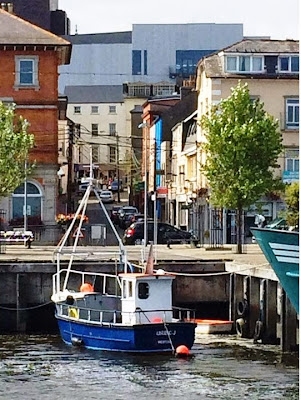 After strolling back up Henrietta Street, Wexford, along South Main Street, North Main Street and up Rowe Street, we stepped into High Street, where I lived in the early and mid-1970s, when I worked with the Wexford People. In those days, it was only a 60-second commute on foot to work from my top floor, two-roomed flat through the printing works to the editorial offices at the back of the old Mechanics Institute building.

The former entrance to the Wexford People and the old printing works were demolished in the last decade to make way for the new Wexford Opera House.

The original Theatre Royal in High Street opened in January 1832. It closed its doors in 2006, and a major rebuilding project took only two years to complete. The new Wexford Opera House opened its doors on 5 September 2008, and changed the skyline of Wexford. It is Ireland’s first custom-built Opera House, and hosts a multitude of events all year round, including theatre, dance and concerts as well as the Wexford Festival Opera. 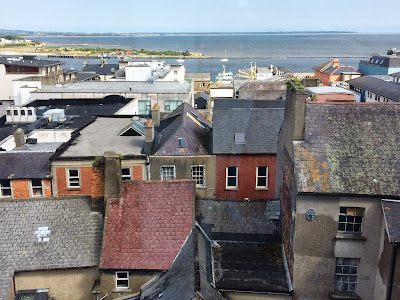 Looking across Wexford’s narrow streets and out across the harbour from the Stable Diet Café in Wexford Opera House (Photograph: Patrick Comerford, 2014)

We had lunch in the Stable Diet Café on third floor, with view across the town and the harbour. The café is run by a privately-owned food company with the philosophy “that nature knows best.”

As we were finishing lunch, I realised that below me were the now vacant and apparently abandoned editorial offices of the Wexford People.

Later, we continued our stroll through the streets of Wexford before driving back to Ferrycarrig and then along the banks of the Slaney through Oylgate, Edermine, and Enniscorthy to Scarawalsh, half-way between Enniscorthy and Ferns. 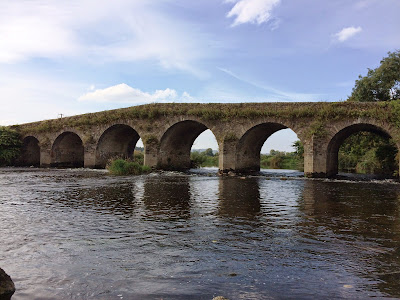 Scarawalsh Bridge … a six-arch bridge built to span the river in the 1790s (Photograph: Patrick Comerford, 2014)

Scarawalsh Bridge is a six-arch humpback road bridge spanning the River Slaney. It was built by the Oriel Brothers of Hampshire in the 1790s, to replace an earlier bridge from the 1770s or 1780s that had been swept away in floods on the river in 1787. The bridge was by-passed in the 1970s, but it remains an important example of late 18th-century civil engineering for its beauty and its traditional construction.
We continued along the east bank of the river as far as Clohamon, and then crossed the river, and continued north to Bunclody. The narrow roads were busy with farm traffic, and fields were green and golden as farmers made the best of the opportunities provided by the warm sunshine, whether this is late summer or early autumn, to finish baling the hay.

The green and golden landscapes continued to decorate the roadside views as we continued through Bunclody towards Carlow, and joined the motorway back to Dublin.
How truly we sang the words of the processional hymn last night in Ferns Cathedral:

Daily doth the almighty Giver
bounteous gifts on us bestow;
his desire our soul delighteth,
pleasure leads us where we go.
Love doth stand
at his hand;
joy doth wait on his command. 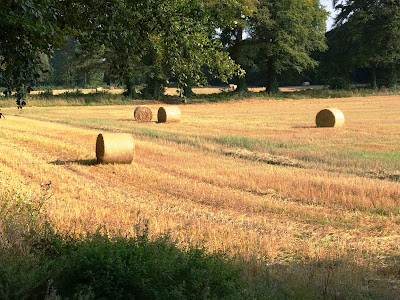 Posted by Patrick Comerford at 22:26 No comments: