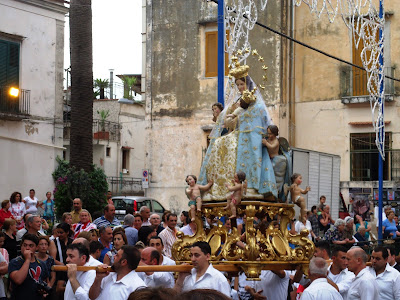 The statue of the Madonna is carried shoulder-high to applause from the church in Seiano (Photograph: Patrick Comerford, 2013)

In twos and threes, it seems a large number of people in my tour group took the Cicumvesuviana local rail link into Sorrento on Sunday [7 July 2013], and spent a few hours strolling through the streets of the old town and around its harbours.

The Anglican church in Naples also uses the Roman Catholic Cathedral in Sorrento on Sunday afternoons, and I had planned to go there. But a new priest is taking up an appointment later this month, and so instead I went to church this morning in the local parish church of Saint Mark the Evangelist in Seiano.

After an hour or two in the sunshine at the hotel pool, two of us caught the train into Sorrento. From Piazza Tasso, we walked down the steep gorge that divides the town to the Marina Piccola (small harbour) for lunch in La Scogliera, looking out at the ferries and boats leaving for Naples, Capri and the small islands in the bay.

A small storm blew up with some thunder and a little lightning. None of this deterred those who were determined to make the most of their holiday in this part of southern Italy. But we wondered whether the crossing to Capri the next day would be calm. 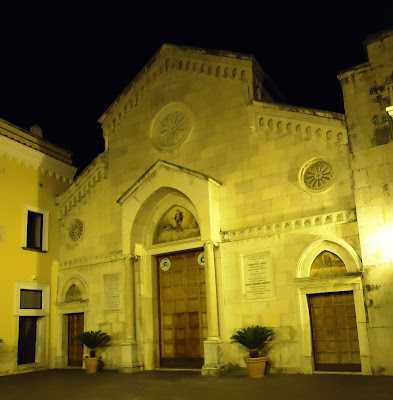 After lunch, we caught a bus back up through the deep gorge to the Piazza Tasso, and strolled along the Corso Italia, Sorrento’s main shopping street, with its arched side passages, hidden palazzos and gothic mansions. As we passed the bars and cafés it was possible to judge from the roars and shouts in each how Andy Murray was progressing at Wimbledon. 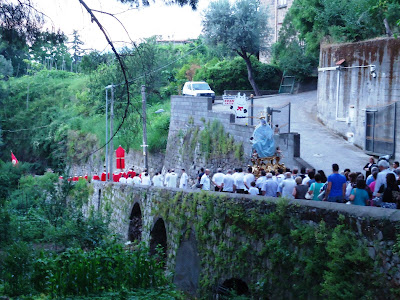 The procession makes its way through the back streets of Seiano on Sunday evening (Photograph: Patrick Comerford, 2013)

We returned to Seiano in the evening, in time to watch a procession of a locally venerated statue of the Virgin Mary through the village streets.

As the statue was brought out of Saint Mark’s Church, the bells pealed out, the waiting crowd burst into applause and the local brass band struck up. Robed men in the red capes and white albs of the local archconfraternity and burial society preceded the parish priest in prayer and the burly villagers who carried the statue on their shoulders.

As the procession moved through the streets of Seiano, firecrackers were let off, confetti poppers were burst, petals were strewn along the route. Flags of white and gold and crimson banners were draped from balconies, and the band played out as the priest led those in the procession in decade-after-decade of the rosary. 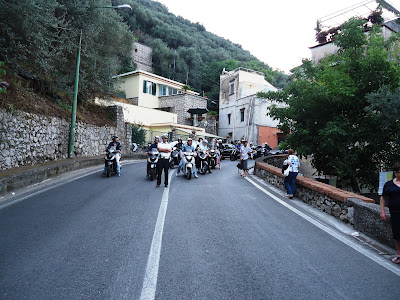 Police block traffic on the road between Sorrento and Naples to allow the procession to criss-cross through the village streets (Photograph: Patrick Comerford, 2013)

There is only main road along the coast to Sorrento, but the local police were not shy about holding back the flow of traffic in each direction to allow the procession to criss-cross unimpeded from one side of the village to the other time and again.

Eventually, we left the procession and Seiano behind us and caught the bus back into Sorrento for a late supper at Fauno, looking out at the passeggiatta in Piazza Tasso – another form of Sunday folk ritual.

It was after midnight when we got back to the hotel, where yet another wedding party was dancing late into the night.

Posted by Patrick Comerford at 18:10 No comments: