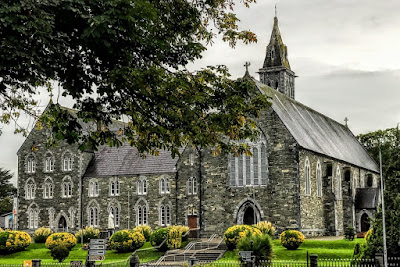 A short visit to a church
with Pugin’s fingerprints 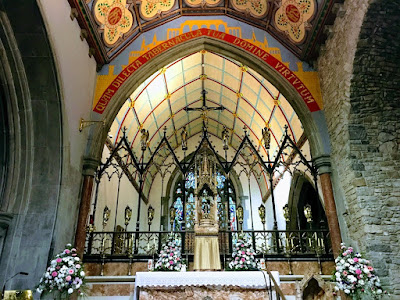 One of my favourite churches in Ireland, undoubtedly, is the Holy Trinity Abbey Church, now the Roman Catholic parish church in the centre of Adare, Co Limerick. Six of us were waiting in Adare on Wednesday morning [20 September 2017] to begin a tour of the Dingle Peninsula, and as a group we found time for an early morning visit to this church.

Although, there were about 20 Trinitarian foundations in England and Scotland, Holy Trinity Abbey in Adare is the only example of a church of the Trinitarian order in Ireland. The Trinitarian Order was founded in 1198, when Pope Innocent III was in office. The order was founded by Saint John de Matha and Saint Felix de Valois, a grandson of the King of France. The order engaged in ransoming and freeing Christian captives during the Crusades.

Saint James was the patron saint of the abbey. The foundation date of Trinitarian order at Adare is unknown. But there was a church here by 1226, when Geoffrey de Marisco received a grant to hold a fair at Adare during the eight days following the feast of Saint James.

Geoffrey de Marisco ended his days in exile in France, and John FitzThomas Fitzgerald, 1st Earl of Kildare, endowed the abbey in the late 13th century.

According to a local tradition, there were plans to turn the ruined monastery as a market house. But one day in 1811, as the first Earl of Dunraven was passing by, he stopped for a few minutes gazing at the ruins. As he moved away he was heard to remark, ‘I never will allow it to be a den of thieves.’ He proceeded to restore the ruins as a parish church.

His son, Wyndham Quin (1782-1850), 2nd Earl of Dunraven, gave the ruined abbey to the Roman Catholic parish of Adare in 1824 and began a programme of restoration that was continued by his family.

The abbey was renovated and enlarged in 1852 by Edwin Richard Wyndham-Quin (1812-1871), 3rd Earl of Dunraven, who engaged English architect Philip Charles Hardwick (1820-1890) for the task, while taking care to maintain the fabric of the church.

However, this work may have been carried out by AWN Pugin when he took over from Hardwick in restoration of Adare Abbey. Phoebe Stanton, who is an authority on AWN Pugin, says he ‘added a new roof and stained-glass windows to the village church, which he probably also totally restored.’ Roderick O'Donnell says this work was for former Trinitarian Abbey. In addition, the encaustic tiles in the sanctuary are further evidence of any work by Pugin on this church. 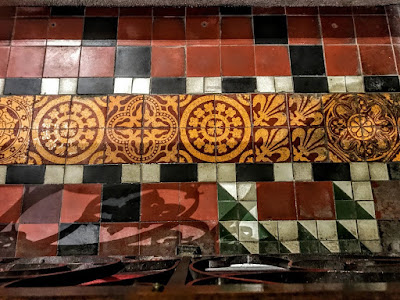 Encaustic tiles in the sanctuary of the restored church in Adare (Photograph: Patrick Comerford, 2017)

The abbey was radically extended in 1856 in a building programme that lasted until 1884.

The 3rd Earl of Dunraven was an antiquarian and historian, who had become a Roman Catholic. He had the nave lengthened by 12 ft, the porch erected, and the Lady Chapel built, at the east end. One of the features of this enlargement is a bronze screen designed by AWN Pugin. This separates the Lady Chapel from the Sanctuary and was the gift of Windham Thomas Quin, 4th Earl of Dunraven, in 1884.

The church we see today is a fusion of the mediaeval remains and 19th century Gothic Revival architecture. For example, during the 19th century restoration, care was taken to preserve the two piscinas, one in the nave, the other in the chancel of the original church. There, the sacred vessels were cleaned after the Eucharist.

The mediaeval features include the tower, nave and part of the choir, while the timber roofs, the sacristy and the Lady Chapel were designed by Hardwick. There is a restored columbarium or dovecote beside the church, and nearby Our Lady’s Abbey School, originally a convent of the Sisters of Mercy, incorporates part of the original cloister.

A modern bronze sculpture in the church, ‘The Way,’ was designed by John Blakeley, and depicts the hill in Jerusalem. The centrepiece of the sculpture is a five-million-year-old piece of marble from Jerusalem.

The Stations of the Cross are the work of Meyers of Munich, commissioned in 1884 by the then Parish Priest, Father John Stanislaus Flanagan, who died in 1905 and is buried in front of the main altar.

Our visit on Wednesday morning to this church was brief, and we had little time to do anything more than say or morning prayers and delight in the beauty that enfolded us. Within an hour or two we were in Killarney, and from there we moved on to Inch Strand, Dingle, and the end of Ireland and of Europe at Ventry and Dunquin. 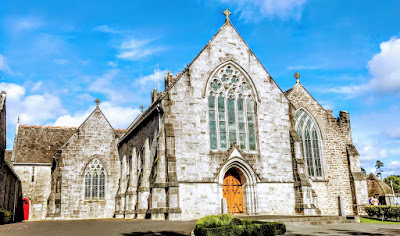