‘The darkness shines as day …
the light is about me’ 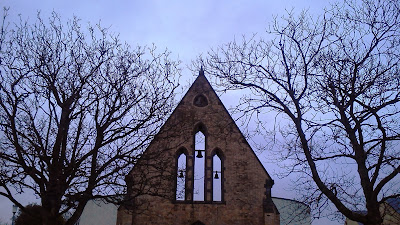 ‘Yea, the darkness shineth as day, / the light is about me’ (Jonathan Dark) … evening lights at the Church of the Sacred Heart in Laytown, Co Meath, yesterday (Photograph: Patrick Comerford, 2014)

I was in Christ Church Cathedral, Dublin, this morning for the Cathedral Eucharist for the Second Sunday after the Epiphany. The celebrant was the Dean of Christ Church, the Very Revd Dermot Dunne, and I was the deacon, reading the Gospel and assisting at the administration of Holy Communion.

We are still in the Season of Epiphany, and this morning’s Gospel reading (John 1: 29-42) is Saint John’s account of the Baptism of Christ in the River Jordan by Saint John the Baptist.

The setting for this morning’s liturgy was Jonathan Dove’s joyful Missa Brevis, sung by the Cathedral Choir.

Jonathan Dove was born in London in 1959 and studied composition with Robin Holloway in Cambridge. He is known for his operatic works, including comic opera, and his interest in enabling much new and wider audiences to gain access to great opera.

His work ranges from his successful comic opera Flight, based on a group of people trapped together in an airport for 24 hours, to works written especially for television, community operas and a series of works scored for period instruments. His most notable opera success in recent years include The Adventures of Pinocchio.

His Tobias and the Angel, a 70-minute opera written in 1999, brings together children, community choirs and professional singers and musicians in a vivid and moving retelling of the Book of Tobit.

Dove’s carol The Three Kings was commissioned for the Service of Nine Lessons and Carols in the Chapel of King’s College, Cambridge, on Christmas Eve 2000.

His music ushered in the millennium, with fanfares performed as part of London’s celebrations at the Millennium Dome. In 2010, his A Song of Joys opened the festivities at the Last Night of the Proms.

Dove’s instinct for the dramatic also informs his church music, using the range and versatility of his imagination in his response to a variety of texts.

His Missa Brevis which we heard this morning, was commissioned by the Cathedral Organists’ Association for their conference in Wells in 2009. The commission required Dove to address a number of stipulations: the music should be challenging, but not be out of the reach of a good church choir; it should be interesting but accessible; it should be economical in its proportions; and it should be in Latin accompanied by organ. The commission also stipulated that the composer had not published a liturgical Mass before.

At its first performed by the Choir of Wells Cathedral, under the direction of Matthew Owens, in 2009, it was immediately recognised that Dove had judged the work perfectly. Later that year, this Miss Brevis was chosen for the BBC’s Christmas Day Worship broadcast, and against for the BBC Radio 4’s Easter Eucharist in Liverpool Cathedral last year [2013].

The Communion Anthem this morning was also composed by Dove. The anthem, Seek him that maketh the seven stars is based on Amos 5: 9 and Psalm 139.

This anthem was commissioned on 1995 by the Friends of the Royal Academy of Arts for their annual service in Saint James’s Church, Piccadilly. The organ part creates a musical image of the night sky with its twinkling stars which he says ‘sets the choir wondering who made them. The refrain “Seek him” starts in devotional longing but is eventually released into a joyful dance, finally coming to rest in serenity:

Seek him that maketh the seven stars and Orion
and turneth the shadow of death into the morning.
Alleluia, yea, the darkness shineth as day,
the light is about me. Amen.