Finding the relics of saints in churches,
but who was the boy in Wexford Friary?

The reliquary of Saint Adjutor in the Franciscan Friary Church in Wexford (Photograph: Patrick Comerford, 2016)

Today is the Feast of All Saints [1 November], and one of the major feasts in the calendar of the Church.

It is a constant source of amazement to realise how many saints’ bodies and parts of their bodies are kept in churches throughout Ireland. They include the head of Oliver Plunkett in Saint Peter’s Church, Drogheda, the remains of Saint Valentine in Whitefriar Street Church in Dublin, until recently the heart of Saint Laurence O’Toole in Christ Church Cathedral, Dublin, and the bodies of two child martyrs from Rome: Saint Victoria in Saint Mary’s Cathedral, Kilkenny, and Saint Adjutor in the Franciscan Friary in Wexford.

The tomb of Canon John Corrin in the Friary was designed by AWN Pugin (Photograph: Patrick Comerford, 2016)

Whether Saint Adjutor ever existed is a topic for another debate. Visitors who come to see his shrine only are likely to pass by the more interesting monument designed by AWN Pugin to commemorate Canon John Corrin, who was parish priest of Wexford throughout 1798 and who died on 4 April 1835, at the age of 86.

Of your charity
Pray for the repose of the soul of
Very Rev John Corrin, VG [Vicar General] of Ferns,
Who lieth buried under this stone.

Canon Corrin used the Friary Church as his parish church as there was no Roman Catholic parish church in the town until 1858 and the completion of the Twin Churches in Rowe Street and Bride Street.

Shortly after his appointment as parish priest in 1781, Canon Corrin rebuilt the Friary chapel with the support of the Franciscans and the parish. It was enlarged in 1812 and again in 1827. 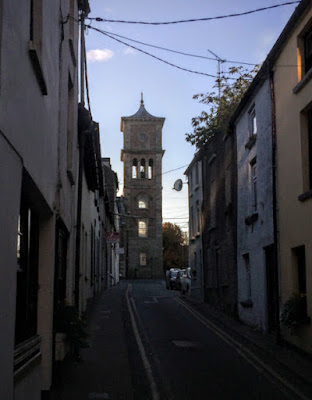 The Italianate tower of the Friary seen from High Street through the houses of Mary Street (Photograph: Patrick Comerford, 2016) 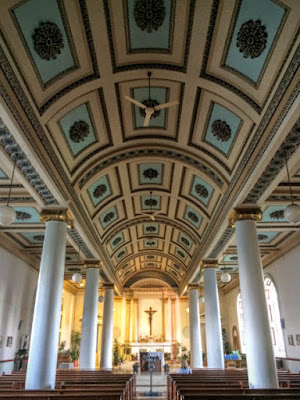 The striking interior of the Friary Church with its exquisite stucco work and panelled ceiling (Photograph: Patrick Comerford, 2016) 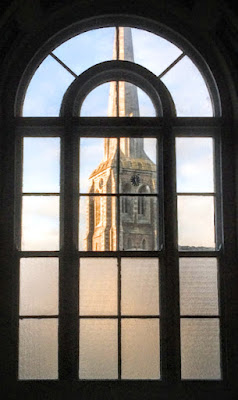 The spire of Rowe Street church glimpsed through a window in the Friary church (Photograph: Patrick Comerford, 2016)