Bloom-like walks and the story of the ‘Prince of Thomond’ 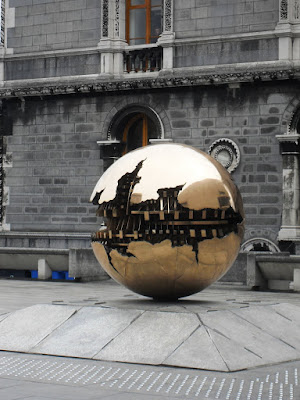 The weather has been beautiful in Dublin for the past few days – clear blue skies, warm sunshine and temperatures to rival those in Cyprus and other parts of the Mediterranean.

I spent much of today enjoying the sunshine in the back garden. But I remember how I loved walking in this weather until the months before I was diagnosed with sarcoidosis and a severe deficiency of Vitamin B12. How I used to love walking by the banks of the River Dodder on the way to and from work, or walking from the institute to Rathgar village or even as far as Rathmines, just for a cup of coffee.

Despite that diagnosis, I have managed to have a walk on the beach most weeks. Although those walks do little for me in terms of fitness and exercise – I have put on a little too much weight in recent months – they help lift my spirits and sustain a sense of pleasure with this world and with where I live.

I still have pains in my knees, a constant sensation of “pins-and-needles” under my feet, and a dry cough. But I’m sleeping more regularly, and over the past few weeks I have noticed the positive benefits of the steroids I have been prescribed. Those walks on the beach may not have become any more vigorous, but I’m working at a better pace, and have found easier to concentrate on writing papers for conferences and journals. 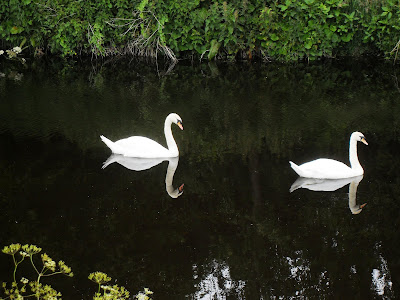 At swim two birds ... a pair of swans enjoying the sunshine on the River Dodder below the bridge at Rathfarnham Road this week (Photograph: Patrick Comerford, 2011)

Earlier this week, I walked along the banks of the River Dodder for the first time for about four months. It was sunny afternoon, one or two people were fishing from the banks, and there were magpies and some mallards on the water and a pair of swans between the weir and the bridge on Rathfarnham Road.

I walked on down Rathfarnham Road, past the houses I had lived in as a child and had been born in, and past Terenure Synagogue, before catching the bus in Terenure village. And I felt so much better for that walk that I had another the following day.

I had been working in the Irish Architectural Archives, researching a journal paper on my great-grandfather, James Comerford, and his work on the Irish House, built in 1870. Earlier in the morning I had walked from College Green through Trinity College to Merrion Square. As I finished I found to my delight that once again it was a sunny afternoon. Rather than walking back through Trinity into College Green for a bus, I walked along Lower Fitzwilliam Street, Upper Fitzwilliam Street, Fitzwilliam Square East, Fitzwilliam Place, across Leeson Street, and along Adelaide Road, past the former synagogue. 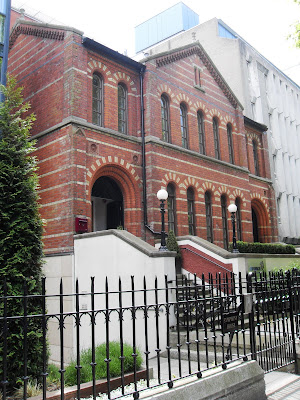 Adelaide Road Synagogue (architect JJ O’Callaghan) was the first purpose-built synagogue in Ireland, and cost over £5,000 to build in 1892. It was designed in what could be described as a vaguely Byzantine style, and was extended in 1925 to provide school facilities for Jewish children.

This synagogue once held over 600 people on a Saturday, but by the 1990s there were less than 50 regular members of the congregation. With declining numbers, the congregation decided to merge with the Terenure Synagogue, the building was sold in 1999 and most of the site redeveloped as offices. 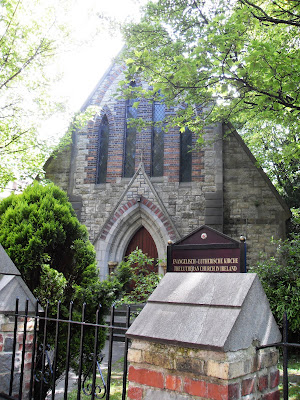 A few paces on is Saint Finian’s Lutheran Church (architect ET Owen), which had been built in 1863 as the Dublin church of the Irivingites, a strange sect who were known as the Catholic Apostolic Church and once had their main London church in Gordon Square, Bloomsbury. Saint Finian’s is a simple structure with pointed arched windows on its main front. The side elevation is pierced by smaller windows and has simple buttresses.

On further is Adelaide Road Presbyterian Church (1840), with a full vista down Earlsfort Terrace. Although the architect of the building is unknown, the dramatic façade by designed by HJ Lundy. The Ionic portico was inspired by Palladio’s Villa Foscari or Villa Malcontenta (1558-1560) in Mira, near Venice.

Unfortunately the dramatic façade with that wonderful portico is all that really remains of this church, as I found when I took part in a funeral there some years ago. The interior has been gutted and the building redeveloped, supposedly reflecting the changing role of the church in the community. 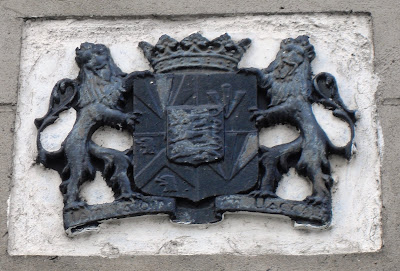 The heraldic plaque above the door at No 5 Charlemont Street recalls the bizarre story of the self-styled Prince of Thomond (Photograph: Patrick Comerford, 2011)

At the junction of Harcourt Road and Charlemont Street, I was surprised to see that a curious heraldic plaque still survives over No 5, one of the few surviving Georgian houses surviving on thus street.

The house has been incorporated in to the Citi Hostel but the heraldic plaque, now covered in black paint, dates back to the mid-20th century when the house was the residence a man who wanted to be known as “Colonel His Highness Raymond Moulton Seaghan O’Brien, Prince of Thomond, Earl and Count of Thomond, Count of Pogla (Constitutionally and Judicially entitled the O’Brien, Prince of the Dalcassians of Thomond), of Clare Castle, Principality of Thomond.”

To be more precise, this self-styled prince claimed his house was the Royal Dalcassian Legation and the diplomatic presence of his principality in a foreign capital. The Irish Government and most other countries ignored him, but he claimed to have documents proving that Norway, Yugoslavia, Latvia and Estonia had recognised his sovereignty over Thomond.

In London, he appointed a “Count Howard d’Angeryille” As his “Minister Plenipotentiary and Envoy Extra-ordinary, Prince Nicholas Vladimirovitch Galitzine, an exiled member of the Czarist Russian nobility, received by mail “The Most Honourable Dalcassian Order of the Princely House of Thomond.” The Russian prince ended his days happily in Canada, running “Ocean Bliss,” a bed and breakfast house on Sointula Island off the north east coast of Vancouver Island.

But the story of the self-styled Prince of Thomond was a less happy one. He claimed his “country” was Thomond, and that he was directly descended not only of Brian Boru but from an Irish royal line that he traced back to 1300 B.C. The last official Prince of Thomond surrendered his title in 1545, and one wondered whether O’Brien was deluded or this was all a grand, Ruritanian hoax.

In 1940s, the then Lord Inchiquin declared indignantly that Raymond O’Brien was an impostor, pointing out: “The only person entitled to be called Prince or Earl of Thomond is myself.”

O’Brien had arrived in Ireland at the beginning of World War II, claiming he was the Earl of Thomond and the O’Brien, although his only supporting documents were a Mexican court judgment and some newspaper cuttings. He called himself “prince” on his children’s birth certificates, faked a court case of slander against him, set up his own order of chivalry, elicited a blessing from the Vatican, and even attempted to issue his own postage stamps.

The genealogist Edward MacLysaght dryly recounted that “he was eventually confined to St John of Gods, an institution then situated at Stillorgan Castle … an address well suited to his dignity.”

He died in 1977, but his story shows how anyone can claim to be an Irish “chief,” calling himself the Mac This or the Mac That. Other similar cases in the past include a plain Mr Phelan who became “The O Phelan, Prince of the Decies,” and Michael Neale, who called himself the “Prince of the Saltees” after he bought the Great Saltee Island, off the coast of Co Wexford. More recently there was the absurd case of “Terence MacCarthy Mor, Prince of Desmond,” who started his own order of chivalry and had a great inauguration service on the Rock of Cashel attended by many Americans amid great pomp and circumstance. After his bogus claims were exposed, he moved to live in secluded retirement in Tangiers.

Charlemont Street had more benign residents in the past: John Wesley stayed at No 46, the home of Arthur Keene, when he visited Dublin in 1787, and the singers Mary Black and Frances Black grew up on this street. 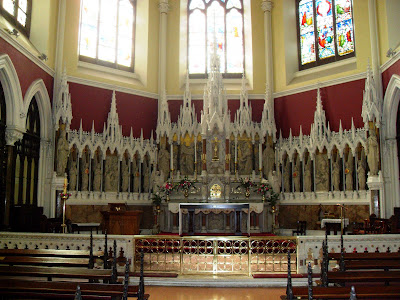 The pinnacled reredos behind the altar in Saint Kevin’s Church, Harrington Street ... the work of James Comerford in the 1870s (Photograph: Patrick Comerford, 2011)

From the less-than-regal setting of the former “Royal Dalcassian Legation,” I strolled on through Kelly’s Corner, and stopped at Saint Kevin’s Church in Harrington Street to take photographs of the pinnacled reredos behind the altar, which was also the work of my great-grandfather, James Comerford, around the same time as he worked on the Irish House. 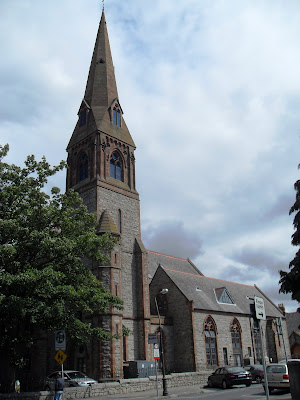 Saint Kevin’s Church, on the site of the former Royal Portobello Gardens, closed after less than a century on 28 January 1983 (Photograph: Patrick Comerford, 2011)

Further on along the South Circular Road, heading towards Leonard’s Corner, is another Saint Kevin’s Church, the former Church of Ireland parish church. It stands on the site of the former Royal Portobello Gardens, which opened in 1839.

The original Saint Kevin’s, which now stands in ruins in Saint Kevin’s Park in Camden Row, was one of the four churches of the Irish settlement on the River Poddle, and later formed part of the Manor of Saint Sepulchre.

The parish became independent from Saint Peter’s in 1876, and the Victorian Saint Kevin’s (1888-1889, architect Sir Thomas Drew) was built on the corner of the South Circular Road and Victoria Street with a bequest from a Miss Jane Shannon of Rathgar. The Gothic building, with red sandstone trims, was consecrated as a church in 1889.

Saint Kevin’s Church became part of the Saint Patrick’s Cathedral group of parishes in 1981 and closed after a final service on 28 January 1983. After lying empty for many years, the church was converted into apartments in the 1990s, and the adjacent church buildings became a community centre.

I continued on through Leonard’s Corner, and caught the bus at a stop on Upper Clanbrassil Street, close to the terrace of houses in “Little Jerusalem” where James Joyce says Leopold Bloom was born.

Over those two days, I had had my own Bloom-like walk through the streets of Dublin, and I felt much better for that.

The Church of Ireland Gazette in today’s edition [3 June 2011] carries the following report and photograph on the back page [p. 16]: 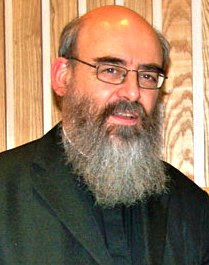 The Church of Ireland Theological Institute (CITI) has announced the appointment of Canon Patrick Comerford as Lecturer in Anglicanism and Liturgy for three years from next September.

For the past five years, Canon Comerford has been working within CITI as Director of Spiritual Formation, during which time he has been an active participant in the revision of ministerial training as introduced by the Archbishops and Bishops in 2008.

Speaking of Canon Comerford’s appointment, Dr Maurice Elliott, CITI Principal, said: “I am delighted that Patrick Comerford is to carry on as a colleague within CITI. He is a valued member of our collaborative staff team and is much appreciated by all the students.”

In his capacity as Chair of the Governing Council, Archbishop Michael Jackson commented: “The appointment of Canon Comerford to what is a new position in the Church of Ireland Theological Institute is something which I greatly welcome.
“Canon Comerford brings commitment and enthusiasm to everything he does; he is great inspirer of people; and he is attentive to detail and magnanimous in imagination.”

Canon Comerford has long experience in the fields of both journalism and mission; he is a member of many central church bodies, including the Standing Committee, the Commission for Christian Unity and Dialogue and the Inter-faith Working Group.
Posted by Patrick Comerford at 06:00 2 comments: