This quarter-page news report and photograph is published in the ‘Church of Ireland Gazette’ today, 31 March 2017, page 3: 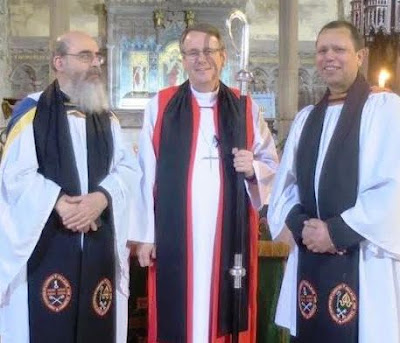 Canon Patrick Comerford, left, at his installation in St Mary’s Cathedral, with the Bishop of Limerick and Killaloe, Dr Kenneth Kearon, and the Dean of Killaloe and Clonfert, the Very Revd Gary Paulsen (Photo: Marty Sanders)

Canon Patrick Comerford, Priest-in-Charge of the Rathkeale and Kilnaughtin Group of Parishes in the Diocese of Limerick and Killaloe, was recently installed as Canon Precentor in the diocesan cathedral chapters.

At the same service, Bishop Kearon launched the new Diocesan Guild of Lay Readers, chaired by Audrey Clarke Gordon of Nenagh Union of Parishes, and the diocesan readers recommitted themselves to the work for which they were commissioned.

The new readers recently completed the Certificate in Christian Studies programme run in the diocese of Cashel, Ferns and Ossory.

The guest preacher, the Rt Rev Patrick Rooke, Bishop of Tuam, Killala and Achonry, spoke of the importance of the ministry and witness of lay readers, and of the educational role that Canon Patrick Comerford is soon to take up in the diocese.

Enjoying the ‘flawless Greek’ of
the ‘washerwomen’ of Mungret 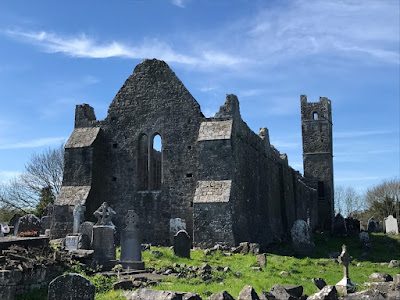 Mungret Abbey on the outskirts of Limerick is one of the oldest monastic sites in Munster (Photograph: Patrick Comerford, 2017)

In my journeys between Askeaton and Limerick during the week, I regularly pass Mungret and the ruins of Saint Nessan’s Church, about three miles west of the city on the south side of the road between Limerick and Askeaton and Foynes. Because it is near Raheen on the western outskirts of Limerick City, Mungret is rapidly becoming a suburb as the city expands, with its own identity and an estimated population of about 9,000.

Despite its rapid growth in recent years, the church ruins are an indication of the early monastic settlement here that dates back almost 1,500 years, and the site is much older as its name indicates.

The name appears to mean ‘bog or sedgy morass of the sloping hill,’ although some sources say the Irish Muine Gairid, meaning ‘the Short Hill,’ or ‘the Short Thicket or Grove.’

At one time, Mungret was one of the most important Early Christian monasteries in north Munster. The site is said to date back to 551, when a monastery was founded here by Saint Nessan.

It is said that Mungret once had six churches and abut 1,500 monks. Today the ruins of only four churches survive on the site:

1, Mungret Abbey, the main church, which dates back to at least 1100 AD and continued to be added to into the late Middle Ages.

2, A smaller, possibly pre-Norman church, which is across the road from the main graveyard, and is believed to date from between 800 and 1100.

3, A ruined Church of Ireland parish church, dating from the 1820s.

4, The monastery church or Saint Nessan’s Church, the ruins of a 12th century church next to the Limerick-Foynes road, which is a narrow building with an east window and a flat-headed west doorway.

In addition, there are two graveyards in this large, sprawling monastic site. The largest graveyard surrounds the old abbey church and the ruined Church of Ireland parish church. The second graveyard is located to the east and surrounds the smaller possible pre-Norman church. 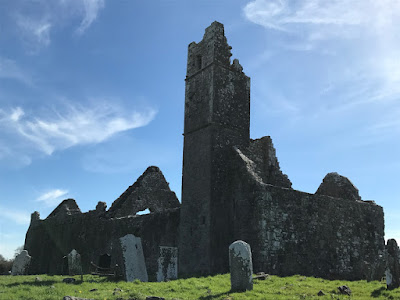 The tower at Mungret Abbey was built in the 15th century (Photograph: Patrick Comerford, 2017)

The story is told locally about the ‘Wise Women of Mungret,’ when Mungret was renowned as a monastic school and seat of learning. A contest had been arranged between Mungret and another famous monastic school to decide which monastery had the more learned scholars.

When visiting monks arrived from the Monastery of Saint Carthage at Lismore, Co Waterford, the monks of Mungret did not wish to be defeated in the contest, devised a plan to intimidate the opposition. A number of monks from Mungret dressed up as women on the day of the contest, and began washing clothes near a ford that the other monks had to cross.

The monks decided that if the washerwomen were fluent in Greek and Latin, then the learned scholars of the monastery would surely defeat them in the contest. They returned to Lismore, leaving the monks of Mungret unchallenged. 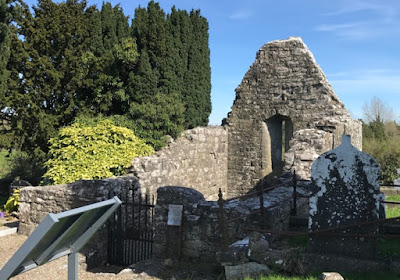 The small church at Mungret Abbey is believed to date from between 800 and 1100 (Photograph: Patrick Comerford, 2017)

It is said the 1,500 monks at Mungret were divided into three groups: one-third were preachers, one-third recited the psalms and daily offices, and one-third who spent their days in spiritual exercises.

The Abbots of Mungret were powerful local figures, and one abbot, Bodbgal, was killed in a battle in 757. But the monastery was plundered on several occasions. Although it is said it was raided on three occasions by the Vikings in the ninth century, the only recorded attack was in 834. Despite these Viking raids, the monastery was held in such high repute that King Cormac of Cashel bequeathed three ounces of gold and a satin chasuble to Mungret in 902.

By the early tenth century, the Vikings had settled permanently and peacefully in Limerick City. The accidental burning of the monastery in 1081, or the attack by Domhnall Mac Lochlain of Ulster in 1088, when the monastery was burned again, may have provided the opportunities to rebuild the once timber monastery in stone. Mungret was plundered again by Murtagh O Brien in 1107.

The diocesan system was introduced to the Church in Ireland at the Synod of Rathbreasail in 1111. At the time, Mungret was the largest ecclesiastical centre in Co Limerick, and the monks hoped Mungret would become the centre for a new diocese. Instead, however, Limerick was chosen because of the power and influence of the O Brien family. The decision was resisted by the monks of Mungret, who continued to pace themselves under the jurisdiction of the Archbishops of Cashel. 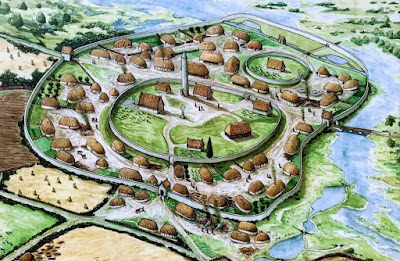 The power of the monastery was broken in 1179, when the King of Munster, Donal Mor O Brien, granted Mungret Abbey and its lands to the Bishop of Limerick, Brictius. The Bishops of Limerick made Mungret their own manor, and without its own income the monastery soon went into decline.

Although the main church on the site has the proportions and the faded dignity of a mediaeval cathedral, it became a parish church, and from the 12th century onward it was served by Canons Regular of the Order of Saint Augustine. Other local traditions associate the mediaeval monastery with the Dominicans and with the Knights Templar.

The largest church at Mungret, according to a plaque on the north wall, is a pre-Norman church and dates back to least 1100 AD. It was rebuilt between 1251 and 1272. The ruin is divided into three parts, the chancel to the east, which dates from the 13th century, the nave in the centre, the date of which is unknown, and the west part of the ruin, which dates from the 15th century.

There is a lintelled doorway with inclined jambs leading into the nave, the oldest part of the church. The square tower at the west end, added in the 15th century, served as the priests’ living quarters.

The abbey church continued in use as the Church of Ireland parish church until 1822, although by 1780 most of the building was without a roof. There is a number of tombs in the graveyard, with names that include Vokes, Shute, Massey and Beauchamp. Buried here too is Seamus Ó Dálaigh, a Gaelic poet who died in 1810. 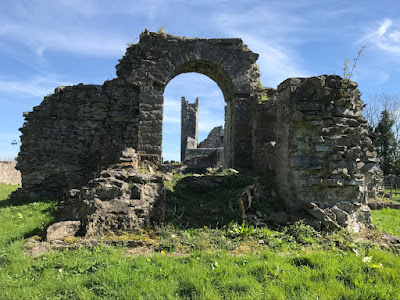 The ruins of the Church of Ireland parish church, designed by James Pain, with the tower of Mungret Abbey seen through the surviving arch (Photograph: Patrick Comerford, 2017)

In 1822, the Parish of Mungret received a grant of £300 from the Boartd of First Fruits for building a new parish church on the site. The architect of the new church was James Pain (1779-1877), the Limerick-based architect whose other works include Castletown Church near Pallaskenry, Saint Munchin’s Church, Limerick, and the old Rectory in Askeaton.

Pain’s new parish church in Mungret was consecrated in 1825. The church was designed for a congregation of 100, with box pews and an octagonal tower at the west end. The glebe house, now known as Mount Mungret, was built in 1826. 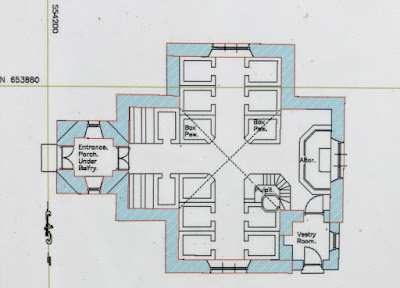 Seventy acres of the neighbouring Bindon estate were bought by the Church of Ireland Bishop of Limerick in 1851 as one of five trustees to establish an agricultural training college and model farm, that opened in 1858.

By 1870, the number of Church of Ireland parishioners in Mungret had fallen to 10, and services were held only four times a year. The parish was amalgamated with Saint Michael’s in Limerick City, the glebe house was sold in 1874, and the church closed in 1877.

The roof was removed from the church in 1900, and in 1929 the stonework of the church was sold and used to build the presbytery in the Roman Catholic parish in Raheen.

Meanwhile, the abbey church and the churches on the site were transferred to the state in 1880. Since then, the site has been maintained by the Board of Works, later the Office of Public Works, which carried out extensive repairs of the ruins in 1932. The surrounding graveyard is still in use and has been extended in the past 25-30 years.

The bell of Mungret was found at Loghmore near the abbey. In the Catholic Directory in 1837, Mungret parish is referred to as Loghmore. That year, the parish name was changed to Mungret.

The monastic ruins and the graveyard are overlooked by the buildings of the former college. It was first an agricultural college and then was a Limerick Roman Catholic diocesan seminary until 1888. Mungret College then became a Jesuit college and secondary school from 1882. The college produced over 1,000 priests, although not quite the 1,500 associated in myth with Mungret Abbey.

Past pupils of Mungret College include Brendan Bracken, a politician closely linked with Winston Churchill; Frank Fahy TD; Monsignor Hugh O’Flaherty, the ‘Scarlet Pimpernel of the Vatican’ in World War II and the hero of the movie The Scarlet and the Black; the author Oliver St John Gogarty; and Vincent O’Brien, celebrated racehorse trainer and breeder.

Mungret College closed for the last time in 1974. The Jesuits have their own section in the graveyard, with a number of plain crosses, although some of the crosses are without names. 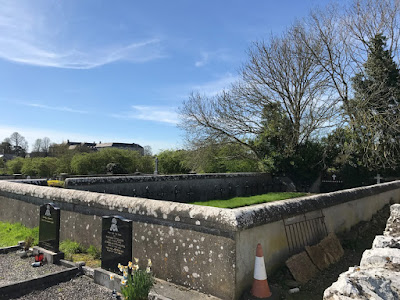 The Jesuit graveyard at Mungret Abbey, with the former Mungret College in the background (Photograph: Patrick Comerford, 2017) 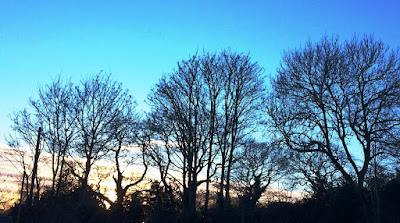 ‘Give thanks for the ecological work of … churches around the world’ … sunset on Cross in Hand Lane in Lichfield (Photograph: Patrick Comerford)

This week, from Sunday (26 March) until tomorrow (1 April), the USPG Lent Prayer Diary is following the topic ‘A World of Injustice.’ The topic is introduced on Sunday in an article in the Prayer Diary by Professor Mathew Koshy Punnackad, Honorary Director of the Department of Ecological Concerns of the Church of South India Synod.