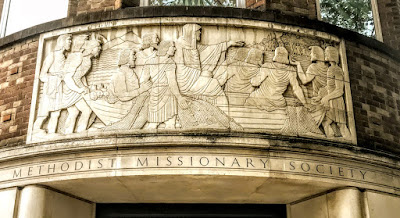 The sculpture by David Evans above the entrance to Methodist Church House depicts the call of the disciples, the draught of fish and the great mission commission (Photograph: Patrick Comerford, 2018)

I have spent most of today [19 September 2018] at a meeting in London of the trustees of the Anglican mission agency USPG (United Society Partners in the Gospel).

USPG is in the middle of moving offices from Great Suffolk Street to Trinity Street, with temporary offices in the Mothers’ Union Building at Mary Sumner House on Tufton Street, Westminster. So, today’s meeting took place in Methodist Church House on the corner of Marylebone Road and Nottingham Place, almost opposite Madam Tussauds and beside the Marylebone campus of the University of Westminster.

I caught the Stansted Express to Liverpool Street and the tube to the nearest underground station at Baker Street. Of course, I missed my routine from previous board meetings of walking from Liverpool Street to Saint Paul’s Cathedral, across the Millennium Bridge to the Tate on South Bank, and continuing on the USPG offices in Southwark.

Those early morning walks and the return walks in the late afternoons, provided opportunities for visiting one or two unexplored Wren churches along the way, or visiting other architectural or archaeological locations.

When the three main branches of British Methodism came together in 1932, their mission societies also came together to form the Methodist Missionary Society, and ‘Mission House’ was begun as their headquarters in 1939, a symbol of this unity in action.

It seemed so appropriate today that the oldest Anglican mission agency should meet in what was once the principal office of Methodist mission work. 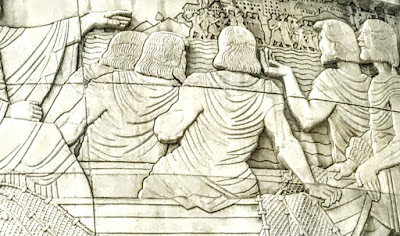 The great commission … a detail on the sculpture by David Evans (Photograph: Patrick Comerford, 2018)

The former Methodist Missionary Society building was built in 1939 and was designed by the architects Paul V Mauger (1896-1982), a Quaker who designed many Quaker meeting houses, Arthur J May and Leo Sylvester Sullivan (1878-1964).

The BBC leased this building until 1946, and for over 20 years the building has been known as ‘Methodist Church House,’ since it became the offices for the major part of the British Connexional Team in 1996.

This is a plain, almost brutalist building, of the functional design that I associate with war-time buildings. The most interesting part of the building is the collection of relief sculptures adorning the building, the work of the sculptor David Evans (1893-1959) in 1941.

Evans was awarded the Rome Scholarship in Sculpture in 1923, and spent the next two years studying in Italy (1924-1926). After returning to Britain in 1927, he obtained a solo exhibition at the Goupil Gallery of works he had completed in Rome. These included portraits of the staff at the British School, some ideal subjects and statuettes.

Evans executed two important commissions for Liverpool Cathedral, a memorial to Bishop Francis Chavasse (1846-1928) and the Nurses’ Memorial. He also made portraits of John Galsworthy, Sir Hugh Walpole and Sir Arthur Evans, the archaeologist at Knossos in Crete.

Evans spent some time working in the US, beginning with two years teaching at Cranbrook Academy of Art (1929-1930). There he completed works for the Rockefeller Center, Radio City, Brooklyn Post Office, a bank on Wall Street, Saint Thomas’s Church on Fifth Avenue and a memorial to Hicks, an early member of the American Society for the Protection of Animals.

Evans also created ‘Christ in Prayer’ for the doorway to Christchurch, Cranbrook, Michigan, which he considered one of the most important commissions of his career. 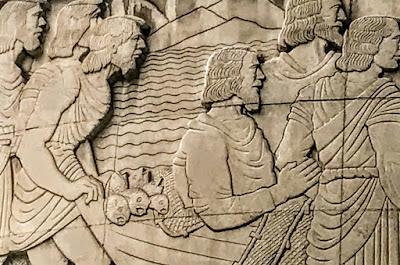 The draught of fish … a detail on the sculpture by David Evans (Photograph: Patrick Comerford, 2018)

Evans was back in Britain from 1933 and continued to work on memorials, reliefs and portraits. These include a memorial at the Revd W David Kelly College in Tavistock, two small sculptures of ‘Science’ and ‘Letters’ flanking a doorway to the central reading room in Cambridge University Library (commissioned by the architect, Sir Giles Gilbert Scott, 1933-1934), and panels surrounding the main entrance to County Hall, Carmarthen, a building designed by Sir Percy Thomas in 1935.

Evans contributed to the large-scale decorative scheme erected on the exterior of Selfridge’s in Oxford Street to mark the coronation of George VI. He made a life-size bust of Captain Thomas Coram for the Foundling Hospital, and a relief and six panels for a bronze door at the Methodist Missionary Society.

He also restored a wooden frieze for Saint James’s Church, Piccadilly, made the RAF Memorial at Saint Clement Danes Church on the Strand, a wood carving for University College London, and a figure of ‘Father Thames’ for the Watling Street façade of New Change Buildings.

However, the work for which Evans is best known was recreating the huge wooden figures of ‘Gog’ and ‘Magog’ in 1953 for the Guildhall, London, based on the originals that had been damaged in a bombing raid in 1940.

Evans also worked in the film industry, where his work included a statue in plaster of Henry VIII for the Boulting Brothers’ film The Guinea Pig (1948). He died in Welwyn Garden City, Hertfordshire, in 1959.

The low relief over the front door or main entrance of Methodist Church House shows Christ calling the Disciples, telling them he will make them ‘fishers of men’, and the Great Commission.

To emphasise their enthusiasm in the task of mission and their success, a large number of fishes’ heads peer out from the stern of the boat. It is also a reminder of the miraculous draft of fish, the first post-Resurrection miracle (John 21: 1-14). 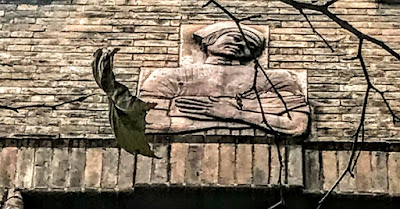 A nurse among the portraits above the first floor (Photograph: Patrick Comerford, 2018)

High up, above first floor windows on the Marylebone Road side of the building, are three portraits by Evans illustrating Methodist missionary priorities: a nurse cradling a baby, and an African and an Indian Christian.

The cornerstone is inscribed:

‘I look upon the whole world as my parish’
John Wesley

Today’s meeting ended with time to remember people linked with USPG who have died in recent weeks, including Bishop Edward Malecdan of the Philippines, Margaret Messer, a former SPG missionary in India, Brother Giles SSF, Sheila Budge, the Revd Robert Browne, the Revd Alan Talbot, and Doulgas Yates, a former chair of trustees.

Of course, John Wesley was once an SPG missionary too, which added an interesting context to our location today and our closing prayers this afternoon. 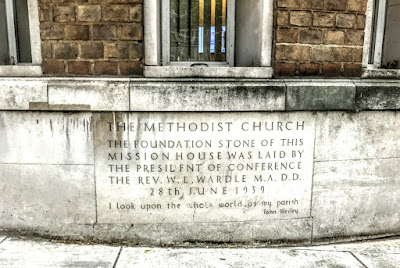 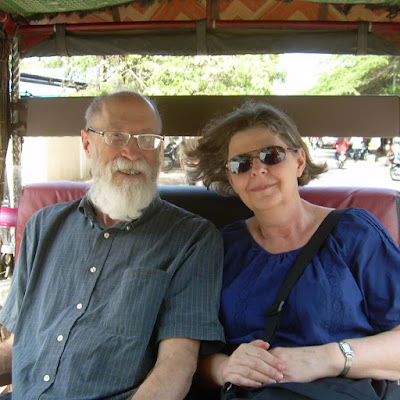 Paul Joseph Nelson, who died at Souderton Mennonite Home in Pennsylvania, last Thursday [13 September 2018], spent many years in Dublin in the late 1970s and throughout the 1980s.

During their time in Dublin, I shared many activities with Paul and Dawn, including protests organised by Christian CND, conferences organised by the Student Christian Movement, and editorial workshops on a nonviolence journal called Dawn – the name was truly a coincidence – which was produced in the SCM House in Dublin, then at 168 Rathgar Road.

Paul was born in Iowa City on 23 April 1951. At the time, his parents – Boyd H and Welma B (Graber) Nelson – were living in Wayland, Iowa. The family moved to Elkhart, Indiana, in 1952. Paul was baptised in Prairie Street Mennonite Church in 1964.

As a child and a teenager, Paul was intellectually curious, adept at math and science, and designed things such as a unicycle, a skateboard and a banjo.

Paul graduated from Bethany Christian High School in Goshen in 1969, and from Goshen College in 1973 with a degree in chemistry. In the mid-1970s, he was part of Assembly Mennonite Church (Goshen), took classes at Associated (now Anabaptist) Mennonite Biblical Seminary (Elkhart), and for a time was director of the Elkhart County Home.

Paul and Dawn were the first of a group of US Mennonites who came to Dublin in autumn 1979. There they were part of the Mennonite mission and peace witness team to support an Irish Mennonite, Mike Garde. They were sponsored by the Mennonite Board of Missions and the Mennonite Central Committee and the community shared a large house in inner-city Ballybough, close to Summerhill and Croke Park, where I was often a welcome guest.

In Dublin, Paul returned to graduate studies at Trinity College Dublin, and earned a master’s degree in mechanical engineering. Paul and his friend Graham Corcoran then established Phoenix Cycles, which operated for several years in a workshop near TCD.

This was an effort to be self-supporting and to provide jobs at a time of high unemployment in Ireland.

I bought one of those Phoenix bikes around 1984 – I remember it was lightweight, green and had ten gears – and while I was studying for my BD I used it for a year to cycle from Firhouse to Kimmage Manor for lectures each morning, before heading on into work in The Irish Times.

Eventually, cycling home from work in the late evening in Dublin became a hair-raising if not life-threating experience, with potholes big enough to be craters but invisible in the dark, and late-night drunks driving home from the pub. I passed Paul’s bike onto another friend, but still remember its pioneering qualities.

Paul and Dawn returned to the US with their three children in 1991, moving to Harleysville, Pennsylvania, near Dawn’s family home. He worked as information technology manager in Hatfield, where he worked for 20 years, making the 12-mile round-trip to work on his bicycle in all kinds of weather. I wonder whether it was based on his Phoenix prototype, and whether he remembered my scary stories about the bike he had sold me.

Paul was diagnosed with progressive supranuclear palsy, a form of frontotemporal dementia, late in 2014. For some time, he continued to volunteer several mornings a week at the Mennonite Central Committee Material Resource Centre in Harleysville.

Paul shared Dawn’s interest in Christian formation, and he enjoyed classes and retreats, and the conversation and companionship of Barry’s Boys, a men’s group that provided support as Paul’s health declined. He moved from the cottage he had shared with Dawn at Souderton Mennonite Home into Park View and then into nursing care.

He continued to take pleasure in frequent visits from his children, listening to audio books, and following English Premier League soccer and the Philadelphia Phillies and Eagles.

Dawn continued to write after their return to America. We kept in touch occasionally, and we were sorry to miss each other during her last visit to Ireland.

Throughout his life, Paul’s deep commitments, his fundamental decency, and his dry wit endeared him to his family and his friends.

In keeping with his generosity of spirit, Paul has donated his brain to the University of Pennsylvania Medical Centre in the hope that study of his brain can contribute to understanding and effective treatment of the brain disorder that took his life. 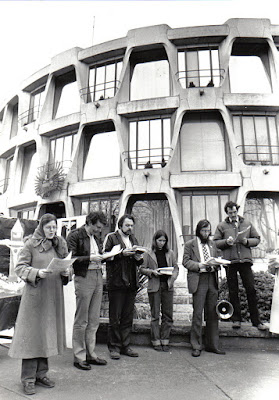 Dawn Ruth Nelson (left) leading the hymn-singing at a service outside the US Embassy in Dublin on 9 April 1982 to protest against naming a nuclear submarine ‘USS Corpus Christi’ … with (from left) Brian Judge, the Revd Feargal Brennan SJ, Linda Liechty, Patrick Comerford, and Martin Rowan of the Student Christian Movement