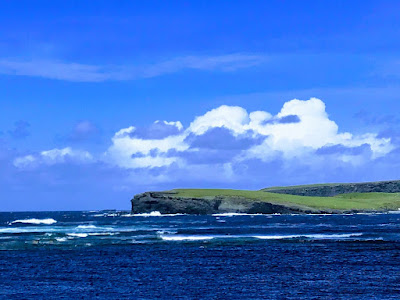 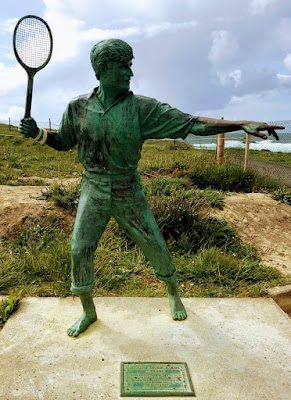 Posted by Patrick Comerford at 20:12 No comments:

Mount Saint Alphonsus,
the Redemptorist Church
at the heart of Limerick 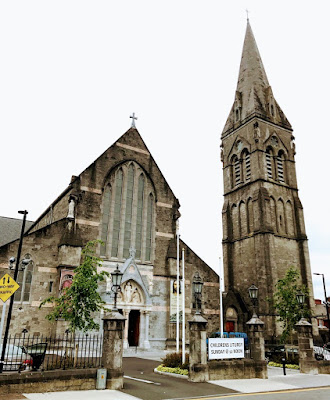 For many people in Limerick, the Redemptorist Church of Mount Saint Alphonsus is ‘Limerick’s spiritual home,’ and they have memories of the retreats and novenas, the ‘lighting of the 1,000 candles’ and the sound of the bells ringing across the city on special occasions.

Father Adrian Egan, who was a student with me in the 1980s, was the rector of Mount Saint Alphonsus for many years, and in his foreword to the 150th anniversary guide book to the church, written and researched by our former lecturer, Professor Brendan McConvery, he admits Mount Saint Alphonsus ‘hasn’t always been without controversy or made its share of mistakes.’

The Redemptorists were formed in Naples in 1732 by the Italian saint, Alphonsus Liguori, and received Papal approval from Pope Benedict XIV as the Congregation of the Most Holy Redeemer in 1749. The Redemptorists first arrived in Limerick in October 1851 to preach a mission in Saint John’s Cathedral at the suggestion of Edward Monsell of Tervoe, near Clarina, and at the invitation of Bishop John Ryan.

Two years later, the Redemptorists established a temporary presence in Bank Place, moved to another house at Henry Street, where they built a temporary chapel, and then moved to the present site – which they named Mount Saint Alphonsus – in 1854.

The foundation stone of a new monastery was laid on the Feast of Saint Alphonsus, 2 August 1856, and the Church of Mount Saint Alphonsus was built in 1858-1862. 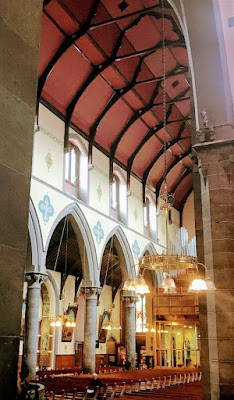 An earlier proposal for a church in the Italianate style was designed by the Dublin architect Denis Butler. However, the church was designed instead by Philip Charles Hardwick (1822-1892), who belonged to the third generation of an important architectural dynasty.

The Gothic Revival became popular in church architecture Limerick in the early 19th century, mainly through the work of James Pain, and its popularity increased with the Oxford Movement and the work of AWN Pugin, and some of the interesting figures in the story of Mount Saint Alphonsus were members of the Oxford Movement who became Roman Catholics.

Father Edward Douglas had joined the Roman Catholic Church three years earlier than Cardinal Newman, and the lay supporters of the Redemptorists when they arrived in Limerick included Edwin Richard Wyndham-Quin, 4th Earl of Dunraven, Aubrey de Vere of Curragh Chase, and Edward Monsell, MP for Limerick and later Lord Emly, and one of the benefactors of Saint Mary’s Church in Rathkeale.

Inside, the church measures 173 ft in length from the crown of the apse to the front door, and 36 ft in width. 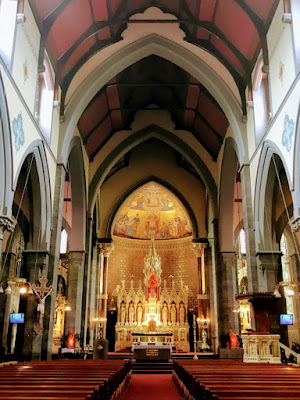 This is a limestone church, with a gabled east-facing nave elevation and buttressing. The mission cross, located to the right of the door, was donated by the Drapers Assistants. The façade sculpture is by the Pearse family.

The chapel of Our Lady of Perpetual Help, dating from 1868, was designed by Pugin’s son-in-law, George Coppinger Ashlin (1837-1921), who also carried out the interior decorative work in 1890.

The crossing of the nave, transepts and choir is marked by full-height arch spanning the width of each side and rising from the square-plan limestone piers. There is an exposed hammer beam roof structure. 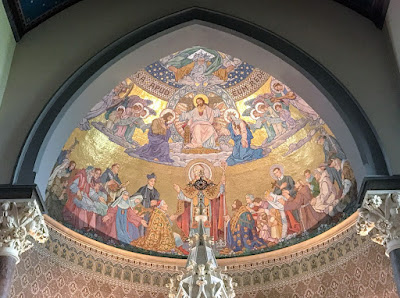 The mosaic of Saint Alphonsus was designed by Ashlin and Coleman and Oppenheimer of Manchester (Photograph: Patrick Comerford, 2017)

The vast mosaic of Saint Alphonsus in glory was designed by Ashlin and Coleman and is the work of Oppenheimer of Manchester. The company was founded by Ludwig Oppenheimer, who was born into an Orthodox Jewish merchant family in Germany. He converted to Christianity and learned the art of mosaics in Venice. He established a mosaic business in Manchester and worked with many of the leading Gothic Revival church architects of the day, including George Ashlin and JJ McCarthy.

The mosaic was put in place over the high altar in 1926 in preparation for the bicentenary of the foundation of the Redemptorists in 1932. 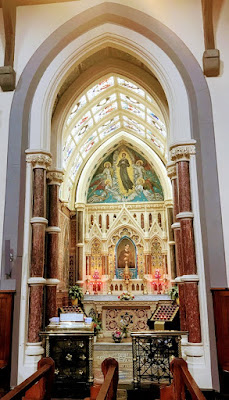 There are chapels in both aisles with decorative mosaic and wall painting. The organ gallery has a timber parapet.

The subjects of the stained-glass windows include Saint Brigid and Saint Margaret, The Visitation, Saint Alphonsus, and Saint Patrick and Saint Brigid converting the Irish.

This church has been a place of beauty and prayer for over a century and a half, and, as Father Adrian Egan says, ‘it continues to be a place of both physical and spiritual beauty that lifts and the soul and soothes the spirit.’ 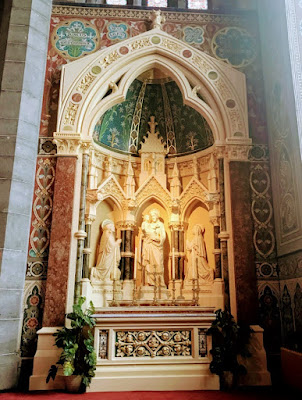 The interior decorative work in Saint Alphonsus was designed by Ashlin and Coleman (Photograph: Patrick Comerford, 2017)