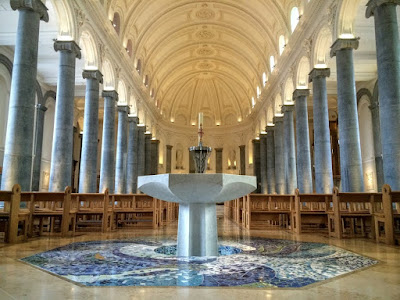 The Baptismal Font in Saint Mel’s Cathedral, Longford, with its ‘Water of Life’ motif, was sculpted by Tom Glendon and the mosaic is the work of Laura O’Hagan(Photograph: Patrick Comerford, 2016)

In the past, I often passed through Longford on my way to Achill Island in Co Mayo. But in recent years, the new bypass has diverted traffic away from Longford, and I have seldom stopped in the town since.

In the past year, Saint Mel’s Cathedral in the heart of Longford, was chosen as Ireland’s favourite building in the RIAI Irish Architecture Awards. Since that poll in June 2015, I have been meaning to visit the cathedral, and at last the opportunity came on Sunday afternoon [7 August 2016].

Of course, Longford is only an hour and a half away, and I ought to have visited Saint Mel’s sooner than that for the restoration work that has been carried out since a fire devastated the cathedral early on Christmas Day 2009. 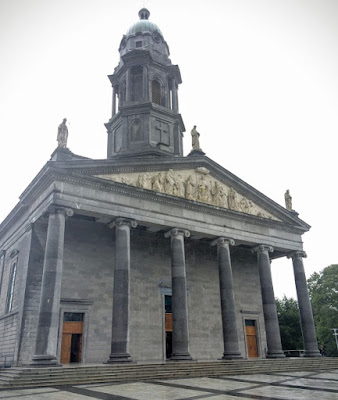 The original cathedral was designed by John Benjamin Keane and the foundation stone was laid on 19 May 1840, but the Great Famine delayed the project for more than 16 years, and the cathedral did not open for public worship until 24 September 1856, and the solemn consecration did not take place until 19 May 1890, exactly 50 years after the foundation stone was first laid.

When fire destroyed the building almost seven years ago, all that was left in the dark of winter was the scorched walls shaping a skeletal cathedral. The fire was accidental and among the losses was Saint Mel’s Crosier, a relic said to have been over 1,000 years old.

But Bishop Colm O’Reilly was resilient and promised: “We will rebuild.”

The restoration project cost €30 million, and rebuilding took five years to complete. A new altar was consecrated in March 2014, and the cathedral re-opened on Christmas Eve 2014, five years after the fire. The achievement is a story of redemption and resurrection. 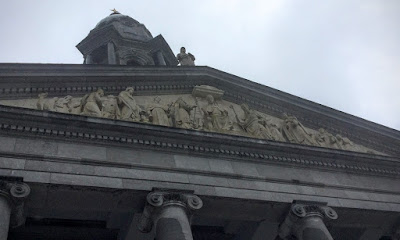 From the outside, Saint Mel’s looks spruced up, with a new plaza in front of it. The surviving Ionic portico was designed in 1889 by AWN Pugin’s son-in-law, George Coppinger Ashlin (1837-1921), of Pugin and Ashlin, and was completed in 1893. The pediment or tympanum above was sculpted by George Smyth and depicts the story of Saint Mel and his consecration as Bishop of Ardagh by Saint Patrick. Among the figures is Saint Brigid of Kildare, said to have been consecrated a bishop by the blind Saint Mel.

Inside, the cathedral is majestic yet simple and filled with light, and the interior is breath-taking. The impression of modern light and fresh airiness is enhanced by the white plasterwork by George O’Malley and his team, in the wide spans of the vaulted ceiling, by the stained glass, by the polished lime stone flooring and by the dramatic, massive columns of blue limestone, each weighing 28 stone, and shaping the nave.

The limestone was quarried in Old Leighlin, Co Carlow, and the columns are topped by a series of 30 angels originally sculpted by Terence Farrell in the 1850s and restored by George O’Malley.

This is a cathedral for the 21st century and the first sight the visitor beholds on entering the building is the impressive Baptismal Font, with its “Water of Life” motif. And so it should be, for baptism is entry into the Church.

The font was sculpted by Tom Glendon and the mosaic is the work of Laura O’Hagan. 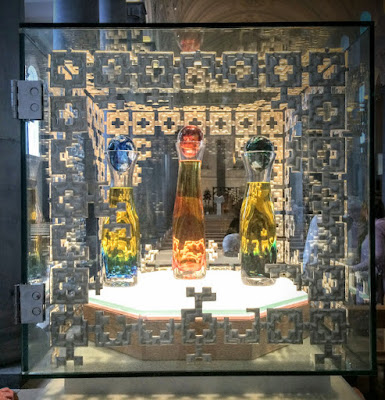 The Aumbry with the sacrament oils is the work of Colm Redmond, Tom Glendon, Vicki and Denise Donovan(Photograph: Patrick Comerford, 2016)

To the left of the font, the new Aumbry holds the holy oils for the sacraments of Baptism, Confirmation, Ordination and the Sacrament of the Sick. The Aumbry was designed by Colm Redmond, the column was carved by Tom Glendon, and the silver screen in a crystal box is the work of Vicki and Denise Donovan.

To the right of the font, the Evangelarium proclaims the Word of God in the Book of the Gospels. This too was designed by Colm Redmond, the column was carved by Tom Glendon, and the interior screens in a crystal glass showcase are the work of Vicki and Denise Donovan. 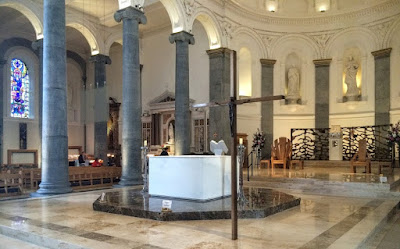 The Carrara marble altar was sculpted by Tom Glendon with marble from the same quarry used by Michelangelo (Photograph: Patrick Comerford, 2016)

The Carrara marble altar was sculpted by Tom Glendon, with all 7½ tons coming from the same quarry as Michelangelo’s statue of David in Florence. The silver tabernacle, created by Imogen Stuart and Vicki Donovan, is based on the design of early Irish reliquaries. Imogen Stuart also worked with Philip O’Neill on the Ambo, and with Brian Byrne on the Sanctuary Cross. 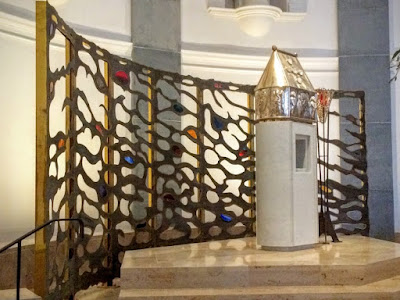 The reredos by Vicki Donovan symbolises the Water of Life (Photograph: Patrick Comerford, 2016)

The reredos behind the tabernacle was crafted by Vicki Donovan in mixed metal and stained glass, and symbolises the Water of Life. 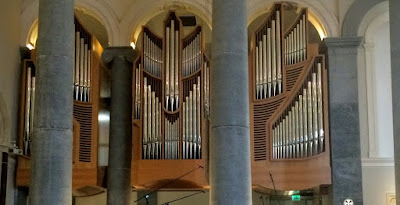 The pipe organ was built by Fratelli Ruffatti from Padua(Photograph: Patrick Comerford, 2016)

The pipe organ, with of 2,307 pipes and 36 stops, was built by Fratelli Ruffatti from Padua, one of the most celebrated organ makers in the world.

The stained glass windows were designed Kim en Joong, a Dominican priest based in Paris who works in light.

The stained glass windows by the Harry Clarke studio in the north transept tells the life story of Saint Anne (Photograph: Patrick Comerford, 2016)

Two stained glass windows by the Harry Clarke studio – Saint Anne (north transept) and the Resurrection (south transept) – were damaged in the fire but were rescued and have been restored skilfully and faithfully. Their deep colours inspired the work of James Scanlon’s western clerestory windows. 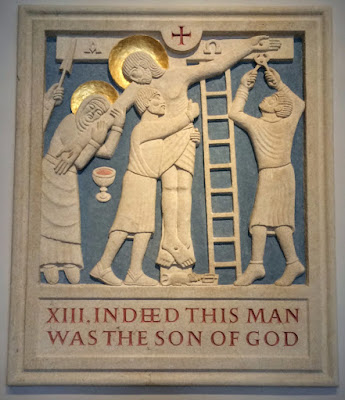 The lettering on Ken Thompson’s Stations of the Cross inspired by the work of Eric Gill (Photograph: Patrick Comerford, 2016)

The 14 Stations of the Cross were carved in Bath Stone with chisel and mallet by Ken Thompson from Co Cork, with lettering inspired by the work of Eric Gill. 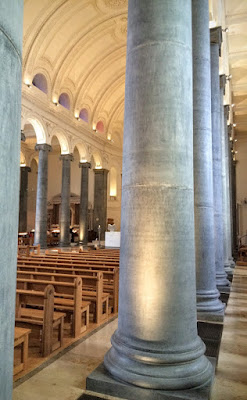 Each massive column weighs 28 stone, and is made from blue limestone quarried in Old Leighlin, Co Carlow (Photograph: Patrick Comerford, 2016)

To mark the fire and the restoration, Father Sean Casey wrote a poem ‘On Christmas Day in the Morning,’ based on John Betjeman’s poem ‘Christmas’:

And is it true? And is it true
This most distressing tale of all,
The vaulted ceiling, mauve and blue,
The baby in an ox’s stall?
The polished stone, the gracious chimes,
Engulfed in flame this Christmas time?

And is it true? For if it is
No organ swell, no voices sing
From pews and lofted galleries,
Their sweet and joyful Christmas hymns,
No fervent prayers, petitions sent,
No sign of peace, so kindly meant.

The Prince of Peace, where will he dwell,
Where lay his head in frosty air?
No soaring tower, no peal of bells
Can with this single Truth compare,
The dwelling that he makes His own
He builds from us – the Living Stones.