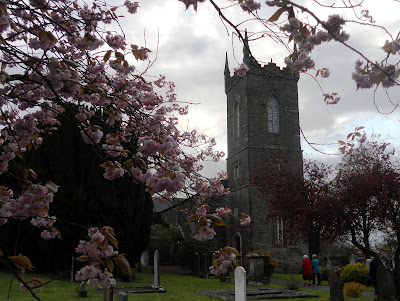 I was in west Wicklow last night for the institution of the Revd Olive Henderson as rector of Donoughmore and Donard with Dunlavin in Saint Nicholas’ Church, Dunlavin.

Dunlavin, on the borders of Co Wicklow and Co Kildare, is an elegant village about 45 km south-west of Dublin, with wide streets and a classical courthouse built in the Doric style.

The 2011 Census figures for the Republic of Ireland show the Church of Ireland (including “Protestant”) population of the Republic is 134,635 (2.9%). We are still awaiting a full breakdown of these figures, but they show a 7.8% increase in Co Wicklow, and the 2006 census showed Co Wicklow is the county with the highest proportion of Church of Ireland members (6.88 per cent). Greystones, Co Wicklow, had the highest proportion of any town (9.77 per cent). There were interesting figures too for the three parishes where Olive is the new rector: Donaghmore (27.3), Donard (7.5 per cent) and Dunlavin (7.4 per cent) form one parochial union in the Diocese of Glendalough.

Traditionally, the Dunlavin area was a centre for pre-Patrician Christianity, with a church story predating Saint Patrick’s arrival in Ireland. The name Dunlavin is associated in legend with Liamhán, a princess from North Leinster who was slain after eloping with a prince from South Leinster. The area was settled even before the arrival of the Celts in the Bronze Age. The stone circles at Castleruddery and Brewel could date from ca 2000 BC, and there was an Iron Age hill fort on Spinan’s Hill, between Dunlavin and Baltinglass.

Traditionally, the Dunlavin area was a centre of pre-Patrician Christianity due to the work of Saint Palladius. He arrived in Wicklow in 431 and his followers established three settlements: Tigroney, near Avoca; the summit of Church Mountain near Donard; and at Cillín Cormac near Dunlavin.

In 1332, Frenistown church, near Donoughmore, was burnt, along with 80 people who had fled to the church for sanctuary from violence. As a consequence, the O’Toole family and their accomplices were excommunicated. But this remained a dangerous area into the 15th century, and Archbishop Michael Tregury of Dublin refused to visit Dunlavin in 1468 because “it lay in the Irish territory on the marches of the Pale so he dared not visit on account of the war in those parts.”

It was left to the family of one of his successors as Archbishop of Dublin to develop the present town of Dunlavin, which is the creation of the Bulkeley family and which owes its existence to their decision to build a new village on a green-field site in the late 1650s.

The lands were acquired by the Church of Ireland Archbishop of Dublin, Dr Lancelot Bulkeley (1568-1650), an Oxford-educated clergyman who was the fifteenth of 18 children in a Welsh family from Angelsey. He came to Ireland in 1613 as Archdeacon of Dublin and became Archbishop of Dublin in 1619. He was jailed in 1647 for resisting the act prohibiting the use of The Book of Common Prayer, and General Ireton confiscated all the wealth of the archbishop a year later. Bulkeley died at Tallaght Castle on 8 September 1650 at the age of 81, and was buried in Saint Patrick’s Cathedral, Dublin. The see remained vacant for eleven years and a new Archbishop of Dublin was not appointed until the Caroline Restoration in 1661.

His son William Bulkeley was the Archdeacon of Dublin throughout the Caroline and Cromwellian eras and remained in office after the restoration (1636-1671). William’s son, Sir Richard Bulkeley (1634-1685), who was born in Tallaght, had the vision and foresight that gave us the present village of Dunlavin. The Fair Green was probably laid out shortly after his successful petition to Parliament to hold markets and fairs in Dunlavin in 1661, and he built a new parish church in 1664, with the main street running from the church to the Fair Green. He also planned a university for Dunlavin, but this was opposed by the Archbishop of Dublin.

Richard Bulkeley was High Sheriff of Co Wicklow in 1660 and was the MP for Baltinglass in 1665-1666. By 1668, Dunlavin had more hearth-taxpayers than any other settlement in west Wicklow. In 1672, he was given the title of baronet, with the territorial designation “of Old Bawn, in the County of Dublin, and of Dunlaven, in the County of Wicklow.”

When Richard died in 1685, the title passed to his son, Sir Richard Bulkeley, 2nd Baronet (1660-1710). The second Sir Richard was educated at Trinity College Dublin and Christ Church Oxford. As a supporter of William III, he was attainted by the Irish Jacobite Parliament, as Sir Richard Buckley, in 1689. He fought at the Boyne, and from 1692 until his death in 1710 he was the MP for Fethard-on-Sea, Co Wexford.

When he died in 1710, the Bulkeley title became extinct. But by then Dunlavin was one of the principal settlements in west Wicklow. The triangular shape of the Fair Green was common to many Irish villages and small towns of the period, and has been described as “the hallmark of early 17th century settlement.” Louis Cullen suggests the Fair Green in Dunlavin constituted the original settlement and is underneath the mid-18th century planned village which was dominated by the square and the market house.

In 1702, James Worth Tynte, a barrister from Co Cork, married Sir Richard Bulkeley’s niece, Hesther, daughter of John Bulkeley of Old Bawn, near Tallaght, Co Dublin. When Sir Richard died in 1710, Tynte inherited the estate and the Tynte family continued to have a long association with Dunlavin for generations. Tynte’s ostentatious lifestyle was reflected in his impact on the village of Dunlavin. 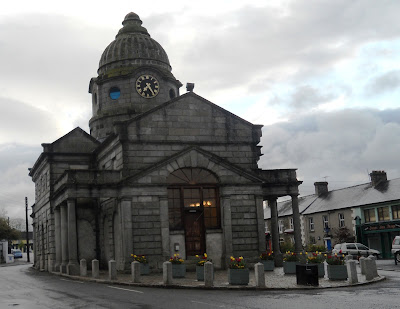 The Market House in Dunlavin, built by the Tynte family in the 1740s, is now used as a library (Photograph: Patrick Comerford, 2012)

Richard Tynte extensively remodelled the village in the 1730s and 1740s, making the fine market house the centrepiece of his village. The market house, built around 1743, was designed by Richard Cassels. Originally a cruciform building, the corners are filled by colonnades. All this is capped by a magnificent, octagonal, stone tower and dome, making it look for all the world like a Viennese church. The former market house remains a landmark building in Dunlavin to this day.

The events of 1798 disrupted any social calm and cohesion that had been brought to Dunlavin, and 36 men were executed on the Fair Green, while more were hanged from the pillars of the market house. 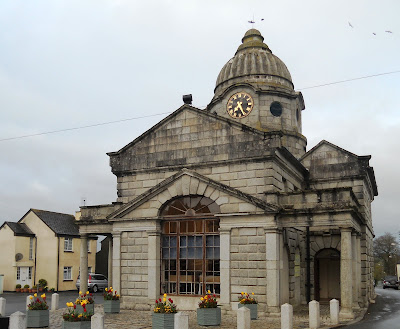 All the archways in the Market House have been closed up, and the building is now used as a library (Photograph: Patrick Comerford, 2012)

In the generation that followed, the Tynte family endeavoured to restored that social harmony, and this was symbolised by their role in building for two new parish churches in Dunlavin, one Roman Catholic the other Church of Ireland and both dedicated to Saint Nicholas of Myra, the original Santa Claus

The Roman Catholic Church was built on land donated by the Tynte family in 1815, while the new Church of Ireland parish church was built with a grant and a loan from the Board of First Fruits at the beginning of the 19th century and was consecrated on 24 October 1817. 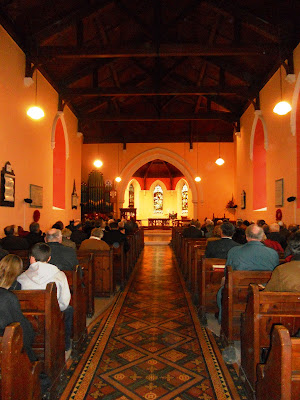 Canon Peter Le Fanu, who was Prebendary and Rector of Dunlavin from 1799 to 1810, was from the same family as the novelist Joseph Sheridan Le Fanu. More recent rectors include Bishop Roy Warke (1964-1967), who later became Archdeacon of Dublin and then Bishop of Cork.

The church at Donard, which claimed roots in the pre-Patrician mission of Saint Palladius, was granted in the Middle Ages to the Hospital of Saint John the Baptist outside Newgate for the support of the sick. The Vicars and Rectors of Donard have included Nehemiah O’Donnell, who was Archbishop of Tuam at the same time.

Last night, Olive Henderson succeeded the Revd Declan Smith as Rector of Donoughmore and Donard with Dunlavin. Before going to Dunlavin, Declan had worked in Zambia, with APCK, APSO and CMS Ireland, and we were both students at the Irish School of Ecumenics and Kimmage Manor. Olive was an NSM curate in Tallaght in the 1990s while I was training for ordination.

Olive is a worthy successor to Jonathan Swift. After her institution last night, we we were invited back to a reception in the Jonathan Swift National School, the Church of Ireland parish school, where the the memory of the creator of Gulliver and his links with Dunlavin continue 300 years later.
.
Posted by Patrick Comerford at 06:00 No comments: