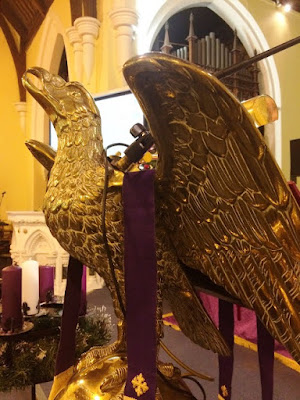 During the past few weeks I have been writing features for a number of publications – including the Church Review (Dublin and Glendalough), the Diocesan Magazine, the Lichfield Gazette and Koinonia in the United States – on Canon Frederick Oakeley from Lichfield and his version of the well-loved Christmas Carol, ‘O Come all ye faithful.’

This was the final carol last night at the Service of Nine Lessons and Carols in Holy Trinity Church, Rathmines, organised by the staff and students of the Church of Ireland Theological Institute.

Earlier in the evening, the choir sang the carol, Gaudete! gaudete! Christus est natus. It was an appropriate carol, as next Sunday [13 December 2015], the Third Sunday of Advent, is Gaudete Sunday.

This year, as part of my spiritual reflections for Advent, I am thinking about Dietrich Bonhoeffer, and his thoughts about Advent and our preparations for Christmas.

But last year, I reflected on an appropriate hymn for Advent each morning, and on Gaudete Sunday [14 December 2014], I chose this carol Gaudete!, which reached No 14 in the charts in England with Steeleye Span in the early 1970s.

I wrote at that time last year of how this song was popular in the early 1970s, and how I first heard it around the same time as I was introduced to English folk rock while I was in the English Midlands and writing for the Lichfield Mercury. Perhaps the story of this carol is worth telling once more.

The notes on the record sleeve say:

Mist takes the morning path to wreath the willows -
Rejoice, rejoice -
small birds sing as the early rising monk takes to his sandals -
Christ is born of the Virgin Mary -
cloistered, the Benedictine dawn threads timelessly the needle’s eye -
rejoice.

Steeleye Span was formed in 1969, and they often performed as the opening act for Jethro Tull. A year after recording Below the Salt, it came as a surprise to many when they had a Christmas hit single with Gaudete, when it made No 14 in the British charts in 1973.

The guitarist Bob Johnson had heard the song when he attended a folk-carol service with his father-in-law in Cambridge, and brought it to the attention of the rest of the band.

This a capella motet, sung entirely in Latin, is neither representative of Steeleye Span’s repertoire nor of the album. Yet this was their first big breakthrough and it brought them onto Top of the Pops for the first time.

It is one of only three top 50 British hits to be sung in Latin. The others are two recordings of Pie Jesu from Andrew Lloyd Webber’s Requiem by Sarah Brightman and Paul Miles-Kingston in 1986, and by the then 12-year-old Charlotte Church in 1998.

Gaudete may have been composed in the 16th century, but may date from the late mediaeval period. The song was published in Piae Cantiones, a collection of Finnish and Swedish sacred songs published in 1582.

The Latin text is a typical mediaeval song of praise, following the standard pattern for the time – a uniform series of four-line stanzas, each preceded by a two-line refrain (in the early English carol this was known as the burden).

The reference in verse 3, which puzzled many fans at the time, is to the eastern gate of the city in Ezekiel’s vision (Ezekiel 44: 2). The gate is a traditional symbol of the Virgin Mary.

Since the mid-1970s, despite the change in their line-up and the loss of names like Maddy Prior and Gay and Terry Woods at different times, Steeleye Span often include Gaudete as a concert encore, and it was published in 1992 in the New Oxford Book of Carols.

Their latest album, The Essential Steeleye Span – Catch Up, was released earlier this year. This double CD looks back at their recent history, including their collaboration with the late Sir Terry Pratchett, and features some of the most memorable moments in their long career, a number of new recordings of their most famous songs, rare and unreleased material, and, of course, Gaudete, from the album Present, which is Track 5 on the first CD.

I missed Steeleye Span’s live concert in Vicar Street, Dublin, last year. They are currently touring Britain on a tour that began in Shrewsbury last month [17 November 2015] and that ends in Saisbury next Thursday [17 December 2015].

The original is here: Gaudete by Steeleye Span.

There are other arrangements by Michel McGlynn, recorded by Anuna, and an arrangement by Bob Chilcott which is part of the Advent and Christmas repertoire of the Choir of Christ Church Cathedral, Dublin.

The time of grace has come
that we have desired;
let us devoutly return
joyful verses.

God has become man,
and nature marvels;
the world has been renewed
by Christ who is King.

The closed gate of Ezekiel
has been passed through;
whence the light is born,
salvation is found.

Therefore let our gathering
now sing in brightness,
let it give praise to the Lord:
Greetings to our King.

Waiting in Advent 2015 with
Dietrich Bonhoeffer (12) 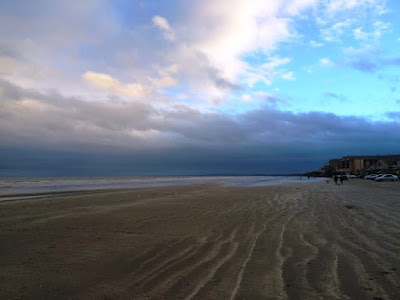 ‘Christ walks on the earth … as the one through whom God calls you’ … walking on the beach in Bettystown, Co Meath (Photograph: Patrick Comerford, 2015)

We are in the second week of Advent, with just two weeks to go to Christmas Eve. Throughout Advent, I am praying and thinking with my own Advent Calendar. As we wait and prepare for Christmas, I am inviting you to join me each morning for a few, brief moments in reflecting on the meaning of Advent through the words of the great German theologian and martyr, Dietrich Bonhoeffer (1906-1945).

In an Advent sermon, Bonhoeffer shares these thoughts:

“Christ walks on the earth as your neighbour as long as there are people. He walks on the earth as the one through whom God calls you, speaks to you and makes his demands. That is the greatest seriousness and the greatest blessedness of the Advent message. Christ stands at the door. He lives in the form of the person in our midst. Will you keep the door locked or open it to him?”