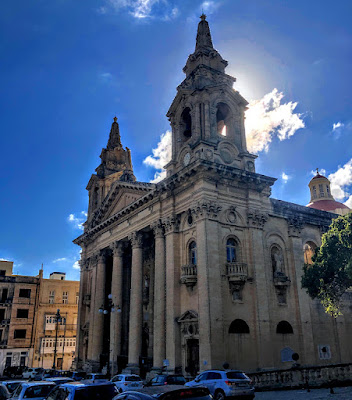 The Church of Saint Publius is the parish church of the suburb of Floriana in Valletta (Photograph: Patrick Comerford, 2022)

I was in Valetta for much of this week, where it seems as though every street – or every second street – inside the walls of the capital of Malta, is named after a saint. I am back in the Rectory in Askeaton, putting the final touches to tomorrow’s services and sermons today. But, before this day begins, I am taking some time early this morning for prayer, reflection and reading.

Tradition identifies this saint with Publius, ‘chief man of the island of Malta,’ who befriended Saint Paul after his shipwreck on the island (Acts 28: 7). According to the Acts of the Apostles, Saint Paul cured Saint Publius’ father of fever and dysentery:

‘Now in the neighbourhood of that place were lands belonging to the leading man of the island, named Publius, who received us and entertained us hospitably for three days. It so happened that the father of Publius lay sick in bed with fever and dysentery. Paul visited him and cured him by praying and putting his hands on him. After this happened, the rest of the people on the island who had diseases also came and were cured. They bestowed many honours on us, and when we were about to sail, they put on board all the provisions we needed.’ (Acts 28: 7-10, NRSVA)

According to Maltese tradition, the conversion of Saint Publius led to Malta becoming the first Christian nation in the West.

Saint Publius became the first Bishop of Malta and later became Bishop of Athens. He was martyred ca 112 under the Emperor Trajan or ca 125, during the persecution of Emperor Hadrian.

Saint Publius is the patron saint of the suburb of Floriana in Valletta, and is also one of the two patron saints of Malta beside Saint Paul.

Saint Publius Church is the parish church of Floriana in Valletta. It was built at several stages between the 18th and 20th centuries. The church was originally part of the parish of Saint Paul of Valletta.

The original design of the church is attributed to Francesco Marandon. The first stone was laid down on 2 August 1733 by Bishop Paul Alphéran de Bussan, in the presence of Grand Master of the Knights of Saint John, António Manoel de Vilhena.

The sacristy was completed seven years later and it began to be used as a small church by the inhabitants of the then newly built suburb of Floriana. The building was completed by 17 January 1768, when the relic of Saint Publius was brought to the church.

The façade of the church began to be rebuilt in 1771, and the dome was built in 1780. It became a vice-parish in 1776, and the church was consecrated by Bishop Vincenzo Labini on 20 March 1792. It became a parish in March 1844, after a decree was issued by Pope Gregory XVI.

The façade of the church consists of a neoclassical portico topped by a triangular pediment, flanked by a bell tower on either side. A statue of Christ the King stands on the top of the façade. The church has a cruciform plan with a dome and a richly decorated interior.

The altarpiece depicting the martyrdom of Saint Publius is the work of Antoine de Favray and his pupil Filippo Vincenzo Pace and dates from 1773. The ceiling is decorated with paintings depicting Saint Paul’s shipwreck and his stay in Malta. Other paintings in the church include works by Giuseppe Calì and Emvin Cremona.

The statue of Saint Publius was completed in 1811 by the sculptor Vincenzo Dimech.

Part of the façade and the dome were destroyed by aerial bombardment during World War II, when it was hit by bombs on 3-4 March and 28 April 1942 and 16 people were killed. The nearby Sarria Church became a temporary parish church until the Church of Saint Publius was reopened on 10 December 1944. Reconstruction was carried out by the architect Gustav Vincenti, and it was completed in the late 1950s. The interior was embellished in the following decades, being fully completed in the early 1990s.

The church is scheduled as a Grade 1 national monument, and it is also listed on the National Inventory of the Cultural Property of the Maltese Islands.

Saint Publius was canonised in 1634. His feast is celebrated on 22 January in the Roman Catholic Church, and on 13 March in the Eastern Orthodox Church.

20 and the crowd came together again, so that they could not even eat. 21 When his family heard it, they went out to restrain him, for people were saying, “He has gone out of his mind.”

The Prayer in the USPG Prayer Diary today (22 January 2022) invites us to pray in these words:

Let us give thanks for religious freedom and the ability to freely practise what we believe. May we remember those living in countries where freedom of belief is restricted. 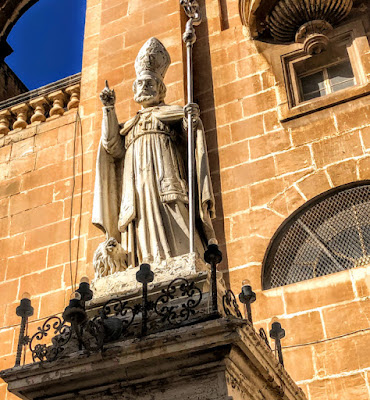 The statue of Saint Publius (1811) is by the sculptor Vincenzo Dimech (Photograph: Patrick Comerford, 2022)