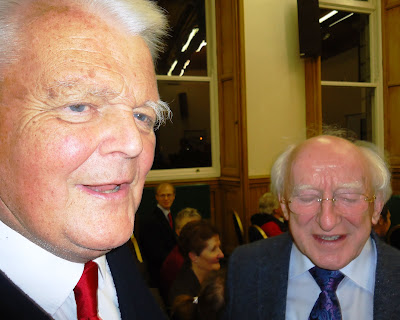 I was in All Hallows’ College, Drumcondra, this evening as President of the Irish Campaign for Nuclear Disarmament (CND) for the presentation of the 2012 Sean MacBride Peace Prize to two Arab activists, Lina Ben Mhenni from Tunisia and Nawal El-Sadaawi from Egypt. Both women have shown great courage and made substantial contributions to the “Arab Spring.”

The awards were presented by President Michael D. Higgins at a ceremony on the eve of the annual conference of the International Peace Bureau.

The Irish Nobel Peace Prize laureate, Sean MacBride, was President of both the International Peace Bureau and Irish CND, and President Higgins was the first recipient of Sean MacBride Peace Prize 20 years ago at a ceremony in the Mansion House in Dublin in 1992.

This is the first year the IPB council has met in Ireland in its over 100-year history. The conference is being hosted by Afri which, like Irish CND, is a member of the International Peace Bureau.

Every year, the IPB awards the prize to a person or organisation that has done outstanding work for peace, disarmament and or human rights.

This year’s medals have been made from recycled metal from US nuclear missile parts.

Dr Nawal El-Sadaawi, who was unable to travel to Ireland for this evening’s presentation, has a long and impressive record of several decades of activism and professional engagement on behalf of women’s rights in Egypt.

A feminist writer, activist, physician and psychiatrist, she has written many books linking political, economic, sexual, and religious oppression of women and the poor. Her writing has had a deep impact on successive generations of young women and men over the last five decades.

However, Dr Lina ben Mhenni from Tunisia was in Dublin this evening to receive her medal. She is an internet activist, a blogger and lectures in linguistics at Tunis University. During the rule of President Zine el-Abidine ben Ali, she was one of the few bloggers to write using her real name rather than adopting a pseudonym to protect her identity.

She began posting photographs and videos of protests and of injured protesters throughout Tunisia, visited local hospitals and took photographs of activists injured by the police. She continues to play a prominent role among Tunisia’s democracy activists, speaking out against corruption and demanding the release of arrested activists. 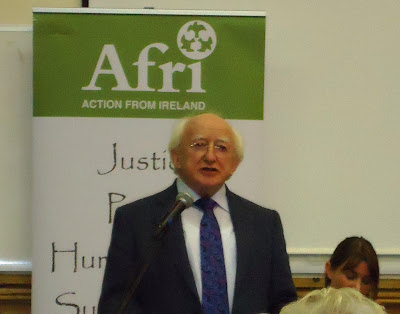 I have known President Higgins since 1973, and we have shared many causes and protests. It was a proud moment for Irish peace activists when he presented the prizes this evening, including Caitriona Lawlor, who worked for many years with Sean MacBride, Brendan Butler, a long-time activist on Central American rights, David Hutchinson-Edgar of Irish CND, Roger Cole of the Peace and Neutrality Alliance, Joe Murray of Afri, Tony D’Souza of Pax Christi, and Rob Farmichael, the nonviolence activist.

The evening ended in conversation with President Higgins and the veteran international peace activist, Bruce Kent, who has been a personal friend for almost 40 years.

This evening’s news from Gaza and Israel is a sharp reminder that the world needs peace activists today as much as it ever did. 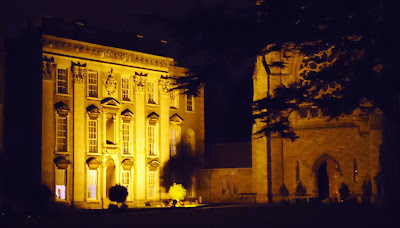 Drumcondra House, at the heart of All Hallows’ College, in this evening’s lights (Photograph: Patrick Comerford, 2012)

Posted by Patrick Comerford at 21:20 No comments: