Wexford is looking good in
autumn and harvest colours 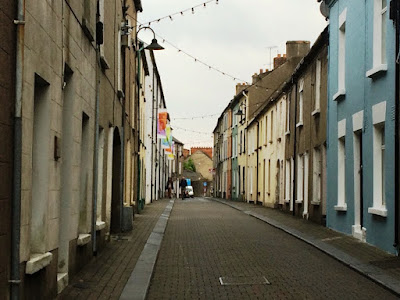 High Street, Wexford, where I lived in the mid-1970s, is preparing for this year’s Opera Festival (Photograph: Patrick Comerford, 2015)

Wexford was looking good today. Despite what Laurence Mackin said in TheIrish Times earlier this week. In his review following the first episode of Billy Roche’s Clean Break on RTÉ last Sunday, he wrote:

“Wexford itself looks bleak and suffocating; ambition and hope are in short supply in the autumnal tones of Anna Valdez Hanks’s photography and Gillies McKinnon’s direction. And there is something menacing in the everyday emptiness of much of what we see.”

Certainly summer had turned to autumn today, and the ‘Indian Summer’ we have been enjoying all week turned to a hazy, cloud-filled day. But I though Clean Break was complimentary to Wexford, to the point that I even felt a little homesick for the town.

Over 40 years ago, when I was living in High Street, Wexford, and working for the Wexford People, Billy Roche was involved in the Roche Band, and he took part in the poetry and music evening’s I organised in the YMCA beside White’s Hotel on North Main Street.

At the time, the YMCA was effectively the Church of Ireland parish hall in Wexford, and a generous rector, the late Canon Eddie Grant, gave me almost free rein when it came to inviting aspiring poets and musicians to these evenings.

The YMCA has been sold and transformed, and is now home to boutique shops and a restaurant. But Billy Roche, who is now 66, is still on the scene and proud of his home town, and we still bump into each other every now and then.

Billy Roche hopes his new RTÉ four-part tiger kidnapping crime drama will put Wexford on the map and recently he told the Nationwide reporter Helen McInerney that it is important for him that parts of the series were filmed in Wexford. 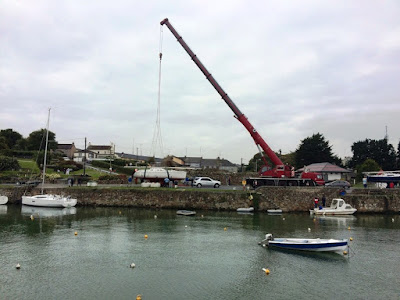 Being a little homesick, two of us decided to head back to Wexford this morning, and stopped first in Courtown for a walk around the harbour. The harbour was a hive of activity late this morning as boats were being lifted by a heavy crane.

Initially, I thought they were being moved to dry dock for winter. But later I learned that Courtown Harbour is being sealed off and drained for emergency repair works on the piers and walls and the harbour basin is deepened.

The €2 million project was postponed from the height of the summer season because of the fears on the part of local business owners and fishermen of the impact on summer trade. 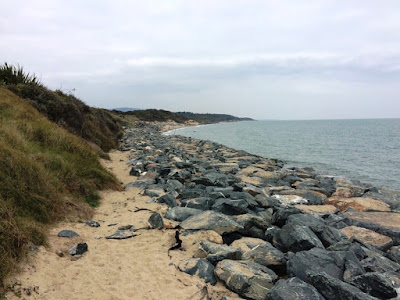 The beach at Courtown has been badly eroded in recent storms (Photograph: Patrick Comerford, 2015)

The work must begin by the end of November, and local businesses are deeply worried about the impact on the life of the town. Most of the beach in front of the harbour has been washed away because of heavy storms last year, and for the past few months sections of Courtown Beach have been cordoned off for rock armour reinstatement.

The work on the harbour is work that cannot be postponed, local people say both piers are close to collapsing, and the basin has filled up with silt.

Courtown Sailing Club went ahead with lifting its boats today, and some owners were their boats to Arklow before the harbour closes. But local fishermen are said to be worried about their livelihoods. 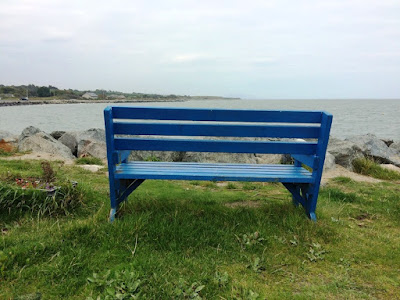 Blues of Greece and reminders of summer at Cahore Pier (Photograph: Patrick Comerford, 2015)

After double espressos in the Wishing Well Café in Courtown, we travelled along the coast to Cahore Point, where we watched children “crabbing” for a while, and walked along the pier. 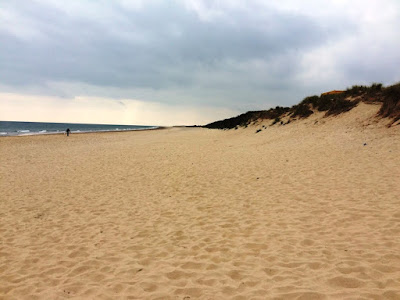 The long white stretch of sand at Morriscastle in Kilmuckridge this afternoon (Photograph: Patrick Comerford, 2015)

Our next stop was Kilmuckridge, for a walk along the long sandy beach at Morriscastle. It is some years since I had summer breaks there.

At lunchtime, there were few people on this long white sandy beach which stretches for miles. In hot summer days it rivals any beach in Mediterranean, but here, once again, local people are afraid that unchecked farming practices threaten the sustainability of the sand dunes which protect this long stretch of coast. 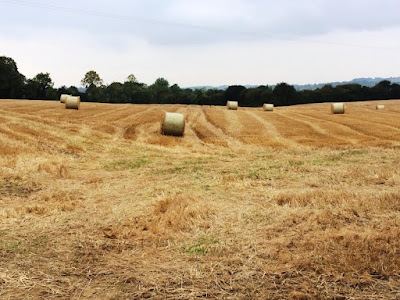 Harvest fields of green and gold between Kilmuckridge and Kilnamanagh this afternoon (Photograph: Patrick Comerford, 2015)

We rejoined the road to Wexford at Kilnamanagh, and as we drove on the fields and farms of Co Wexford were a rich mixture of green and gold in this late harvest season, despite the clouds above.

Eventually, we reached Wexford by mid-afternoon, and enjoyed a few hours strolling through the narrow streets, browsing in the bookshops and bumping into old friends here and there. The town was looking well this afternoon, enhanced perhaps by preparations for the Opera Festival later this month. 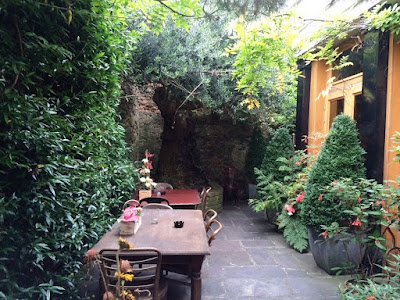 The courtyard in The Yard in George’s Street, Wexford (Photograph: Patrick Comerford, 2015)

Sadly, one of my favourite restaurants in Wexford, La Dolce Vita in Trimmer’s Lane, has closed its doors, the restaurant in the Opera House on High Street was closed this afternoon, and The Yard in Lower George’s Street had not yet opened its doors … although we were offered a warm welcome. 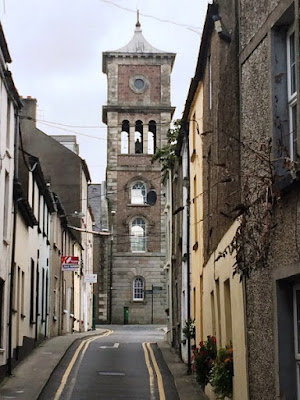 Looking up Mary Street towards the Friary in Wexford this afternoon (Photograph: Patrick Comerford, 2015)

Eventually, we had a very late lunch in the Centenary Stores on Charlotte Street. By the time we left, dusk was beginning to fall, but we still stayed around Wexford for a little longer.

As we drove through Ferrycarrig and Oylegate, the fields around us were still aglow in green and gold, but the sun was setting in west beyond the Slaney, and it was dark by the time we reached Edermine. I was home in time to see the England v Australia match.

The Crescent in Wexford … the town was looking well this weekend (Photograph: Patrick Comerford, 2015)