A walk on the beach in Dugort in the dark 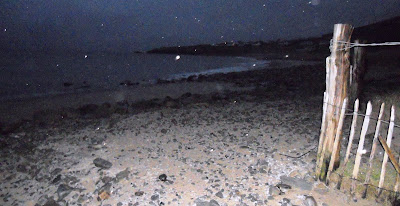 On the sands of the strand in Dugort in the dark last night (Photograph: Patrick Comerford, 2012)

After two busy days in Ballyconnell, Co Cavan, on Friday and Saturday at the conference organised by the House of Bishops, I was looking forward to a walk on the beach yesterday (Sunday) afternoon.

I joked on Sunday over lunch that in the space of ten days I had travelled on the road between Virginia and Belturbet alone six times in four different cars. So, a walk on the beach seemed not just a good idea, but a necessary exercise for body, mind and soul.

However, an old friend in Achill Island died at the end of the last week, and when I realised that his funeral was on Monday morning, I had to go to the removal in Achill on Sunday evening or miss altogether the opportunity to say a last farewell to Martin Walsh.

Martin was in his 90s when he died last week. He was one of the “old-timers” and was the oldest man living in Dugort, and one of the oldest men on the island.

I’ve known Martin for over 30 years, since I first started visiting Dugort in 1980 and staying in the Strand Hotel.

For many years, Dugort was one of my favourite boltholes, retreating there, when I needed time to think, to write and to be creative. In winter, without a dial telephone on the island, I was inaccessible; in summer, when the island basked in sunshine with its whitewashed cottages, golden beaches, and blue skies and the blue seas, it was like an Aegean island in Greece.

And Martin was always part of the hospitality and the warm welcome, making sure the Strand Hotel was always available, even in the depths of winter. He was kindness in every way, and a gentleman in true sense of the word. 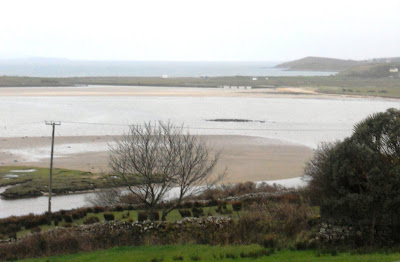 Looking out on the sands at Mulranny at dusk yesterday (Photograph: Patrick Comerford, 2012)

It was a 650 km round-trip for two of us yesterday. We left Dublin just after 2 p.m., and stopped briefly to take in the sweeping majesty of the sands and the beaches at Mulranny. How often have I had promised myself a walk on the beach there? But in my desire to press on to Achill I never stopped long enough.

But dusk was beginning to descend, and time was not in our favour. We pressed on again yesterday and we were at Ted Lavelle’s funeral home in Cashel just after 6.

From Cashel, we allowed ourselves a diversion, and drove up through Bunacurry and the Valley, stopping below Martin’s House to take in the view of the beach at Dugort. Although it was dark by now, and the tide was in, we could still see the magnificent arc-shaped strand beneath us. We drove down to the Strand Hotel, parked, and gave ourselves the joy of a five-minute walk in the sands in the dark.

We were in Dookinella for the removal and reception at 7.30 last night. 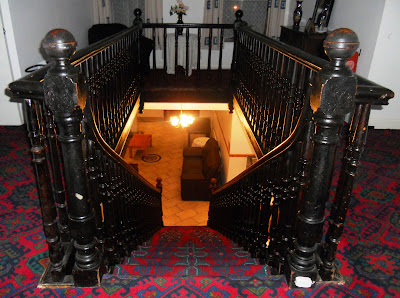 The old stairs in the Strand Hotel, Dugort … this hotel has been a favourite retreat for writing and thinking (Photograph: Patrick Comerford, 2012)

Afterwards, we had a half-hour stopover back in the Strand Hotel, where we got a warm welcome from Billy Scott. It’s almost three years since I was last there, but it could have been last week.

There was a warm offer of hospitality for the night. But we had to press on, and we were soon back out on the road again, facing another 315 km to Dublin, with Fleetwoood Mac, Eric Clapton, Jimi Hendrix, Bob Dylan, Derek and the Dominoes, the Doors, Van Morrison, Think Lizzie, the Rolling Stones and Leonard Cohen for company.

We were back in the early hours of this morning (Monday).

They buried Martin early this afternoon in the old cemetery in Slievemore.

And now I’m packing once again, preparing to fly to Edinburgh tomorrow morning (Tuesday).
Posted by Patrick Comerford at 18:30 No comments: 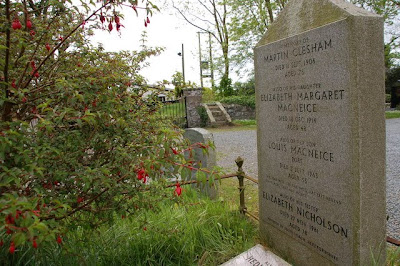 Louis MacNeice was buried with his mother, his sister and his grandfather in Carrowdore Churchyard, Co Down (Photograph: Albert Bridge)

Frederick Louis MacNeice (1907-1963) was an Irish poet and playwright. He was part of the generation of the “’30s Poets,” who included WH Auden, Stephen Spender, and Cecil Day-Lewis.

Louis MacNeice was born in Belfast in 1907, the youngest son of Bishop Frederick MacNeice and Elizabeth Margaret (‘Lily’) MacNeice, both originally from Co Galway.

When Louis MacNeice was six, his mother was admitted to a Dublin nursing home and she died in 1914 when he was seven. He would later blamed her illness and subsequent death on his own difficult birth.

MacNeice was educated at Sherborne and at Marlborough, where he was a contemporary of John Betjeman and shared a study with Anthony Blunt, and at Merton College, Oxford. At Oxford, MacNeice first met WH Auden, Stephen Spender and Cecil Day-Lewis. Auden became a lifelong friend and inspired MacNeice to take up poetry seriously.

After graduating with a first-class BA in Classics, he was appointed Assistant Lecturer in Classics at the University of Birmingham. His writing brought him to contact with the leading poets of the day, including WB Yeats, who included him in the The Oxford Book of Modern Verse, and TS Eliot, who published several of his poems in The Criterion.

MacNeice later lectured in Cornell and throughout the US, and worked for the BBC, producing plays and reporting from India, Egypt, Ghana and South Africa, and in the 1950s was Director of the British Institute in Athens, where he became friends with Patrick Leigh Fermor. He died of pneumonia in 1963, aged 55, and was buried in Carrowdore Churchyard in Co Down, with his mother, his sister and his grandfather. Auden gave a reading at his memorial service.

For my Poem for Lent this morning, I have selected ‘Autobiography,’ by Louis MacNeice. This is one of 11 poems he wrote during a week’s convalescence from peritonitis on an island in Connecticut in August and September 1940, and it was published in his Selected Poems. The themes of isolation and the collapse of intimate relationships are appropriate thoughts to ponder during Lent.

In this poem, which is one of MacNeice’s finest, he bites back his memories of pain following his mother’s death, some would say without self-pity, others say with an undertone of anger. With its haunting refrain – “Come back early or never come” – this is a haunting poem about the tragic death of the poet’s mother, a loss he never fully came to terms with, and one that cast a long shadow over him for the rest of his life.

This refrain is not one of reassurance, but one of wounded ultimatum that punctuates the poem as it moves from an evocation of the beloved mother,

into the nightmare of the aftermath of her death:

The poem’s simple but formal structure of eight rhyming couplets, each separated by the refrain, conceals a wealth of feeling that grows in intensity as the poem develops. The refrain expresses regret, request, command, plea, prayer, and even resignation, for he knows that his idyllic childhood can never be recaptured.

MacNeice was an agnostic, but the refrain still has the yearning, incantatory quality of a liturgical response or prayer found, for example, in the Litany in the Book of Common Prayer.

Stanza 1 recalls MacNeice’s happy childhood, when trees were green and the sun was shining.

Stanza 2 recalls how, after his mother’s death, MacNeice’s father immersed himself in his work, preaching every Sunday in his parish church. But the young MacNeice, while he appreciated the power and beauty of his father’s sermons, found church and religion a terrifying experience. We have here an economical portrait of the Revd Frederick MacNeice, Rector of Saint Nicholas’s, Carrickfegus, and later Bishop of Connor, Down and Dromore. As a child, Louis MacNeice was in awe of his father, and in his posthumously published autobiography, The Strings Are False, admits to being afraid of his father’s “conspiracy with God.”

David Fitzpatrick, in his new biography of Bishop MacNeice, explores the unusual political stance of the poet’s father: he championed Home Rule, although most of colleagues in Northern Ireland were Unionist in their politics. In more than one way, the poet could say:

My father made the walls resound
He wore his collar the wrong way round.

Stanza 3 captures the close intimacy of his relationship with his mother, while the security and warmth she symbolises is conveyed in her “yellow dress.”

In Stanza 4, the “green” and “yellow” of youth and life turn to the “black” of death and the unknown.

He becomes lonely, isolated and reserved, and is thrown back on his resources.

In Stanza 5, MacNeice recalls how his father was plunged into grief and despair by the death of his wife, and spent agonised, sleepless nights mourning for her. This “black” father – darkened by death and a depression that is emphasises by his clerical black clothes – becomes the dark lamp by his son’s bed, replacing the warmth and solidity of the mother in her yellow dress:

The parallel structures in Stanzas 6 and 7,

coupled with the repeated refrain, suggest the pain and loneliness of the child.

The final stanza records MacNeice’s response to the world of uncertainty. He turns his back on a world that has been rejected him. But Fitzpatrick points out that it was not the mother’s help (Margaret McCready) or the poet’s father who failed the litte boy as he shivered in the dark, but his mother. “It was ‘the dead’ that ‘did not care’, that were not there, that did reply, that left the child to ‘walk away alone’.”

Significantly, MacNeice later spent most of his life in self-exile in England. But he never lost a sense of his Irish identity and has inspired many Irish poets, including Paul Muldoon, who gives him a prominent place in the Faber Book of Contemporary Irish Poetry, and Michael Longley, who has edited two selections of his work. Paul Muldoon and Derek Mahon have both written elegies for MacNeice.

In my childhood trees were green
And there was plenty to be seen.

My father made the walls resound,
He wore his collar the wrong way round.

When I woke they did not care;
Nobody, nobody was there.

When my silent terror cried,
Nobody, nobody replied.

I got up; the chilly sun
Saw me walk away alone.