Mediaeval mayhem and murder ... after a walk on the beach 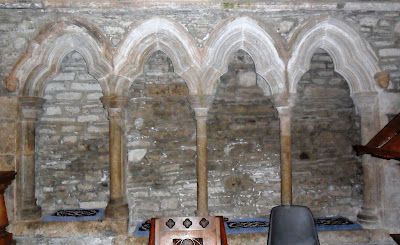 I was in Co Carlow last night for the installation of my former colleague, the Very Revd Tom Gordon, as Dean of Saint Laserian’s Cathedral in Old Leighlin, and his commissioning by the Bishop of Cashel and Ossory as diocesan adult education adviser.

Saint Laserian’s is a delightful 13th century Gothic cathedral that looks at once like both a castle and a church, without sophistication or grandeur, hidden away beyond Bagenalstown and Leighlinbridge.

In his sermon, the Revd Dr Adrian Empey regaled us with tales of mayhem and murder in mediaeval Leighlin.

Aubrey Gwynn and R.N. Haddock painted a charming image of life in late mediaeval Leighlin when they quoted a description of Bishop Nicholas Maguire. It was said that he “studied at Oxford, although it was but 2 years and 3 months, yet he profited so much in logik, philosophie, the seven liberall sciences and divinitie that in his latter days he seemed to excel.” It was said he “was noted for his hospitality and the number of cows that he was able to graze without loss (so well was he beloved) upon the woods and mountains ...”

Less well beloved, it seems, was Bishop Matthew Sanders. The story is told that although Bishop Sanders was “an eloquent preacher and a man of unsullied life,” he was murdered in 1549 by Archdeacon Maurice Kavanagh, whom he had reproved for misconduct. The bishop was buried in the cathedral and the archdeacon and his accomplices were hanged on the site of the murder. When the cathedral was being repaired three centuries later in 1848, the bishop’s skull was discovered, with forensic evidence of his murder – a piece was missing from the left side of the skull.

In my search last night I was unable to find another reminder of our frailty and mortality said to be inscribed in a 16th century memorial on the floor in the chancel that has the words: “O all you who pass by, remember us, I beseech you. We were what you are; and what we now are you will sometime be.” 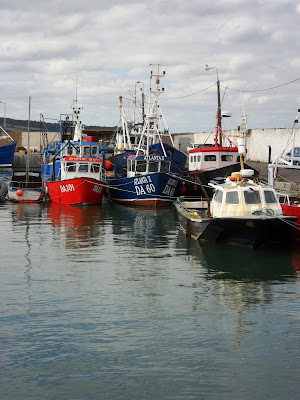 Calm after a storm ... the harbour in Skerries yesterday (Photograph: Patrick Comerford, 2010)

Earlier in the day, I led Morning Prayer and preached in Kenure Church Rush, and preached and celebrated the Eucharist in Holmpatrick Parish Church in Skerries.

Despite the onset of autumn, there was strong sunshine as I sat out for lunch in the Olive in Skerries before going for a walk on the beach. The tide was almost in and the shoreline was still showing the effects of the storm last Thursday night.

As I reached Red Island, I realised the last swim of the season was about to take place. A large number of had set off from the steps opposite the rugby club in Holmpatrick and, accompanied by kayaks and small boats, they had braved the cold waters to swim across to Red Island in order to raise funds for the Skerries Lifeboats.

On the other side of Red Island, a large number of yachts and sailboats were out at sea. It was cheering to see so many people taking advantage of the calm after the storm and the lingering autumn sunshine.

Then it was a call into Gerry’s to buy the Sunday newspapers before heading home and setting out for Old Leighlin.