A Rhino in the River and sunshine by the Dodder 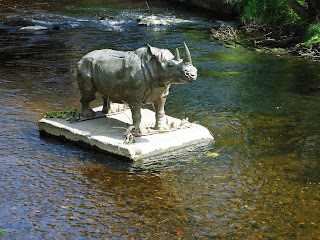 The Rhino in the River in Milltown this afternoon (Photograph: Patrick Comerford, 2013)

One busy week has followed another, with General Synod last week and a full working week this week. And now I’m facing a full working weekend. Although the academic year is coming to an end, marking, reading and assessments are likely to continue for another few weeks.

So, in one of the few bursts of sunshine we have had so far this week, it was good to take an hour or two off at lunchtime today and to meet an old friend who now lives in Kinston on Thames

Our fathers worked together and in our late teens we were both studying to be chartered surveyors. We have been friends now for over 40 years, and meet each other either in Ireland or England a few times each year.

The Dropping Well in Milltown is just a 15-minute walk from where I work, and after lunch the sun was still shining, offering the inviting opportunity to walk back to work along the banks of the River Dodder from Milltown to Churchtown.

Below the bridge behind the Dropping Well, a bronze sculpture of a life-size Rhino that appeared overnight in the River Dodder one night in 2002 still stands midstream in the flowing water.

No one has admitted responsibility for the bronze beast, and the pub’s owners continue to deny any links with the Rhino, management organized a competition to find a name for the beast. 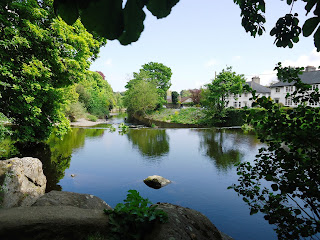 The River Dodder at Churchtown in this afternoon’s sunshine (Photograph: Patrick Comerford, 2013)

Further along the river banks, a few people were taking babies and dogs for walks in the early afternoon sunshine, and one or two men were trying to fish in the river.

The sanctity of the sunshine was gone within a quarter of an hour. But I felt more relaxed.

As I look at the traces of orange and pink lingering in the sky after this evening’s sunshine, I hope we have a few more bursts of sunshine during the weekend. They would bring joy to tomorrow evening’s barbeque and offer the possibility of a cheery walk on a beach on Sunday afternoon. 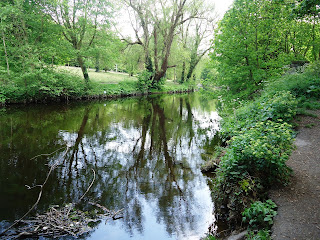 Blue skies and trees reflected in the River Dodder near Rathgar this afternoon (Photograph: Patrick Comerford, 2013)

Posted by Patrick Comerford at 22:18 No comments: