From Avondale to Ardavon, visiting
Parnell’s home and a ruined house 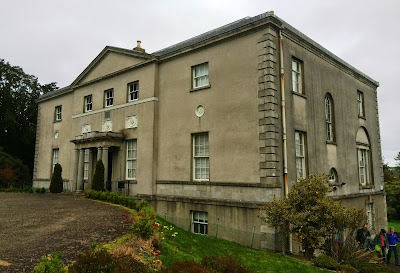 The extended bank holiday weekend has come to an end, the clocks have gone back, and although some leaves are clinging to the trees and the weather was still in the high teens this afternoon, autumn is visibly turning to winter.

Two of us planned to use this extra one-day holiday for a walk on the beach at Bray, Co Wicklow. But as we drove towards Bray this afternoon we were caught up in listening a documentary on Leonard Cohen by John McKenna on RTÉ.

We kept driving south through the Wicklow hills as we listened, and decided instead, as the programme came to an end, to visit Avondale House, the birthplace and home of Charles Stewart Parnell (1846-1891) near Rathdrum. 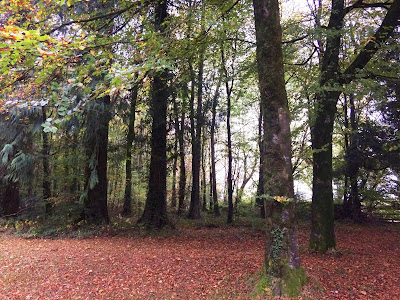 Avondale House, with the Charles Stewart Parnell Museum, is set in a magnificent forest park of over 2 sq km (500 acres) with tree trails and walks, with trees from all over the world and the tallest collection of trees in Ireland.

This fine Georgian House was designed by James Wyatt (1746-1813), who was born at Weeford, on the southern edges of Lichfield, and was engaged in the restoration of Lichfield Cathedral in 1788-1795.

Avondale House was built earlier in 1777-1779 for Samuel Hayes, a barrister who was also an expert on forestry and a pioneer of the re-afforestation of Ireland. At the same time, Wyatt was designing Farnham House near Cavan for the Maxwell-Barry family of Newtownbarry (Bunclody), Co Wexford, and he also designed Curraghmore House near Portlaw for the Beresofrd family, Marquesses of Waterford.

Hayes planted many thousands of trees on the estate. In 1795, he bequeathed Avondale House to his friend and fellow MP Sir John Parnell, and Sir John Parnell’s great-grandson Charles Stewart Parnell was born there in 1846. 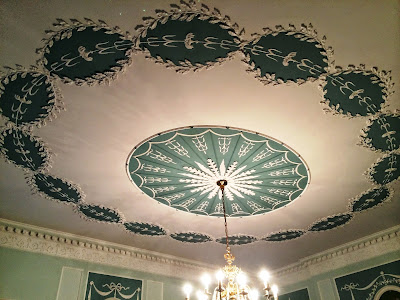 The interior stucco decoration in Avondale House is the work of the Francini brothers (Photograph: Patrick Comerford, 2014)

Inside, Avondale House has fine stucco plasterwork by the Francini Brothers and many original pieces of furniture. The American Room is dedicated to Admiral Charles Stewart (1778-1869) – Parnell’s grandfather who commanded the USS Constitution during the 1812 war.

Parnell studied at Magdalene College, Cambridge from 1865 to 1869. However, the estate he inherited from his father was in poor financial circumstances. Because of this, he was often absent from Cambridge and never completed his degree. But at home he was an improving landowner who was also interested in mining and industrialisation as ways of bringing economic development to the area. 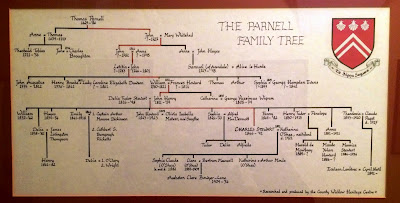 The family trees in Avondale House recognise the place of Katherine O’Shea in the family (Photograph: Patrick Comerford, 2014)

Parnell was known as the “Uncrowned King of Ireland” until his affair with Katherine (‘Kitty’) O’Shea was made public when he was named as the co-respondent in a divorces case and brought about his downfall as the leader of the Irish Parliamentary Party.

He died a broken man at the age of 45 in Hove, near Brighton, on 6 October 1891, but the exhibits in Avondale House show clearly his love for the women he married shortly before his death, and the family trees on the walls clearly name her and their three children.

After his death, the Parnell estate was sold to a Dublin butcher who felled most of the trees to recoup his investment.

The woodlands were renewed in 1904 when the estate was sold to the government. The house was used as a forestry school and the grounds planted with a great variety of trees, the most successful being conifers from the Pacific coast of North America. The grounds also boast specimens of giant redwoods from California and Sitka spruce from British Columbia. 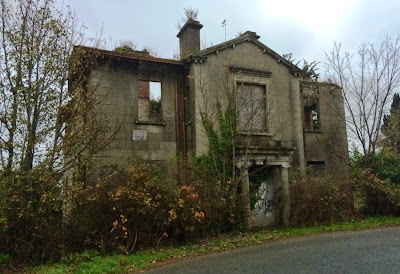 Ardavon House is in a sad state of decay … at one time the Comerfords’ Ardavon House and the Parnells’ Avondale House bookended the village of Rathdrum (Photograph: Patrick Comerford, 2014)

Avondale House is about 1.5 km outside Rathdrum. At the other end of the village stands Ardavon House, Rathdrum, Co Wicklow, home to generations of the Rathdrum branch of the Comerford family. It is as though the village is bookended between Avondale House and the Parnell Estate, with the Church of Ireland parish church, at one end, and Ardavon House, the Comerford mills and the Roman Catholic parish church at the other end.

So, from Avodale we made our way through Rathdrum to Ardavon House, which had once been home to James Charles Comerford (1842-1907), a friend and political ally of his neighbour, Charles Stewart Parnell.

On 15 December 1881, when the Land League organised a day of demonstrations and actions in support of Parnell by calling on people to plough and manure his fields at Garrymore, near Rathdrum, and at Avondale, Comerford gave his mill workers in Rathdrum and Laragh the day off to take part. 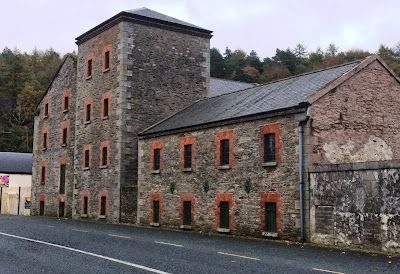 The Comerford mill in Rathdrum burned down in June 1885, but was rebuilt and the business was flourishing a year later in June 1886 when the Comerfords hosted a visit by British and Irish millers.

A year after Parnell’s death, on 7 September 1892, James Charles Comerford married Eva Mary Esmonde (1860-1949), daughter of Lieutenant-Colonel Thomas Esmonde (1831-1872), who was decorated with the Victoria Cross for his role in the Crimean War, when was the first British officer to enter Sebastopol after the siege. Colonel Esmonde was a younger brother of Sir John Esmonde (1826-1876) of Ballynastragh, Gorey, Co Wexford, and Glenwood, Rathdrum, Co Wicklow, Liberal MP for Waterford (1852-1876). Eva Mary (Esmonde) Comerford was three times tennis champion of Ireland. 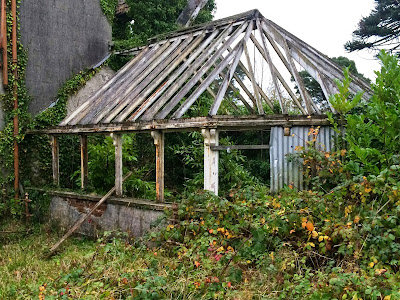 The former orangery at Ardavon House … is it long past repair? (Photograph: Patrick Comerford, 2014)

Ardavon House was home to this branch of the Comerford family until 1958 when it was acquired by the Wicklow County Vocational Education Committee (VEC). It was a school until the end of 1991 when it was replaced by the newly built Avondale Community College.

Ardavon House was badly destroyed in a fire in 1997. Despite local authority undertakings to rebuild it, the house stands derelict today (2014), a sad reminder of former days.

Brendan Behan’s brother Dominic Behan once wrote a song about Parnell’s former home that has been recorded by Mary Black, Christy Moore, the Dubliners and others:

Long years that green and lovely vale
Has nursed Parnell, our grandest Gael
And cursed the land that has betrayed
Fair Avondale’s proud eagle.

We left Rathdrum as evening shadows were falling and the tall trees whispering, feeling Parnell’s memory was honoured at Avondale but the memory of his close friends at Ardavon has been betrayed. 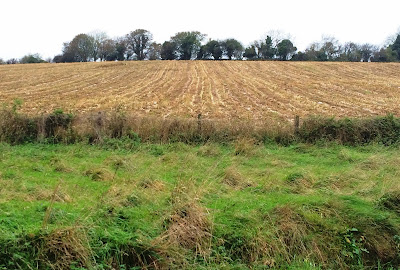 Autumn colours in the fields at Avondale near Rathdrum this afternoon (Photograph: Patrick Comerford, 2014)