Fox News gets it wrong yet again,
about the CIA as well as Birmingham 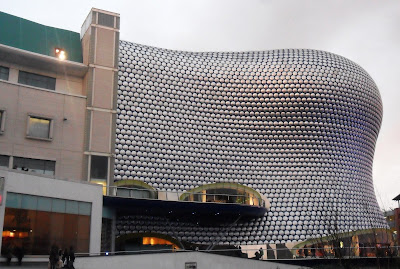 Selfridges in the Bullring is an architectural symbol of modern Birmingham (Photograph: Patrick Comerford)

Now another so-called expert, Wayne Simmons, has shown how unreliable Fox News is when it comes to explaining what is going on in the world.

Wayne Simmons, who has been a regular Fox News commentator, claimed to have worked for the Central Intelligence Agency for almost three decades. But he was arrested two days ago [15 October 2015] for allegedly fabricating his experience with the CIA.

CNN Money has reported that Simmons appeared in court on Thursday, where he faced charges of major fraud against the United States for falsely claiming to be a former “outside paramilitary special operations officer” – a padded resume that federal officials said he used to gain government security clearances.

This frequent guest on Fox News was often described by the channel as a “terrorism analyst” and former CIA operative. He would routinely issue outlandish and false claims on national security matters, including his assertion that there are “19 paramilitary Muslim training facilities” in the US.

In this week’s indictment, federal agents said they also believe Simmons had a “significant criminal history, including convictions for a crime of violence and firearms offenses, and is believed to have had an ongoing association with firearms notwithstanding those felony convictions.”

Other charges include wire fraud and making false statements to the government.

According to CNN, a Fox spokesperson said Simmons “was never a contributor for Fox News,” and that he only appeared on the network as an unpaid guest.

So much for truth, reliability and credibility when it comes to Fox “News”.

The same channel managed to demonstrate no embarrassment last January about Steve Emerson, the founder of the self-styled “Investigative Project on Terrorism,” who has been called to testify as an expert witness called to at least one US Congressional committee.

He was supposed to be offering Fox News his expertise on the attacks in Paris in Januaru. Instead, he launched into an amazing “expert” account of dangerous parts of Britain being controlled by Muslims, giving details of “no-go zones” in France, Belgium, Britain and many other parts of Europe.

Some expert. As more than a million people marched through Paris in a show of unity after the attacks in France, he told Fox news that Birmingham is a “country within a country” and he agreed with the programme presenter Jeanine Pirro that England’s second city is a “caliphate.”

He told his American viewers that Europe is not doing enough to combat the rise of Islamic extremism. “You basically have zones where sharia courts were set up, where Muslim density is very intense, where the police don’t go in, and where it’s basically a separate country almost, a country within a country,” this self-styled “expert” claimed.

Emerson said these no-go zones are in London and Birmingham, and claimed police brutality against non-Muslims is common place: “And parts of London, there are actually Muslim religious police that actually beat wound seriously anyone who doesn’t dress according to Muslim, religious Muslim attire.”

“So there’s a situation that Western Europe is not dealing with,” he claimed.

But it is even worse in Birmingham, he claimed. There, he said, is an entire city where non-Muslims are not welcome. He states: “And in Britain, it’s not just no-go zones, there are actual cities like Birmingham that are totally Muslim where non-Muslims just simply don’t go in.”

His claims have amused, amazed and bewildered people living in Birmingham. Many took to Twitter, starting an hilarious hashtag #FoxNewsFacts.

Emerson later apologised, saying he had “made a terrible error for which I am deeply sorry.”

He went on to say: “There was no excuse for making this mistake and I owe an apology to every resident of Birmingham. I am not going to make any excuses. I made an inexcusable error. And I am obligated to openly acknowledge that mistake.”

But the damage had been down, and what he said is probably going to be believed and repeated as fact by gullible viewers. He has added fuel to the fire and doubtlessly helped to stoke Islamophobia in America.

I am visiting Birmingham next week for a mission meeting in the city centre, before going on to Lichfield. I am not going to be listening to Steve Emerson, Wayne Simmons, or any other “experts” on Fox News on my way.

Oscar Wilde’s childhood home
in Bray is being restored 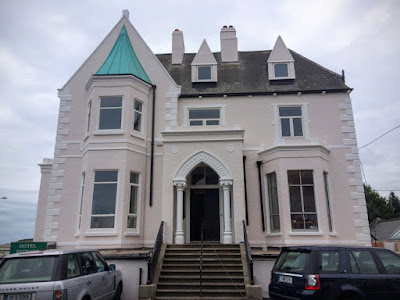 The Strand Hotel in Bray was once the home of Oscar Wilde’s parents (Photograph: Patrick Comerford, 2015)

During my stroll along the promenade in Bray late yesterday afternoon [16 June 2015], I noticed that the Strand Hotel is being renovated and a sign outside advertises that this was once the home of Oscar Wilde.

It is not surprising that in the past Bray has been home to several acclaimed writers, artists and political figures, although it is better known today for Olympians like Katie Taylor and musicians like Sinead O’Connor.

The Strand Hotel is often overlooked because of its more distinguished looking neighbour, the Esplanade Hotel, built as an elegant Victorian Hotel on the site of the old Coastguard Station at the end of the Victorian era in 1897.

In the past, the Strand Hodel prided itself on the personal, friendly service, its “olde world” charm and its warm welcome.

But the hotel was originally built in the 1850s or the 1860s as a private family home and was first known as Elsinore when it was owned by Sir William Wilde, father of Oscar Wilde, the wit, poet and playwright.

Sir William Wilde and his wife and Jane, the parents of Oscar Wilde, built a number of properties on Esplanade Terrace, between Victoria Avenue and Convent Avenue in 1863. Earlier on this site in 1835, workers unearthed what was believed to be a Roman burial site.

The Wildes built the properties as investments. The family is said to have rented Tower Cottage on the corner of Strand Road and Putland Road while their other properties were let out.

After his father died, Oscar Wilde inherited his properties in Bray. When he sold them in 1878 he ended up in court in Bray over some confusion. The estate agent accepted offers from two bidders, and the bidder who was later declared unsuccessful sued. Wilde won the case but was left with the court expenses. 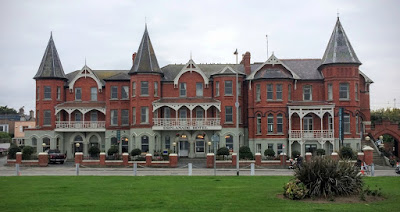 The Esplanade Hotel … built at the end of the Victorian era (Photograph: Patrick Comerford, 2015)

At the very end of the promenade, the Bray Head Hotel was built 1862, but it can hardly be said to be as well preserved as Bray’s other seafront hotels. But it has been popular as a location for many films and TV shows, including The Commitments, Breakfast on Pluto and Byzantium.

Other writers who have lived in Bray include James Plunkett Kelly, Lennox Robinson, James Joyce, who lived in Martello Terrace at the north end of the seafront, Sheridan Le Fanu, and Sir Arthur Conan Doyle, who lived for a while in Rahan House on Killarney Road. During his time in Bray, Conan Doyle worked on gathering photographic evidence for his theory of psychic phenomenon. He also taught for a while in St Gerard’s and wrote a book called The Coming of the Fairies (1922), that was a literary flop.

I must spend a little more time in Bray searching for the literary and artistic associations in Victorian and Edwardian terraces.

Meanwhile, a worker on the restoration project at the Strand Hotel told me late yesterday that many of the Victorian features of the former Wilde family home have been preserved and conserved, and the hotel is expected to reopen in the new year. 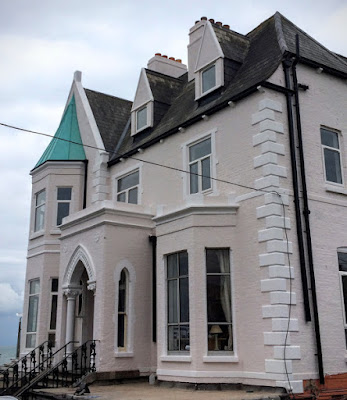 The Strand Hotel is expected to reopen in the new year after the present restoration project is completed (Photograph: Patrick Comerford, 2015)