A reminder of past sufferings
and the price of democracy 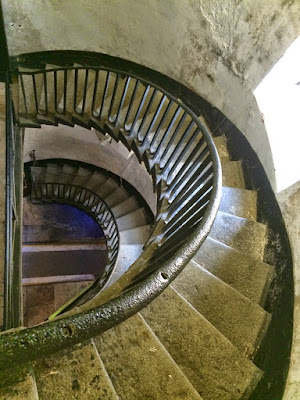 On the stairs in Wicklow Gaol this afternoon (Photograph: Patrick Comerford, 2015)

I have been careful to keep my views to myself about the main referendum in Ireland this week. Good friends know where I stand, but I felt it was important not to be seen to try to speak for the Church, and I remain open to listening to all points of view, and to hearing the nuances that can be expressed even in one voice.

But the participation in the referendum, the turnout of voters and the graciousness that marked much if not all of the debate show that the Republic of Ireland is a robust and open democracy. And that alone makes this a particularly pleasant society to live in.

Yet if two figures stand out as symbolising Irish values this week they are two people who do not have a vote in this jurisdiction: Prince Charles and Maria Cahill.

I am no fan of royalty, in any guise, and whatever I think about the second referendum this week on the age of presidential candidates, I am convinced that we have an excellent way of choosing the head of state in this society, and have been blessed with the present and two immediate previous Presidents.

I remain amazed that our nearest neighbours and best friends can continue to accept having an unelected head of state who inherits office irrespective of age – a referendum on setting the age of the candidate is impossible there. But I accept that this is their democratic will and choice.

On the other hand, Prince Charles has behaved impeccably during his visit to Ireland this week, and has behaved way beyond my expectations. He has been a force for reconciliation and a dignified aid to healing the bitter hurts and memories of the immediate past. Indeed, he has gone further than I might imagine myself going at this stage.

Maria Cahill once again has bravely stood up to Gerry Adams today, issuing a statement challenging the evasive babbling of a man who continues to deny the hurt he has contributed to since the 1960s.

Neither Prince Charles nor Maria Cahill has a vote in this Republic, but they have helped to free us from the way memories can imprison us in the past, and helped us to appreciate the beauty of a democratic and open society.

At one time, not only women and royalty were without a vote in Irish society, but so too were men of no property, peers, prisoners, lunatics and bankrupts. I was reminded of how backward we once were when two of us decided to visit Wicklow Gaol this afternoon. 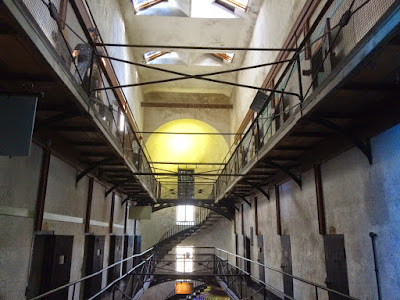 There has been a jail on this site in Wicklow since 1702, and the present gaol was first built in the late 18th century. Much of the present structure dates from 1842-1843, with major renovation work in the late 1990s.

The gaol finally closed in 1924, and the museum now tells a story of crime, cruelty, exile and misery, the harshness of prison life in the 18th century, the passion of the 1798 Rising, and the cruelty of the transportation ships that still brought the hope of a new life in Australia.

The smells, vicious beatings and torture practices, shocking food and disease-ridden air have long since gone, but I was vividly reminded how horrific prison conditions were, even after Victorian reforms were introduced. In the early days, all prisoners were held together– the sane with the insane, men with women, the tried with the untried.

The reproduction of the convict ship HMS Hercules is a harsh reminder of the 50,000 Irish people who were transported to Australia. But walking around this reconstruction and hearing about conditions on board, it was impossible not to think of refugees and migrants who are abandoned on floating prisons in the Mediterranean and left without hope or succour.

After our tour, we had coffee in the Jailer’s Rest café, and were joined there by Oliver and Kevin Conroy. 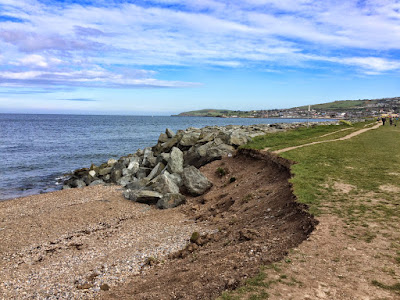 Later, we drove down to the harbour which is an interesting mix of a working harbour and a small marina for yachts and sailing boats. Alongside the gaol, the East Breakwater is one the important buildings in Wicklow. It was built in the early 1880s by the Wicklow Harbour Commissioners. William George Strype was the architect and John Jackson of Westminster was the builder. The North Groyne, completed by 1909, was designed by John Pansing and built by Louis Nott of Bristol.

From the harbour, we walked north to The Murrough, a grassy walk along the coast extending north to Kilcoole. But even along the path it was clear how erosion is threatening the coast and our inherited environment. 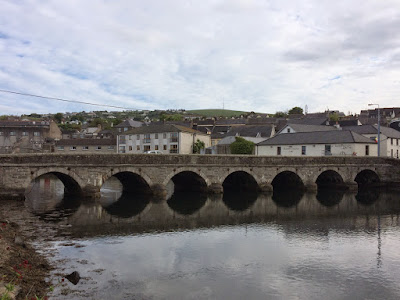 The seven-arch stone bridge over the River Vartry in Wicklow … known as the River Leitrim at this point (Photograph: Patrick Comerford, 2015)

After a short walk by the pebbly beach, we returned to the harbour, and I went to look at the seven-arch stone bridge spanning the River Vartry, which is known at this point as the Leitrim River. It was first built ca 1690 and widened in 1862. The bridge was built in two phases, with the first phase funded by subscription. In 1837, Samuel Lewis refers to an eight-arch bridge, so it appears that one arch was blocked at a later stage.

The bridge and quays make an important contribution to Wicklow’s townscape. The quays are also a reminder of the long history of Wicklow town as a port, dating back to the mid 9th century, when the Vikings took advantage of the natural harbour at Wicklow and established the beginnings of the town.

That too is a reminder of the diversity that goes to make up the island people of Ireland. We are a mixture of people, from Celts and Vikings, to Anglo-Norman, English, Scottish arrivals, Huguenots and refugees, to the new arrivals in recent years. 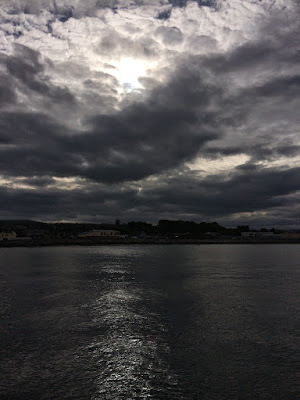 Sadly, opinion polls in the last few weeks show Irish people are not willing to take our share of refugees and migrants who are being trafficked in the Mediterranean. This may be a robust democracy and a tolerant society. But we are not as tolerant as we would like others to think we are.

I am loathe to quote Bertie Aherne. But there was more than a germ of truth in his saying: “A lot done, more to do.”