Amaretto and the ballot box 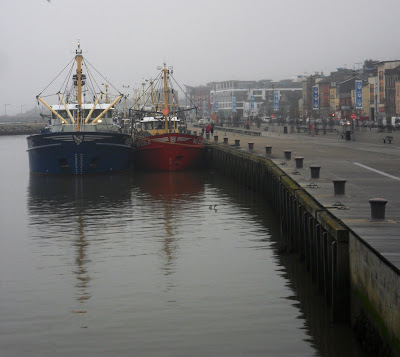 Mist descending on the Quays in Wexford this evening ... I wondered whether I missed the woodenworks (Photograph: Patrick Comerford, 2011)

After the morning service (the Litany) in the chapel this morning, and then voting early, I was going to go for a walk on the beach later in the day.

I headed south into Co Wicklow, thinking about a walk on the sandy shores of Brittas Bay. But we were there in less than an hour, and I had second thoughts – what about lunch in Wexford?

We filled up with petrol in Gorey, and then stopped briefly in Ferns to have a look at the castle, which has been restored sympathetically in recent years. Although I have regularly visited Saint Edan’s Cathedral and the monastic site in Ferns, this was my first time to visit the castle. 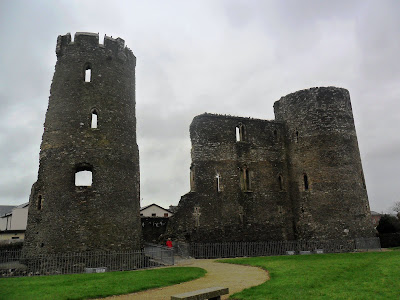 Ferns Castle ... includes what is often described as the most perfect chapel to be found in any Irish castle (Photograph: Patrick Comerford, 2011)

Ferns Castle, which stands at the top of a hill in the centre of Ferns, may date back to the early 13th century, and was possibly built by William, Earl Marshall.

Although only half the castle now remains, the castle was originally square-shaped, with four large towers, one at each corner and three floors inside. Some 13th century windows remain in the eastern wall.

The most complete of the remaining towers in the castle is the south-east tower. On the first floor, this tower includes a fine circular chapel, with moulded rib-vaulting, ornamented carving, supporting corbels in the shape of capitals, a piscina and a sedilia and eight carved heads. This is often described as the most perfect chapel to be found in any Irish castle. 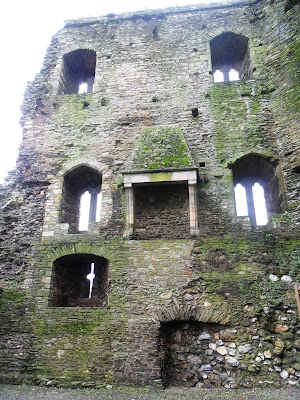 Some of the surviving mediaeval features of Ferns Castle (Photograph: Patrick Comerford, 2011)

The tower also has several original fireplaces, a vaulted basement, and a narrow winding staircase leading to the very top of the tower.

Another feature of the castle is a fabulous gargoyle extending out from the south side of the south western tower.

During archaeological excavations in 1972-1975, a rock-cut ditch was found around the castle walls and a drawbridge structure was found on the south side.

The castle ceased being a residence in the early 14th century, for the ditch appears to have been filled in by about 1310, and the building was in a bad state of repair by 1324.

Lord Grey captured Ferns during the revolt of 1536. But the MacMurroughs managed to remain there until 1551, when it was taken over for the Crown by John Travers.

The Masterson family held the castle from 1583 until 1649, when it was surrendered to Cromwellian soldiers, and it is likely that Cromwell’s troops demolished much of the castle.

Beside the castle is a modern Visitors’ Centre that houses the “Ferns Tapestry,” telling the history of Ferns in stitch work, from the arrival of Saint Aidan in 598 AD to the coming of the Normans in 1169. 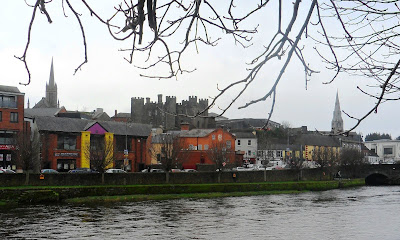 However, the Visitors’ Centre was closed this afternoon, and we headed on to Enniscorthy, stopping briefly by the banks of the Slaney at Templeshannon to look back at Enniscorthy Castle and Pugin’s Wexford gem, Saint Aidan’s Cathedral.

We then drove on along the banks of Slaney south through Oylegate and Ferrycarrig to Wexford Town, parking the car between the Crescent and South Main Street. 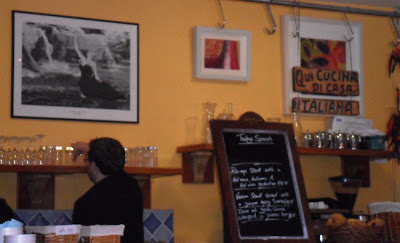 It was the first time in decades I had climbed up through the lower, covered steps of Keyser’s Lane, and we were soon in Trimmers’ Lane, within sight of the ruins of Selskar Abbey, in time for lunch in La Dolce Vita. This is one of the finest Italian restaurants – not just in Wexford, but in Ireland – and the walls are decorated with a poster and stills from Fellini’s 1960 movie. 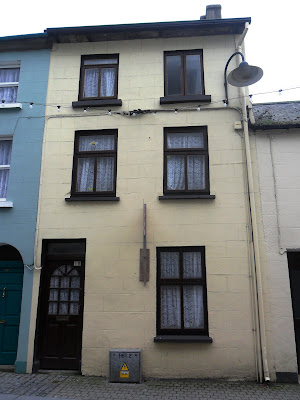 After lunch, we had a pleasant stroll through the back streets of Wexford, along Abbey Street and then passing by the small old, three-storey house I once lived in at 18 High Street in the mid-1970s. It is still on the market – although the asking price has now dropped to £75,000.

Saint Patrick’s Churchyard ... many of the heroes of 1798 are buried here (Photograph: Patrick Comerford, 2011)

We strolled on into Saint Patrick’s Square, stopping to look at the former Quaker Meeting House and to peer in through the gates at the ruins of Saint Patrick’s Church and the churchyard where the head of John Colclough is said to have been buried after his execution on Wexford Bridge in 1798. 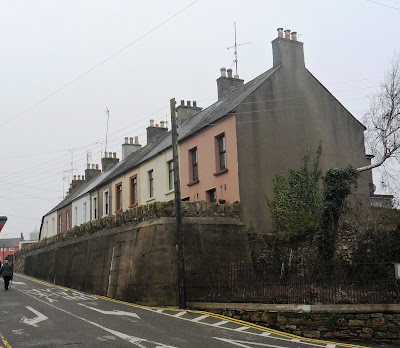 We then walked up Gibson Street to the Old Pound (Saint Peter’s Square), where Saint Peter’s Church once stood, and the curious elevated terraced houses of Clifford Street – one known as the “Deddery,” perhaps an allusion to a mediaeval grave site – to Bride Street, to visit Bride Street Church, or the Church of the Assumption.

Bride Street Church is one of Wexford’s “Twin Churches” – a perfect match for the Church of the Immaculate Conception in Rowe Street. Both were designed by AWN Pugin’s disciple, Richard Pierce, and built between 1851and 1858. In the grounds is an mediaeval altar from a former priory of the Knights Templar outside Wexford, later used as an altar in the Penal Days.

The nuns in the neighbouring Convent of the Perpetual Adoration made a stole that was given to me as a present by Canon Norman Ruddock on the day I was ordained priest. 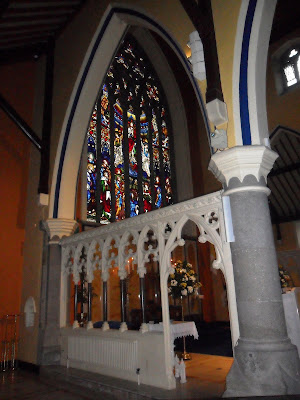 Bride Street Church ... one of the “Twin Churches” built by Pierce in the style of Pugin (Photograph: Patrick Comerford, 2011)

From Bride Street Church, we turned back into Saint Mary’s Lane, where once again we peered through the gates of an old mediaeval churchyard, before turning into Mann’s Lane and emerging at South Main Street opposite Oyster Lane.

I stood awhile looking at the former Mechanics’ Institute, where the Wexford People had its offices when I worked there in the 1970s, and then strolled down Anne Street, remembering the old County Hotel and the Shamrock Bar – long gone but still recalled in Billy Roche’s Tumbling Down – and was happy to see the old Presbyterian Church is still standing. This church, with a story that dates back to the 1660s, was rebuilt in the 1840s and is now a united Presbyterian and Methodist Church. This is the first church I was ever invited to preach in, by the Revd Robin Elliott in the 1970s. 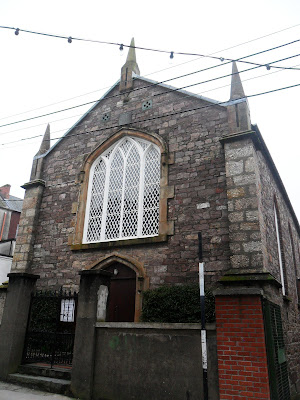 Wexford Presbyterian Church ... the first church I was invited to preach in (Photograph: Patrick Comerford, 2011)

Down on the Quays, trawlers were berthed at the end of a long day’s work. But the mist was beginning to move in from the east, and I imagined they had no other option for the night but to stay there.

I recalled childish pranks of placing penny coins on the tracks as trains were about to pass by, and wondered whether I miss the woodenworks – certainly the quays have lost some of the battered charm of the past.

Back at the Crescent, I recalled the well-worn stories of councillors who had proposed putting gondolas in the water for the opera festival, and wondering whether they would breed or take to flight.

It was getting late and the mist was threatening to turn to fog. There was going to be no opportunity to head out to Curracloe or Kilmuckridge for a walk on the beach. But the walk along the quays had been refreshing and invigorating. Instead, we stopped in Ferns again to see some old friends. It was dark, and we started making our way back to Dublin.
Posted by Patrick Comerford at 23:18 No comments: