A note on this evening’s
service and hymns

Domenico Fetti, Parable of the Wicked Servant (c. 1620) … from the front cover of this evening’s Order of Service

I am presiding at the Community Eucharist in the Chapel of the Church of Ireland Theological Institute at 5 p.m. this evening. The readings, Collect and Post-Communion Prayer at this evening’s Eucharist are those for last Sunday, the Thirteenth Sunday after Trinity, or Proper 19.

The Processional Hymn, ‘Lead us, heavenly Father, lead us’ (Irish Church Hymnal, 652) was written by James Edmeston (1791-1867), an English architect whose best-known pupil was Sir George Gilbert Scott (1811-1878), best-known for the Midland Grand Hotel at St Pancras Station, the Albert Memorial, and the Foreign and Commonwealth Office in London, and Saint Mary’s Cathedral, Edinburgh. Edmeston was churchwarden at Saint Barnabas, Homerton. He is said to have written 2,000 hymns, one every Sunday, but this is the only one to survive in popular hymnals.

We sing Gloria as ‘Glory in the highest to the God of heaven!’ (693). This was written by the Revd Christopher Idle in 1976 for an earlier tune, Cuddesdon, written in 1919 by the Revd William H Ferguson, who had been an ordinand at Cuddesdon Theological College, near Oxford.

For the Gradual we sing ‘I come with joy, a child of God’ (421). This is one of the well-known hymns by the Revd Dr Brian Wren, and moves from individual worship to the experience of community worship.

Our Offertory hymn is ‘Lord, as the grain which once was scattered on upland acres’ (430). This is an adaptation of words from the Didache by George Seaver (1890-1976), Dean of Ossory and the biographer of Albert Schweitzer, David Livingstone, Scott of the Antarctic and Archbishop Gregg. The tune ‘School House’ is by Thomas Wood of Exeter College, Oxford.

God our creator, you feed your children with the true manna,
the living bread from heaven.
Let this holy food sustain us through our earthly pilgrimage
until we come to that place
where hunger and thirst are no more;
through Jesus Christ our Lord. Amen.

The Unmerciful Servant, Sir John Everett Millais (1829–1896), from Illustrations to ‘The Parables of Our Lord’, engraved by the Dalziel Brothers (1864) … the back cover illustration for this evening’s order of service

Are we facing the Balkanisation of
these islands when Scotland votes?

The new school year is in full flight already. On my home from work yesterday [16 September 2014], the bus was full with teenagers from schools in Rathmines, Rathgar, Terenure and Templeogue.

Older generations may complain about their manners, their noise and their chatter. I was deeply impressed by their apparent blindness to racism. In their cheerful conversations, they seemed to be far more open and inclusive that my generation at that age.

Looking back, it seems the Ireland I grew up in the 1950s and 1960s was a deeply racist society. And that racism persisted into the 1970s … perhaps even later.

The generation before me, despite having lived through World War II, seemed to be unaware of the contradiction between the war against Nazism and the persistence of racism that was endemic in these islands in the decades that followed.

It was years before we realised that there was an unacceptable element in the “humour” of Alf Garnett, Steptoe and Son, Jim Davidson, On the Buses and Porridge.

But racism also boosted the efforts to define Irish national identity. Being Irish was confused with being “Green, Gaelic and Catholic.” Gaelic games were Irish, while rugby, cricket and soccer were “garrison games.” Some narrow-minded teachers, who were few but enough to remember, tried to render my surname into Irish, telling me it was, in their words, “Anglo-Saxon” or “Anglo-Norman.”

I was knew well that my surname is an English toponymic, and was proud of those origins. I found it difficult to accept that there had been 800 years of colonialism … 800 years of creative, fluid and perhaps even turbulent, difficult and violent relations, but I never felt I was the colonial sort or the descendant of colonists and oppressors.

Like others of my age, I grew up loving England, reading English comics and children’s books. I moved from the Beano and the Dandy to Look and Learn, the Eagle, the Hotspur, the Lion the Victor and the Valiant. I could name all the players who played with Roy of the Rovers; I was as fluent in listing the Kings and Queens of England as the signatories of the 1916 Proclamation.

When it came to the golden jubilee commemorations of the Easter Rising in 1966, I felt distinctively alienated. That summer, I was sent to an Irish College in Ballinskelligs, Co Kerry, because my mother was worried about my performance at school in Irish and thought I might fail the “Inter Cert” the following year.

One of the highlights of that summer, however, was cheering the English team in the 1966 World Cup final. I was comfortable with how close I thought Ireland and England were at the time. On the other hand, school companions who jeered what they hears as slightly English accent received an appropriate retort. I continue to resent terms such as “West Brit.”

I found wrestling with the inheritance of what I now see as the racism of a previous generation a difficult but important exercise. There were school debates about Enoch Powell and Ian Smith, but the clincher came, as far as I remember in a debate about Israel’s right to exist.

Earlier that term, progressive teachers had shown us Exodus one Sunday night. At the time, Israel seemed like a brave statement against all that was wrong with racism in Europe two or three decades earlier. It was a left-wing, European, socialist endeavour, I thought then. Little did I realise then how Israel would behave in this century, or the price for which Israeli statehood had been bought.

After school, I was happy to work and spend time living in England. I could feel at home in Lichfield. I travelled, hitch-hiked and youth hostelled all over England, and loved the place. There were regional differences between Ireland and England, but then there were regional differences within England too. I could not differentiate between England and Ireland in the way Irish nationalists tied to force us to.

I knew I was not responsible for some of the awful things some bigots did in the name of Ireland in England in the 1970s. Nor could I blame anyone in England for what was happening in Northern Ireland. I was politely asked to leave one party in England around 1974. But worse things were happening at the time, and it was not worth bothering about.

But I was embarrassed by a verse in the Irish national anthem that was seldom sung but nevertheless included the words:

Sons of the Gael! Men of the Pale!
The long-watched day is breaking,
The serried ranks of Inisfail
Shall set the tyrant quaking.
Our camp fires now are burning low,
See in the east a silv’ry glow,
Out yonder waits the Saxon foe,
So chant a soldier’s song. 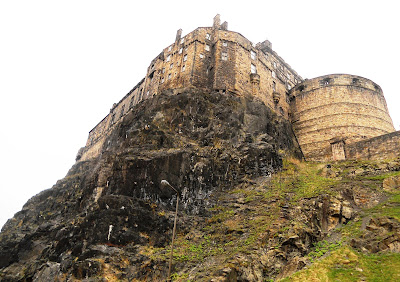 Edinburgh Castle, with its ancient battlements, is perched above the city on an extinct volcanic rock (Photograph: Patrick Comerford)

Naturally, I have been in Northern Ireland constantly throughout my life. I have been through Wales regularly, on my way to and from England, but I have also stayed in Llandudno in North Wales and Llandaf in South Wales. But I visited Scotland for the first time in March 2012 to give a paper at a church conference in Edinburgh.

Scotland votes on independence tomorrow [18 September 2014]. Whatever the result, the relationships between all the nations on these islands will be changed for ever.

If Scotland votes No, the divisions that have been created during this campaign may still prove irreversible.

The leaders of the main British political parties have behaved badly in this campaign. If the promise of further devolution was the right one to make, why was it not made long before this referendum? Indeed, if there are parliaments in Edinburgh, Belfast and Cardiff, why not devolve decision making throughout England too?

Why did the banks and insurance companies stoop to threatening Scotland and Scottish voters? This is a referendum, and it is the people’s choice. Banks should and must respect the democratic choice of people. They are there to serve society, democracy must never be there to serve the banks before the people. But then, RBS has already shown its contempt for people across these islands when its computer systems have failed and failed again, and they should be reminded that when their directors failed the bank, RBS was bailed out by the taxpayers, including Scottish taxpayers.

Of course we have been living with division and diversity for generations. Apart from Scotland, Wales and Northern Ireland, there have been peculiar arrangement for the Island of Man, which is always seen as part of the “Celtic Fringe,” which remains outside the normal political and economic structures of the United Kingdom, yet remains decidedly British.

Scotland will be deeply divided if there is a Yes vote. No voters have been told they are self-hating Scots – a phrase reminiscent of the label self-hating Jew used to marginalise Jews who are critical of current Israeli policies.

In a political union, you would imagine that all sides should have a vote. Why do the Scots have a vote on the future of the United Kingdom, without the English, the Welsh and the Irish (or some of us) being asked too?

When there was referendum in Ireland in the aftermath of the Good Friday/Belfast Agreement, voters on both sides of the border were listened too. Tomorrow, the majority of people on these island could have their future decided for them, without ever being able to cast a vote.

There are many warning that a Yes vote could keep Labour out of office in the rest of the United Kingdom for the next generation or more. But it should also be remembered that the SNP has been making economic promises that Margaret Thatcher would have been proud of, and has been cosying up to the likes of Rupert Murdoch and Donald Trump.

I have long thought all Nationalisms hold the potential for being evil. I fear the consequences of a Yes vote. But should a Yes vote come about, I hope the democratic choice of the people is respected, and that the new Scotland behaves not like a Balkan state but as a good neighbour, a dear friend and a family member. 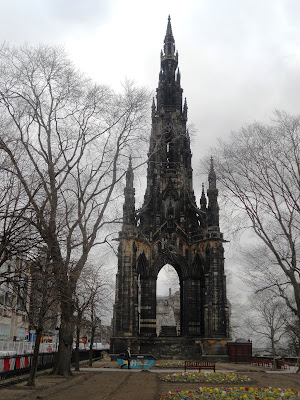