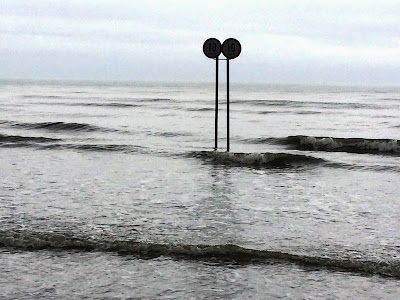 The grey waves breaking and rolling in relentlessly onto the grey sands beneath a grey sky in Bettystown, Co Meath, this afternoon (Photograph: Patrick Comerford, 2014)

The promise of summer that came with the sunshine on Friday and Saturday dissipated today as a rainstorm moved across Ireland today, and the clouds emptied along the coast this afternoon.

Some people may think that what we have experienced today is typical Irish summer weather. Others may wag their fingers at me and tell me I should be happy I’m not living in Serbia or Bosnia suffering through the storms and floods that have been rained down on the Balkans in recent days.

After a long working weekend, two of us headed off in the rain early this afternoon for a walk on the beach in Bettystown before lunch in Relish.

The Irish Sea was choppy, the tide was in fully, and the waves were rolling in relentlessly as the rains continued to pour down.

Well, at least the rain, the tides and the waves stopped cars from driving down onto the beach, which is one of my constant complaints about how the threats to this beautiful beach are being ignored by Meath County Council.

Co Meath has one of the shortest coastlines for any coastal county in Ireland, yet the vast, lengthy, expansive beach often appears neglected and abandoned by officialdom in the way cars are allowed to use it as a racetrack and one long car park, and pollution often goes unchecked. 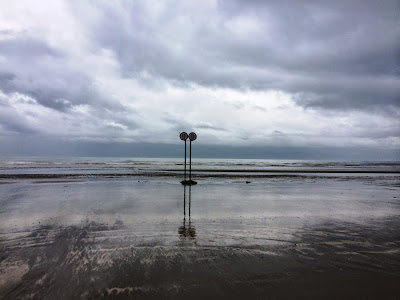 A second walk on the beach in the rain in Bettystown, Co Meath, this afternoon (Photograph: Patrick Comerford, 2014)

The skies were grey, the waters were grey, and the sands were grey ... except for the odd piece of colour on a sinking speed sign that seemed to be located inappropriately, it might have been a scene from a 1940s black-and-white movie.

Later, from the sheltered luxury of Relish, perched on top of the sandbanks looking out onto the waves and Irish Sea, we had lunch as we continued to enjoy the scenes on the sands below.

Later, we stopped again at Laytown, before heading back through Julianstown, Gormanston and Balbriggan to Skerries. 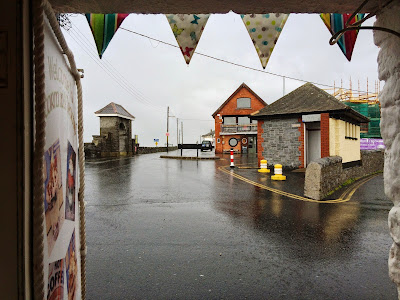 Looking out at the storm at Skerries Harbour from ‘Storm in a Teacup’ this afternoon (Photograph: Patrick Comerford, 2014)

Despite the rains and the grey clouds and sea, the harbour-side bars and restaurants were busy. We stopped at the slipway beside the lifeboat station, where ‘Storm in a Teacup’ was still busy in the late afternoon despite the storm that seemed to have hit the length of the east coast.

There we had two ice creams. Dressed and drizzled with espresso, cinnamon and chocolate.

The 1937 movie Storm in a Teacup, starring Vivien Leigh and Rex Harrison, was a minor British classic involving an Irish dog in a small town in Scotland. It is often regarded as the first genuine British comedy of the sound era.

It was once a popular Christmas-time movie in the early days of BBC television (in black and white). Looking out in Skerries on the grey skies and grey waters that were stretching all along the east coast this afternoon, I wondered when the storms would pass and when we would return to the days of summer with all the colours the sunshine brings.

And after today’s deluge, I wondered with humour whether I ought to have talked about the new movie Noah when I was speaking about Spirituality and Cinema on the morning of Palm Sunday during on the residential weekend last month [13 April 2014]. 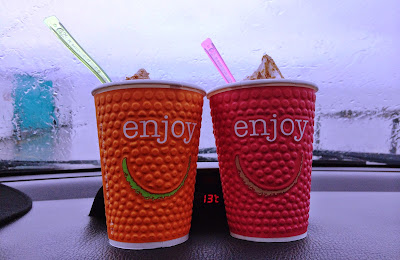 The promise of a summer smile … two ice creams, drizzled with espresso, cinnamon and chocolate, in the car in the rain in Skerries this afternoon (Photograph: Patrick Comerford, 2014)