Moving beyond tolerance and dialogue 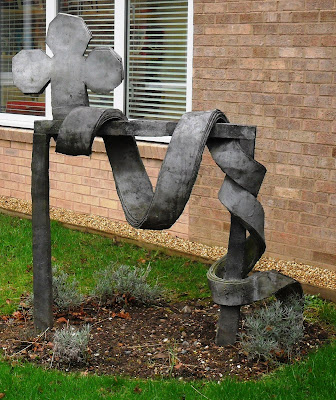 A modern sculpture at the entrance to Saint John the Baptist Church of England School in Clarendon Park Road, Leicester (Photograph: Patrick Comerford, 2011

Tuesday was another busy day for the half dozen of more people from the Church of Ireland taking part in an interfaith training programme at Saint Philip’s Centre in Leicester.

The headmaster of Saint John, Andrew McDonald, introduced us to the challenge and mission of a large Church of England primary school, working with the local church in a multifaith society, building relationships.

About 50 per cent of the children are Christian, up to 30 per cent Muslim, up to a 20 per cent Hindu, with some Jewish children and children of other backgrounds. As a church-aided school, the collective acts of worship at Saint John’s are Christian based, and while the school acknowledges it does not celebrate other faiths.

This is a high-achieving school, but he says values are as important as attainment at the school, which seeks to equip children for future generations, with a Christian ethos. 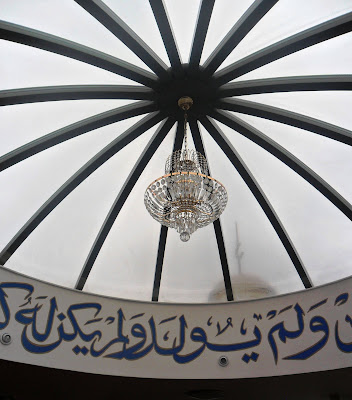 Inside the is the Masjid Umar, one of the most prominent mosques in Leicester, which is close to Saint Philip’s Centre (Photograph: Patrick Comerford, 2011)

After lunch at the school we returned to Saint Philip’s for two panel-led seminars.

John Florence, of BBC Radio Leicester, and Nick Carter, former editor of the Leicester Mercury, spoke on “The Media: engaging with faith groups.” Both spoke warmly of the role of the Church of England as the driving force behind interfaith dialogue in Leicester.

Later in the afternoon, four local priests – the Revd Bonnie Evans-Hill, the Revd Terri Skinner, the Revd Suresh Kumar and the Revd Canon Stephen Foster – spoke about pastoral issues in the multifaith context.

Each spoke from different contexts about the way in which the local church is recognised by people of other faiths as “a place where God is.”

Bonnie shared her experience of a monastery in Syria that was rebuilt with the help of Muslim neighbours, who live alongside and are part of the community. There, one of the monks made a distinction between tolerance, which he described as putting up with something you regard as negative, and dialogue, which may lead to compromise. Instead, he told her, the monks beyond these, and they were “living with our neighbour.”

Stephen said many of the problems in interfaith dialogue were often ones of ignorance or caricature. “But it’s story that brings truth,” he said. “The Church often asks the wrong questions. Sacraments are not the be-all and end-all,” he said.

To which someone added: “Eschatology is the be-all and end-all.” 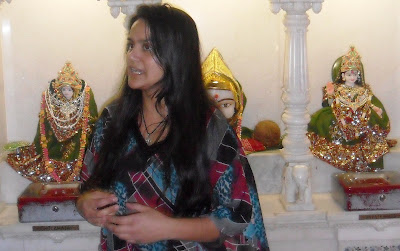 In the evening, we received a warm welcome at the Shree Sanatan Mandir, a large Hindu temple in a former Baptist Church in Weymouth Street.

We ended the evening with a vegetarian dinner in Amritsar, a Sikh-run restaurant, with further discussions over the table about Sikh faith and practices.

It was a day we had learned a lot about how Christians, Muslims, Hindus and Sikhs seek to move beyond tolerance and dialogue to living with one another as neighbours.
Posted by Patrick Comerford at 06:30 No comments: