A taste of the Mediterranean ... even
though Spring turns to Winter 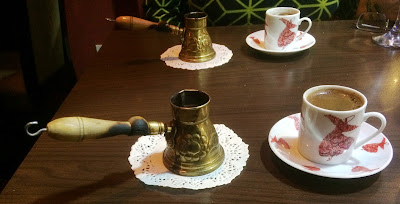 I know it’s the middle of Lent. But Sunday does not count. Does Saturday evening?

It would be a churlish to allow some coupons to run out, so two of us had dinner this evening in Aladdin’s Café on Upper Leeson Street. This is the heart of Dublin 6, opposite Christ Church, Leeson Park, close to Leeson Street Bridge and a stroll from Ranelagh Village.

Aladdin’s Café was previously known as Keshk, when it offered Egyptian, Greek and Mediterranean food in a tiny café. Today, as Aladdin’s Café, it is a friendly, relaxed and charming restaurant with an elegant ambiance, serving Egyptian, Turkish and Lebanese-style food.

The head chef and owner Alladin Selim has been in the restaurant business for over 20 years, and has now fulfilled his dream of running his own restaurant.

The Egyptian lighting and décor adds to the hint of this being the home of Aladdin with his lamp and his genie.

We brought our own wine, and finished with two Egyptian-style Arabian (or even Greek) coffees oin small Turkish cups decorated with Mehlevi dervishes.

By the time we had finished, it was raining outside, and cold. It felt like Spring had reverted to Winter. But a riot of daffodils had come to full bloom in a garden in Leeson Street and we had a good taste of the Mediterranean this evening. 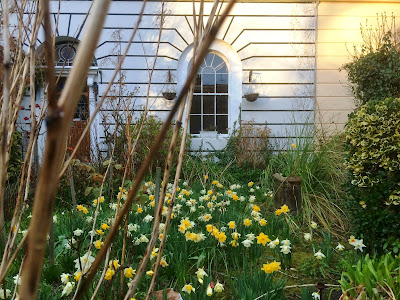 Daffodils in full bloom in a garden in Leeson Street this evening (Photograph: Patrick Comerford, 2014)

Email ThisBlogThis!Share to TwitterShare to FacebookShare to Pinterest
Labels: Dublin, Eating Out, Egypt

Art for Lent (18): ‘The Anxiety of
Saint Joseph’ by James Tissot

For the last few days, I have been writing about Saint Joseph and his relationship with Christ, looking at paintings that are appropriate themes for meditation in Lent.

This painting is part of the European Art Collection in the Brooklyn Museum, New York. It was bought by public subscription but at present it is not on public display.

James Jacques Joseph Tissot was a born in Nantes on 15 April 1836 to a family of Italian descent. He became a successful painter of Paris society, but following his involvement in the events of the Paris commune in 1871, he moved to London, changed his name to James and settled in St John’s Wood.

In London, he lived with Kathleen Newton (Kate Kelly, 1854-1882), a young Irish-born divorcee. She was called ravissante Irlandaise (“delightful Irish”), and Tissot was fascinated by the conflict of her Irish Roman Catholic background, divorce and status as an unmarried mother of two children.

Kate was 23 when she posed in 1877 for his painting ‘Mavourneen,’ a term of endearment derived from the Irish mo mhuirnín (“my dear one”), possibly a reference to ‘Kathleen Mavourneen.’ This was the title of a popular song, and a play based on the song was first staged in London in 1876.

They had one son, but after Kate’s death in 1882, Tissot returned to Paris, where he became one of the most sought-after realist painters, painting fashionable women and wealthy people.

However, one day in 1885, while he was carrying out research for a painting, he stepped into a church. There he had a profound religious experience. He left a changed man, underwent a re-conversion to Catholicism and devoted the rest of his working life to paintings of spiritual and religious themes. These included hundreds of paintings of Biblical scenes, particularly from the life of Christ.

Tissot died in Doubs on 8 August 8 1902, while he was living at the Château de Buillon, which he had inherited from his father in 1888.

In this morning’s painting, ‘The Anxiety of Saint Joseph,’ Tissot portrays Saint Joseph at his carpenter’s table, with tools scattered around him. His shop is small and cramped, with planks and pieces of wood everywhere, and shavings piled up on the floor.

The windows look out onto the busy, bustling streets of Nazareth, where people are going about their daily business. But in the middle of all this, Saint Joseph stands bent over his table. His bearded chin rests in his hand, his face caught in deep thought.

Tissot presents Saint Joseph as a man who speaks to our own time – a man for our age, this age of anxiety.

He already knows the threat of scandal that faced the woman he loves. Now he appears concerned with the worries that every father has for his son. Did he ask himself: am I ready for this? Am I good enough, strong enough, wise enough?

He already knows economic uncertainty –how to support and sustain his family, how to run his small business, how to pay taxes and “render unto Caesar,” what is to flee the terror threatened by a ruthless king bent on murdering children, what it is to be a refugee, an immigrant in a land that had imprisoned an earlier Joseph and had held his people as slaves.

Yet he must have reminded himself constantly of the message he heard so many times in the past: “Do not be afraid. God is with us.”